Over the last few years I have amassed a fair collection of 30mm models for the 'shinyloo' project. Most of these have been Stadden with a few Willie and some not quite 30mm Connoisseur or Hinchliffe 'Foremost'. The point being that they were all designed  before 1984 some having been sculpted  2 decades or more earlier.

However another maker from the latter part of that time  I have become something of a fan of is Barry Minot. Probably best known for his rather esoteric fantasy ranges, he had several ranges of 30mm historical figures out there as well. I am aware of 5 - though there may be others.

A Battle of Jena range of which I only have 2 examples.

A Zulu War range centred around Rourke's Drift- some lovely active figures though I don't currently have any.

A retreat from Moscow range with lots of cold looking French which I have and some predatory Cossacks which I don't. Those I do have need quite a bit of TLC before a public viewing.

A Sudan range - which I have seen pictures of.

A Waterloo range which a have quite a few of and are the pictures on this post. I would not claim to have them all as I only have  2 highlanders and by no means all of the British Infantry. Doubtless there are plenty of others to  find as well.

I love the movement of these blokes even if compared to some the small details may be lacking- but of course that means no buttons the size of golf balls or such other silliness and anyhow  you can paint the details in. It is not that hard. Or leave 'em off if you prefer.

All in all these Minots make a decent addition to the 'Shinyloo' collection.

Back in the Saddle 3 It's Showtime.

Bloody Hell I ache as if some unfriendly dude from a misspent past has caught up with me and given me a kicking. No he didn't, it just feels that way, after my first trade show for 20 months. Muscles I'd forgotten I had were forced to work for a living humping a van full of  soldiers to the trade stand  and then hump a (significantly lighter) load back again .

' Twas a fine show mind. Some cracking games. Battle of Dieg my personal favourite, very closely followed by a wonderful 40mm 18th century game  with two magnificent ships. There was a rather nice Sikh Wars game as well. Oh and a 54mm size Ancients encounter with a big elephant and some Persians. Doubtless there may have been assorted dwarfs and spacemen on other tables but I  didn't see 'em - didn't look either.

So Partizan is back,  a show that treats you like an adult- well mostly-  and welcome it is too. Saw a whole host of the 'usual suspects' ,chaps I'd not seen for  two years or so.

See here for some pics of the Battle of Dieg game

Mind you, we- Jim and I had a bit of strife- the Van Hire outfit wanted the drivers NI number - which is not something you usually carry about with you - well I don't nor did Jim- so a job that should have take a couple of hours took 4  and a twenty quid cab fare , which we could well have done without but all went right in the end.

The show was very busy until mid afternoon when I got a little wander - would have taken some photos but to add to the amusement my phone snuffed it inconveniently, no worries Facebook and other places have plenty of pics about.. Worth checking out if you didn't make it. There were games I didn't get to see so I will be having a butchers myself when the pain dies down to a dull ache !

Nice to be back and a good show to start on as well.

My next is Salute which for the record will be my last Salute  as I am pulling back from long distance shows. 6 hours each way in a van is no longer my idea of fun so next year I shall be restricting my show travelling to roughly speaking 'England Above Trent'

Spent much of yesterday- when I wasn't on the phone- sorting out new bin stacks for ranges added during the past couple of years that have not- so far- been to a show.

The list was surprisingly long so it will mean that we will have to drop some other ranges off the van to make room for the new stuff for Partizan in October. The ranges dropped will be form our 28mm lines and with one important exception all the new stuff added will be 15mm .
The added ranges are
Blue Moon 15mm.
HYW Crecy and Poitiers period 35 pack range including Scots, Germans, Spanish, Low Countries as well as English and French.
HYW Agincourt period- just in -16 packs for the earlier 15th century.
ECW Scots covenanters added to our substantial ECW range which now stands at over 60 packs including artillery pieces.
French Revolution French and Austrian Infantry and artillery and Vendean Rebels- a very few of these had just come out before shows stopped.
Napoleonic Spanish- now a substantial range of around 30 packs including cavalry militia and of course guerrillas.
French Imperial guard cavalry.
The Indian Mutiny- just in- 26 new packs of miniatures for both sides use Napoleonic guns .
Sash and Saber 28mm
The French and Indian War - almost 100 packs of figures for this popular conflict.
So that is about 200 or so new packs of miniatures that have never been to a show. It will be a new experience for them!
Like
Comment
Share
Posted by Big Andy at 03:36 No comments:

Back in the Saddle. 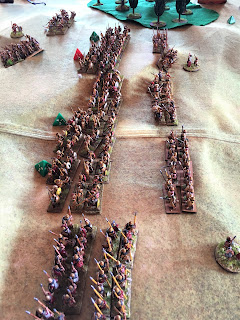 Happily that is not the case, so when the Tantobie Warfare And Tactical Society had the chance to re-activate its monthly meetings we  agreed - not least because of the lure of Landlady Jean's Beef Butties

However there was a snag - only 3 of us could make it due to other chaps having work commitments so we decided upon a 15mm Peloponnesian War encounter as Mechanical Shaun has more Hoplites than any sane man should have, so it was a piece of cake for him to provide Spartan and Athenian armies for the coming encounter. ( Ignorant games loonies please note, these are not mere gaming 'factions' but the armies of two Classical Greek City states. Read a book why don't you?.)

Tactica - being our usual go- to set for Ancients games- was the chosen rules set as it's style and mechanisms really do suit Classical Warfare. Nevertheless Gentle Reader you good Umpire will admit to being a tad 'ring-rusty' here so it took a while to get properly back into the saddle. The scenario was deliberately over simple for that reason.

Basically the scenario was built to get a Hoplite  slogging match  with 2 armies that were fairly evenly balanced. Differing only in detail. The idea was simply to get us back into the wargaming saddle after a lay off of 19 months.

Mostly it all came flooding back- especially after the application of throat lubrication in the form of Consett Brewery's fine light ale - lovely 'session beer'  not too heavy so easily quaffed brought all the wargamey stuff back into soft focus.

Oh and the game?  Shaun won the Hoplite grind by ranking his troops deeper - Theban style- 4 ranks deep on the table despite some early bother with Andrew's  peltasts. He had forgotten how effective they could be-  but in the event they were only a nuisance.

As usual a good time had by all and thanks as always to Landlady Jean  for looking after us.

Next in the chair is Andrew with a Cold War Naval encounter ......

A few more for India.

So ever so slowly the various 'India' projects grow. Now regular readers might have noted previously that I'm a bit of a butterfly painter- I land upon what I want when I want and brushstroke boredom is my avowed enemy. Nevertheless slowly armies appear.

This batch of pics are all of Old Glory 28mm models though some have had minor conversion work such as adding muskets or shields. They come from a variety of packs . Sikh High Command Sikh Ghoracharra cavalry and Persian High command.

I find the results rather pleasing so I shall go off and do a load more ...... 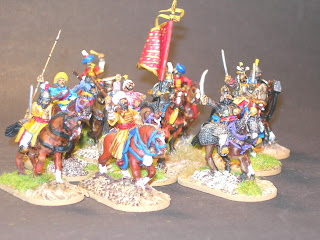 The two  pics are the same but with different lighting effects.
Posted by Big Andy at 07:41 No comments:

I  managed to base all 20 of the 3rd Light Dragoons for the Sikh Wars collection over the weekend.

The figures were painted for me by David Allan who has painted stuff for me previously. Most notable some rather nice ECW cavalry and some 40mm French Hussars which I no longer own . 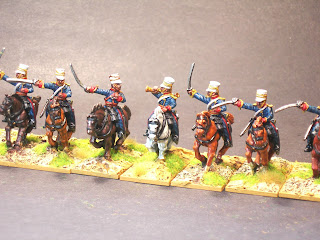 I have organised these in 2 10 figure  'wings' as the regiment began with four Squadrons when it went to war in 1845 around 500 or so strong but operating in wings was not uncommon. 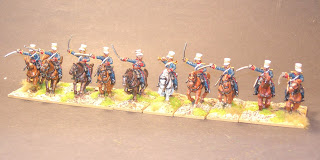 Jim and I now have between us about enough for a small introductory game for the period though both of us are still painting. I'm doing some Sikh irregulars and the 24th foot  plus some more British artillery. Jim is doing Sikh regulars. 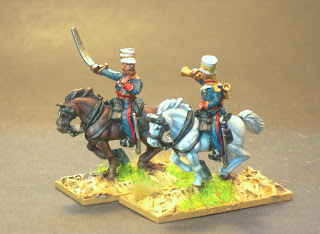 Published- and in my grubby mits too! 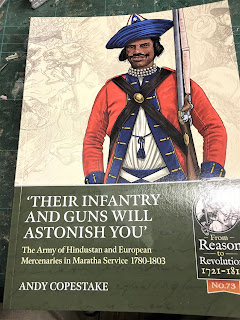 The colour plates by Giorgio Albertini look splendid and as usual Helion's productio values are right up to the mark. Of course now all I have to do is source some figures for the various armies ......