Catching up on my Reading 3

I have had an interest in the late 17th century for some years- even though I currently own no armies for the period.  I have on my libraru shelves a good few of the books of the period. All of the usual suspects in fact. McNally Borrett, Childs, Lenihan Sapherhson,  Hall, Walton and Mahan(for the Naval side) to name but a few. I used  to be in partnership with Rob Anderson of Reiver Castings- we founded the company together- but could not give it my full attention  so sold my share to Rob some years ago. Rob is still a good mate in case you were wondering.

So from that perspective  I have "form" so to speak so Barry Hilton't  "Every Bullet has its Billet  was if interest to say the least, especially as I am currently considering building armies for the Killiekrankie campaign. This last partly because I already have a bundle of Highlanders. 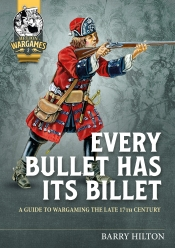 The rather slim large format book looks good well up to the usual Helion standard. It is bright, full of eye candy and very colourful . Some might even say "inspirational". The actual text begins with a lightweight introductory gallop through some late 17th century campaigns, and none the worse for that if you are looking for a brief and not too taxing way into a new period.. For me this told me little I did not already know . The same goes for the chapter "Participating forces"- You will need to read more deeply to get a better picture but than what else would you expect.

However the real meat of the book- and there is some- are the chapters "Gaming the Period" and "Building and using a Force". This is where the book really scores- far better than I expected. I was particularly impressed by the section "Transferring Reality to the Tabletop" which every wargamer who  is more than a mere dice roller should read, mark, learn and inwardly digest. The photos here are particularly instructive to anyone who has little idea of how much space real units take up on a real battlefield.  I may not share Mr. Hilton's approach on all of these matters but here there was significant agreement. The book is almost  worth the cover price for this section alone. The book also contains a couple of scenarios

This does not mean the book is faultless. I'm afraid I found the Naval section - while still very  useful- a little  like the Curate's Egg . I'm afraid the over enlarged photos of the tiny 1/2400 scale-  ships made them look  more than a little clumsy- which was unkind to those little models.

The three scenarios- one Naval and two land are all tied to rulesets published by Mr. Hiltons company -  not sure if they would translate to other systems as I am unfamiliar with all three of the sets. Though the Donnybrook game should  probably easily translate to any reasonable low level skirmish system. As for the battle scenario I can't tell. Personally I feel the 12-18 figure units are a bit on the small side but then I like larger units for most periods.

The painting guides are useful  for those who don't know what paint feels like but again there is nothing useful there for veterans such as I. I have more paint than I can shake a stick at  and don't need to be told what size brush to use either. I know some chaps like such simple " How to's" but not me- been in the trenches too long.

The book finishes with the usual lists of products and resources which the new gamer will find useful. As you might expect this was somewhat selective perhaps reflecting some of Mr Hilton's preferences

Now before I continue I must admit to a bit of an interest here.   Just to make it clear. I am Old Glory UK.

It is interesting that the "Miniatures" list details quite a few makers - perhaps most of them (Minifigs and Hinchliffe being absent despite the latters range of Poles and Ottomans and I'm pretty sure Minifgs do Ottomans and Marlburians and there may be others I am not aware of).  but while the mentions  in most cases give at least some details of what those makers produce - pertinent to the period- three in the list do not rate such detail- Front Rank, Reiver Castings and Old Glory. Reiver's range is extensive- Rob has expanded it far beyond what existed when we were partners in the venture including such esoterica as the Scanian War as well as models that I'll be using if I get the Killiekrankie project off the ground. . Front Rank likewise has an extensive range including some lovely Monmouth Rebels. As for Old Glory, well we have an extensive Ottoman range, the WSS and Pirates- as mentioned-  but also Poles Muskovites and Cossacks- all in 28mm Not to mention the Pirates- and ships- in the Blue Moon 15mm range as well as WSS and GNW  under the same Blue Moon label. Oh and a 10mm Marlburian range as well.  However this is merely personal nit-picking. So I will add a few pics to this post as extra -eye candy !

So  do I recommend the book? - well yes, given the above reservations-  rather surprisedly I do . It was much better than my first impressions and while there was not a massive amount in there for me personally it will definitely be of use to a newbie in the period.

However as always it is wise to be aware that there are "more things in Heaven and Earth than are dreamt of in your philosophy"... and that goes for all of us.

So Merry Christmas one and All...

So it is THAT time of year again another December 25th looms. The Ebeneezer Scrooge Christmas Appreciation Society is in session. Not that I mind a bit of Crimbo cheer and to that end our last posting date will be December 19th. as Carole and I are having some time off. No more little soldier for a bit.
Orders received after that date will not be posted until after NEW YEAR as I reckon they are safer in my stock room than kicking about the countryside and in various Post Office and Royal Mail sorting offices - or worse in some couriers van.
We will be back to work properly around Jan 4th and first posting will be around that time.
Hope you all have a geat Crimbo - covid not with standing. Personally I am looking forward to a bit of peace and quiet- and maybe the odd tincture .....
Posted by Big Andy at 07:20 3 comments: