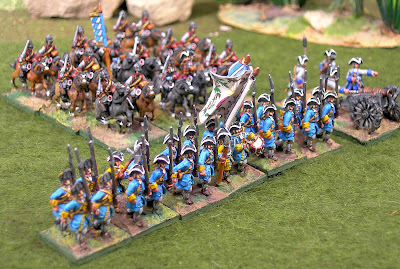 Well there you go . I've now officially started a 15mm Marburian project- don't know where it will end- simply because I'm not one of those tedious chaps who plans out his army to the last button before starting out. Thats no fun - part of the interest is the journey, not merely the destination, actually playing with the little lead monsters is only a very small tip of a much larger intellectual iceberg and often not the most interesting tip at that. So now John has painted me some Bavarian Curassiers and Guns to go with the first infantry and is doing another infatry battalion I have a beginning. Hardly an army yet but enough for the display case at shows - my next gig being Salute in April - and yes this will expand as a chap who never really cottoned to 15mm I do like these little fellas.
Posted by Big Andy at 03:19