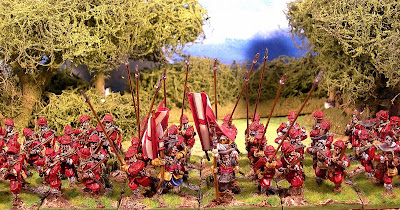 Well after seeing about one- hundred and eleventy twelve assorted blogs about various forms of wargaming and model and toy soldier collecting I thoiught I'd have a punt myself.
Now as I'm in the toy soldier business I'm probably a bit biased in my views- but then who isn't. At the least I can usually say that I know what I'm talking about- well mostly anyway- I have a background in History and Art and a history dergree for my pains but failed a post grad teaching thingy as I hated it. was a civil servant for a while spent a few month in an ad agency as a gopher did a summer as a hod carrier- hardest work I've EVER done - respect to brickies !!! Worked night shift in a 24 hour gas station- while running a model building company at the same time until finally getting the chance to run Old Glory UK in 1992 which I've done ever since. Married to Carole for 20 years loved every minute !!
As a wargamer and military modeller/ historian I've had a collection since about 1970 but don't have any of those old figures left.
My interests in wargaming and Military History can best be summed up as
"The Campoaigns of the British Army and Warfare in the British Isles" and I frankly don't have much time for fiddling about with Dwarfs and other silliness- though if pressed will admit to having a small SF collection .
I would not call myself primarily a wargamer but rather a historian who plays with toy soldiers. The history part is more important to me than the gaming part.
As for this blog its a bit of an experiment. I'll mention my projects both commercial and personal in my wargaming and military modelling world. Doubtless my views will be sometimes controversial and oftentimes suphurous ! PC will NOT be a feature but then niether will narrow mindedness either-0 as a mate of mine often says- if it blows ypour skirt up- go for it.
Andy
Posted by Big Andy at 02:06