Here are a couple of pics on soon to be released  Drabant 28mm Normans . The Dark Ages range continues to grow and I'll have these sometime in October along with the new Vikings already mentioned in an earlier post 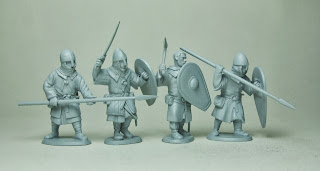 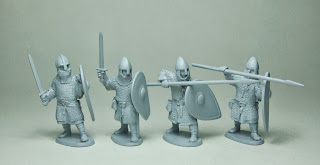 The 2 sets show both armoured and unarmoured Infantry and would fit into any  Feudal Western army from about 1050 onwards.  up until about 1150 or perhaps a bit later on the fringes.
Well up to the Drabant standard.

Now it can hardly have escaped your notice- Gentle Reader , that Skytrex have gone into administration. The individual ranges have been up for sale for some time and some have moved on to other homes.
In MW 366 Neil Shuck  comments upon this and opines that  his interest was in the 15mm Command Decision range and that its a shame to see them go...
Well of course they haven't gone anywhere- they've been here all the time.
So for the record here is how it  currently stands
The Command Decision range was originally a cooperative effort between ourselves- ie Old Glory and Skytrex. This was so from the 90s when the range first appeared.  We made the infantry Skyrex made the vehicles both companies sold  the range in its entirety.. Latterly the ranges have diverged a little-  Skytrex made some vehicles we never got and latterly we made some WW2  vehicles  of our own- Russian Heavy assult guns- and a Katyruska rocket  truck US M-18 Hellcat  and about 30 other WW2  vehicle packs as well as adding modern infantry and light vehicles in the CDMOD and CDMV ranges.
So Command Decision is alive and well.
Again for the record We are continuing to produce and sell the CD range as it is manufactured in the USA  as we have done since its inception and for the forseeable future. Old Glory UK  will be carrying all we have at the World Wargames at Donnington next weekend- there should even be some modern additions. 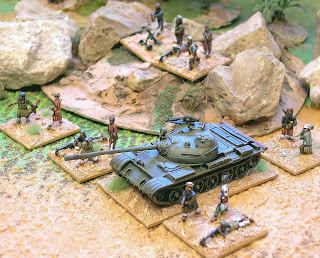 So here are a couple of somewhat venerable pics  of  15mm WW2 and modern  items from the Command Decision range- all still available from Old Glory and Old Glory UK.
Posted by Big Andy at 05:11 No comments:

Just a quickie before I nip off to cast some Helicopters
Here are some of our African Geurilla  figures in 15mm from packs CDMOD9  and CDMOD 10
These were painted by Jez Griffin of Shakespeare Studios and they really look the biz- How long can they survive against the Fireforce.... well thats for another time. 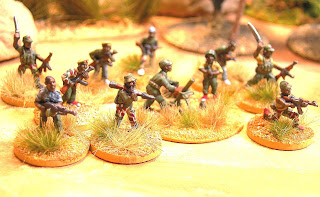 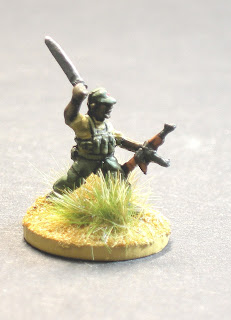 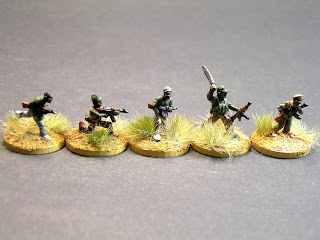 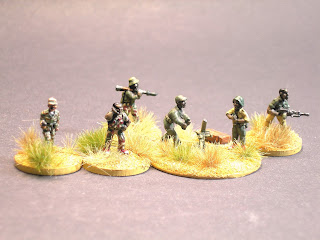 CDMOD 10  is the weapons and command pack containing the mortars , LMGs and RPGss .
I love the way Jez has given some of  of the figures Trainers tather than boots
as well as the use of differentr camo patterns. Nice !
Posted by Big Andy at 04:17 2 comments:

This took some thinking about.
I know there are chaps who are uncomfortable with more modern conflicts. For myself I'm not particularly- after all when I was a lad WW2 was  only a quarter of a century in the past and plenty of people wargamed it. It was called "Modern Warfare " then - or at least the Rules often were- see Don Featherstones books- and of course he was there.
So  I thought quite a bit before deciding to do a 15mm Falklands War range but after 30 years perhaps its time.
After all my late Stepson Sgt Nick Chambers- Grenadier Guards got his Falkland medal with 3 Para- and yes I have it and his para wings still- and a 3 Para Tie which I of course don't wear- not in the least entitled. So in a small way this range is in memoriam of Nick  as he also was a sometime Wargamer- there will be a few chaps who remeber him with us at shows and some from previously when he was an early memebr of the 68th display team and denizen of the Wargamers Den
So I know he wouldn't mind a bit. 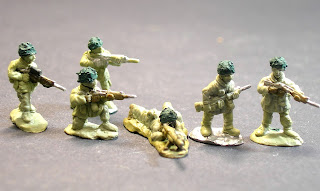 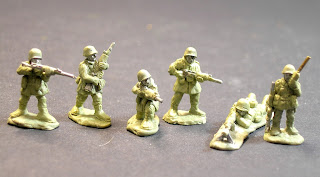 We have here , therefore pics of 12 new masters- 6 British 6 Argentinian. Ohters will follow as will vehicles- a Landrover is already under construction as are Scorpion/Scimitar


I should have these in time for Derby with luck along with the new Vehicles for more modern conflicts
Posted by Big Andy at 07:19 3 comments:

For your Future Entertainment.... 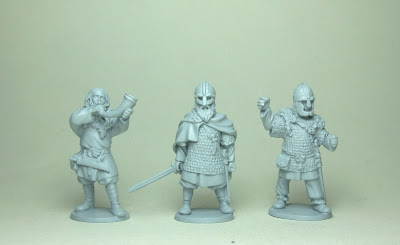 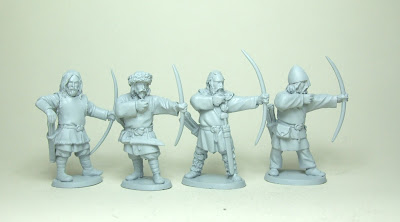 These two pics show the latest additions to the fabulous 28mm Dark Ages range. Viking Command and- obviously Viking Archers. Well up to the standard I've come to expect from Drabant. Nick is promising some Normans next and I hope to have these sometime in October. 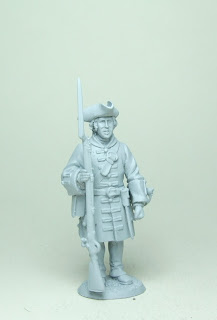 Finally  one in 40mm- another for the Marlburian range- which continues to grow slowly - another English Footguard hatman. Can't wait to see 'em in the flesh.

Of Miniatures, Ministers and Morality.

First a bit of sadness.Doubtless it has not escaped you attention that Donald Featherstone has passed away.
I had a couple of conversations with him in the  early 1990s- I remember he complimented my 25mm Napoleonics ! and we discussed books on 18th century India.
Whilst I've never been one for heroe worship of any kind there is little doubt that Don gave the hobby a massive boost and set it on the commercial path  with his books in the 60s..
His books certainly set me on the path.

Like most of his generation he had served in WW2- largely in Italy and in our conversations I never got the impression he had any problems with the "morality" of our hobby - not that it ever came up directly  but even in old age he still had a "taste for the game" as it were..
Rest In Peace.


So think about it dudes . If chaps like Don- who has "seen the Elephant"  have no problems with this hobby- and a goodly number of other soldiers - both past and present don't either (and at least one Marine of my aquaintance -can't call him a Soldier!! ) then why should we.
The recent spate of agonising over the"morality" of our hobby reminds me of the 80s - I had more than one brush with the peacniks who were mostly badly informed fools who opined that if there were no soldiers there would be no wars apparently Soldiers make Wars - the less said about THAT piece of Twaddle the better.
They seemed to have much the same attitude to battle as the Victorians did to sex
"Look Away dear it's not happening " (quick nip round the back door ....)
In a way this is exactly the same as political Morality
Ministers of the Crown are quite capable of looking away when it suits them . After all there is no morality in politics there is only power and its use and abuse .Politicians of all colours are good at telling us how we should behave  but often dammed if they will behave that way themselves.
So when it comes to our harmless little hobby  I don't give a monkeys what someone else will or won't do or does or does not find offensive as I find none of it bad enough to really get steamed up about. But for the record there are bits I find a tad distasteful.- in no  particular order.

WW1 Western Front- don't play that  wholesale slaughter.
I don't use SS or flamethrowers in WW2 games- indeed I'm fairly picky about WW2
I find the darker side of Games Workshop quite disturbing- I'm finding out about this from a relative and it seems that teenage boys- and some older seem  obsessed with  cruelty and torture. There are no "good guys" in the 40K dystopia
This is very very odd as when I was their age I was obsessed with knockers , kachungas, berdooblies in other words crumpet!
GW has a lot to answer for....


When it comes to modern games- these are the nearest I get to fictional countriesand I tend to treat them in much the same way a modern techno-thriller writer would- get the tech right but the plots are fiction.
Indeed other than refights that pretty much sums up most of my games.
Not that I'm playing much at the moment far too busy...