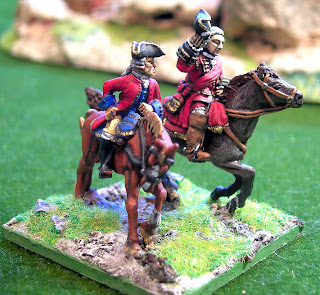 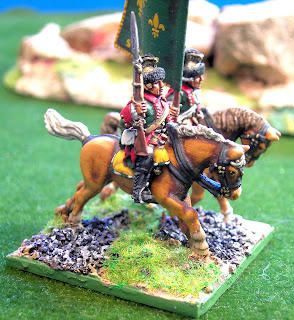 Well that's May as good as over. Its been a busy month what with 3 shows and all the normal Mail order to deal with. Two shows in 2 weekends in the same catchement area - not wise- I'm talking about triples and Partizan - about 40 miles apart on successive weekends. Needless to say both shows suffered and between the two made up 1 decent event between 'em .
My next show is the Durhan Open day on the 11th June. I'm not trading but as usual running a game. Though some lads always seem to oder gear which I'll happily bring along . This year it will be an 18th century affair - very loosely based on Fontenoy using a slightly modiefied version of Warfare in the Age or Reason but with proper sized units.
There will be about 700 figures on the table or thereabouts and I've modiefied my origonal scenario to leave out those Front Rank cavalry units.
Here are a coupl of pics to show what I mean. The Dragoons de Saxe are superbly painted but still somehow lack any life. The Irish Brigade staff group has 1 FFront Rank fig and 1 Old Glory - the OG boy simply stands out as more natural. It used to make my blood boil when OG used to be poorly compared to FR . Now I know that they just were not looking so sod 'em !
Posted by Big Andy at 01:22 2 comments: