Maurice and the Curates Egg.

Our latest attempt to find a decent set of 18th century rules other than the somewhat dates Warfare in the Age of Reason led us to getting Theatrical Steve to run a game of Maurice- the 18th century game by Sam Mustapha.. Steve has used these rules quite a bit so should know his way around them but they were new to the rest of the TWATS.
Now we've only played the one game and overall there is a lot to like here but equally some strange bits of complete tripe too
So Tripe 1 Organisation- all units are "4 bases" which seem to represent eith an infantry battalion or a cavalry regiment. Now other rules do this and for much of the 18th century it is tripe. Cavalry were -in contemporary documents usually counted by Squadron not regiment- as the number of squadrons in a regiment could vary widely between time and place. So many French cavalry regiments were only 2 squadrons- though some were 4 and the French massed their cavalry by Brigades of around 8 squadrons British cavalry regiments were most often 3 squadrons- though there were exceptions - a very few Prussian regiments were 10 squadrons. Average Cavalry unit strengths varies much more widely than infantry battalions yet here we have the same old saw as perpetrated in many rules (AOR included) of infantry and cavalry units being the same strength-  they can even take the same number of hits ... Hmmmm.
Good bit1 The card driven system is actually interesting and keeps you alert. The various cards can mitigate or otherwise the nasty habits of the odious cubes(that 's dice to the rest of you!) so give that you have the good fortune to hold the right cards at the right time then things can happen. This is the major point of this system and goes a very long way to mitigating some of the tripe.
Tripe2- No continuity- you can issue orders to a unit or brigade to advance- or even-in certain circumstances your whole army  but that is only for 1 move- they forget the lot next turn. This also applies to artillery who can be given orders to bombard but you have to repeat yourself every time you want them to fire - unless its canister. Since any commander can only issue 1 action per turn this leads to a very bitty action with no planning even remotely possible unless you happen to get the right card at the right time-and can play it.
If you don't get the right cards in even roughly the right order pack it in and save yourself some time. This is overly harsh but you MUST have the right cards near games end or all you may or may not have achieved previously is for nothing.- though the odious cubes also have a deliterious effect too. I lost7 army break points in 1 turn when up to that point had lost none- so I threw my hand in which at the time had only 1 useful card- of 4  sop could not advance to finish off the French while they had more and more useful cards.
Not sure if this is actually a wargame- its more like bragg or draw poker. The model soldiers are irrelevant so like many "games" today it joins the anti-soldier crusade.
Nevertheless with a bit of tweaking it could be made into something very tasty indeed and is definitely worth further investigation. For smalller sizes-15mm and down it could be the answer if we can sort out the organisational trouble and some of the lack of continuity in the orders system .
I'd give it a cautious 7/10
However after a little thought here are a couple of amendment ideas
My biggest bugbear was the simple fact that sub- commanders seem pointless as they cannot perform any actions so how about making the total number of actions per turn equal to the number of sub-commanders so in the case of our first game 3 per turn since this includes such things as artillery fire and rallying as well as movement then this might make things move along a bit. However I'd add some severe codicils and limits so no sub- commander could do more than one action in any turn and  drawing new cards would be limited to the number of the most "costly" action . Still thinking about this.
Equally I'd allow artillery to keep firing at the same target after the first fire without needing an action BUT if they wished to change targets that would cost an action.
Also in order to make an action the sub-commander would need to be within command distance of the CinC- so cards would need to be spent. This would simply give more options and continuity.

As for the game itself in actual toy soldier terms it was pretty small- each british infantry bigade being only 3 battalions of 16- orrible to look at and cavalry units of 12- but since the soldiers are not pertinant to the actual gameplay then I don't know why I'm telling you this .....
Mind you a minor miracle occoured Jim the Builder actually managed to turn up- thats 2 games in the last 2 years Jim- both in the last 2 months !!

Some few weeks  ago I discovered , in the back of the Garage a box of scenery I'd half-forgotten was there.. In it lay treasure!
Back in the late 1970s I'd boght a bundle of the then still in production Britains trees , hedges and walls. I'd added to them in the early 80s during my flirtation with WW2 skirmishing in 54mm. All those assoRted figures and building are now long gone- though there is a photo of one of the games in Mil-mod I think - that we did at NortheRn Militaire one year when I was a member of Durham Wargames Group.
However the trees somehow survived. The dammed things were all in bits and covered in dust , casting talc and not a few spiders but after a couple of days sorting through them I re-assembled most of them. The cold had got to one or two and made the plastic a bit brittle so I lost a couple but once assembled they do look the business and by no means out of place with the 30mm "Shinyloo" British in the photos. I could also of course use them for 40mm 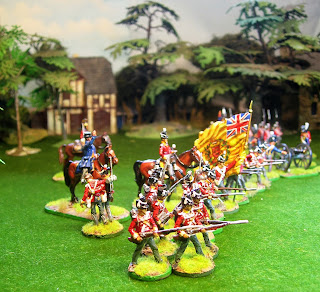 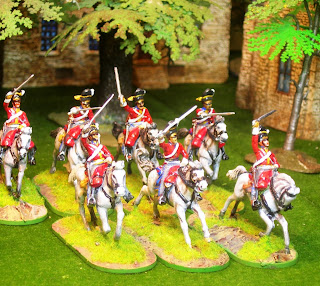 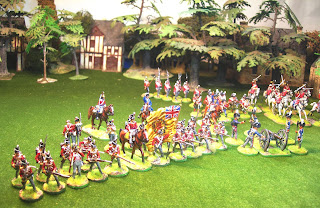 I've had this issue for a couple of weeks or so and frankly was- at first a bit puzzled by it. Now I know that Henry- quite rightly IMHO does not go in for themes but if I was to be a bit harsh this issue has a theme and that is "In Jokes"
Let me explain.
Star feature is the Editors own piece on Fictional Wars and Fictional countries and yes it is very well done with some lovely maps outlining the basis for his own Fictional world and the recent gaming weekend in Yorkshire(another fictional place???)  Now  if that is your thing then you have a splendid bit of reading but unless you understand the"world" then the whole thing is going to leave you a bit flat- you won't get the jokes- why does this unit have a beetroot on its colours pray tell?. For aficionados of this kind of thing this is a cracker - but for the rest of us? Fictional world and coutries are only really meaningful to those involved.
Next in the InJokes league is a scenario for the new Airfix WW2 game by Modiphius.. Now if you have the game and  know how to play this would be a useful  few pages but if you don't it is a waste of space I'm afraid - simply because it is all written in In game jargon. So you won't get the "jokes" here either Niether can you really convert the scenario to another system as not enough info is on offer. . Since I have no intention of buying into this "game" as I have at least 3 or 4 sets of WW2 rules already it was largely superfluous. Nice advert for the game though.
Other articles include the continuing series on the Great Patriotic War- thats WW2 eastern front to the rest of us again good stuff if that's your thing- its not mine but it IS beginning to pique my interest.
Making palm tree- never an easy thing to do -  but I have mine now  but this is still useful stuff . A pleasant article on Marlburians by  Paul Robinson- now I wouldn't call it the PERFECT period but there is no doubt that these lads certainly make it look dammed fine ! The mass effect of the game at Partizan looked good too. Nice one boys! -My personal favourites were the Savoyards - but then they were OG so I'm biased- but then I could re-start my own small Blue Moon collection... Maybe.
Mike Hobbs  Forwardv observer column cause me to laugh out loud- regarding the  "argument"  of what is fantasy and what is not- now my own line in the sand here is simple fictional coutries wherin the armies are also fictional along with uniforms and organisation are yes Fantasy. There is a huge difference between "could have happened" as in an Historical re-fight taking a different turn and  "Never could have happened" as in Imperial Romans taking on Aztec or Samurai or whatever.
To simply dismiss it all as "just playing games" is, once again to infantilise what we do. To trivialise all the years of work and research that plenty of blokes have put in over the year. This is not to say that ALL that we do should be deadly serious but niether should it be trivialised either.