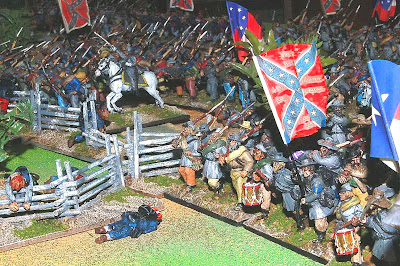 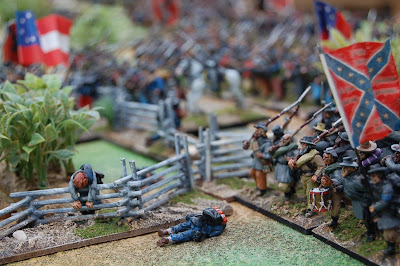 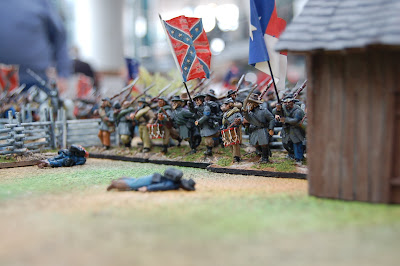 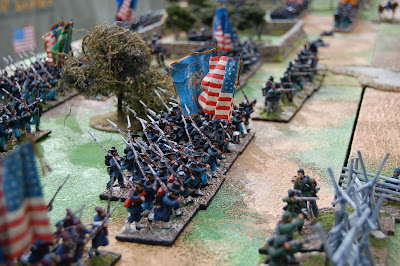 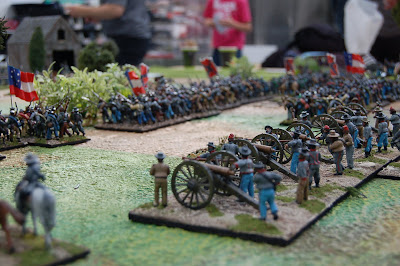 My thanks to James Douglas for supplying the photos as I'd forgotten my dammed camera !!
The figures are all Sash and Saber 40mm ACW mostly from the collection of Phil Freeman an avid 40mm gamer and Collector. about 20% of the figures were mine but almost all those in the pics are Phils For the actual gaming we use a somewhat modified version of Featherstones Horse and Musket rules- a bit more period detail was piles in- Rifles Muskets - 2 types Breechloaders and rifled artillery. Since I was working most of the time(you can't get thestaff ......) the gaming was done by Phil and Peter Sleigh . One of these days I'll get to play with my own toys.
Most of scenery was mine buildings either scratchbuilt or from the Sash and Saber range of scenics- which in the UK you get from yours Truly or in the US from Chris at Sash and Saber the Walls and some of the fences too. - Though some of the latter were Phils own. Table size was 10 feet by six and was a tad crowded- with 1000 plus figures on at once the game was a bloodbath - especially for the luckless Rebs who despite an artillery superiority were shot to bits in their assaults. It just wasn't Phils day. Nevertheless the game looked fantastic and was fun to watch- not a phrase I'll use often as I've never seen our hobby as a spectator sport.
As ever Derby was a great show- often overlooked I feel its been a favorite of mine for years. Roll on next Derby.
Andy
Posted by Big Andy at 03:50