Now you may have thought that after the first "Shinyloo" game earlier this year that  a  chap like me would move on to other projects - especially as I like to have  all my balls in he air at once !  But in this case no - not quite.  The possibilities for the idea are actually quite endless- shiny men or not. I've already mentioned moving the idea into the AWI and am now thinking about the Indian Mutiny. I am also considering moving into the 1809 campaign in Austria  Of course rules modifications for each period will be in order but not at the expense of breaking the simplicity of the basic rules- be they Charge or Featherstone. There simply is no need to get into the gamesey tripe  and modern obsession with "mechanisms" that infests so much of today's hobby at the expense of period knowledge and that always elusive but essential "period feel" .

This whole "retro-wargaming" thing is actually quite liberating. Not tying any given period to any given game makes life so much easier. I can look at actual history to discover what forces and troop types are available rather than follow the sometimes strange whims of some "games designer"  who of course has his own axe to grind- rather than mine . I can fictionalise where I wish - so the actual scenario may read like a historical novel  rather than a tallying of mere arithmetic as in a points system. But most of all I can throw the game designers spoon , which it often feels as if  he is trying to ram down my throat, out of my pram when and if I choose. The idea of "open the box(close the brain) and play" is simply not what this hobby is about and never has been as far as I am concerned. This is one of THE major reasons why our group prefers Umpire controlled scenario based games rather than "head to head lead" of the same old two player format I endured for the first 2 decades of my wargaming life.

So the actual pictures are all  from my 30mm "Shinyloo" collection - a sort of pastiche of and homage to the wargaming of the 1960s and 70s .  For those readers who have followed this project there are no surprises simply additions to the slowly growing forces. Now hopefully the next game in July will be another shinyloo encouter using Charge- that at least is the plan.

Those splendid chaps at La Flecha Negra in Madrid sent me these photos of their painting service. They tell me that all of these are Blue Moon 15mm - and I even recognise some of the figures. The cuirassiers from the ECW range and the ACW  artillery are pretty easy but I'm not 100% certain of the other 2  the French Guards are either from the Marlburian of the French Seven Years War ranges and the Spanish troops look as if they came from either the early Bicorne Napoleonic French or just possibly the AWI french. Never mind which they look really fine. Thanks for the photos chaps, 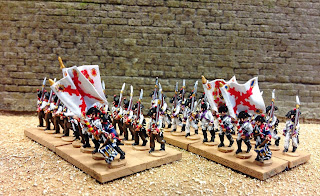 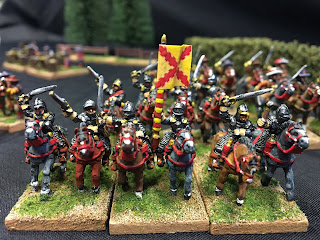 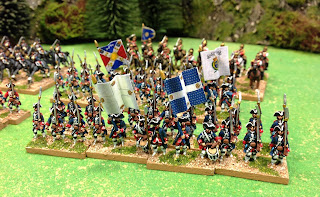 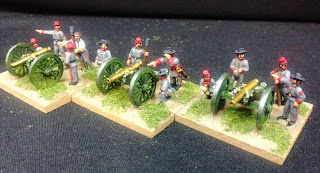 Our next show is Claymore in early August. This one is always worth a little of your time if you are withing travel range.. By then we should have had a significant re-supply from the USA (another 5000 or so packs of figures) so will be well stocked up with all show ranges,
As always the "6 for5" deal will be in operation and pre-orders are welcome. 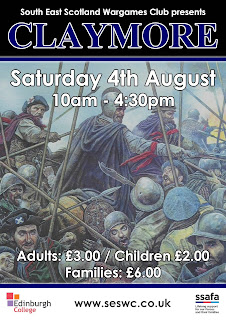 More Mutiny Men , a Shiny Lasalle and some short but pretty little dudes.

It has been a busy few weeks at OGUK so personal figure painting has gone slightly by the board.  Nevertheless a few half- finished items that have been on the painting table a good while have finally been finished. Firstly some Punjab Frontier Force- 2nd Punjab Infantry - that my mate Jim the Builder painted about 4 years ago that have languished in a box since then- saw the light of day and have has a bit of a touch up and a basing , They are the Sikh Infantry pack from the Old Glory Indian Mutiny range.  Secondly a model of Lasalle from the Old Glory Napoleonic personalities range -. Painted by David Wilson a long time ago and needing a good bit of TLC and a nice shiny coatto go with the "Shiny1809" project  which keeps gathering figures here and there.
The Indian mutiny forces are also growing slowly. Hope to get the first game in before the end of this year. As for rules I'm currently thinking either modified Charge or perhaps The Sword and the Flame

As for Lasalle - well he was just too pretty to ignore.and while "Shinyspern" or whatever is still a long way off- if you don't paint 'em them you don't get to  use 'em .
The only other chaps I've managed to paint were a few of the new Blue Moon 15mm Italian Wars range - which is selling fast- I'm already out of some codes which only arrived at the end of May. More are on order as you would expect but there could well be a bit of a wait for some replacements. But as usual we will get them out to you as soon as we have more. And yes I still have stock of most codes but at the rate they are shifting .....

Yes I was there. Wearing my T.W.A.T.S   hat rather than my Old Glory hat. This year I was a mere player on a splendid demo game devised by Andrew the Tekkie and Theatrical Steve.
Set in 1985 the Cold War had gone hot.  Warpact forces have crossed the inner German Border and have seized territory . However by Day 6 of the offensive they are beginning to run out of steam. Est German forces hold the town of Bratberg and have orders to deny the town and its Autobahn link to West German forces approaching at speed..
Jim the builder and I your gentle author command the forces of Freedom and Theatrical Steve and Mechanical Shaun those of the DDR . Andrew the tekkie is in the Umpire's chair and the table- 10 feet by 6  is laid out for a splendid encounter using Steve's excellent 20mm collection. For a chap used to 15mm these tanks are bloody Huge .

Now a short break to discuss a few other matters .... Doubtless chaps have notice our groups name. The Tantobie Warfare And Tactical Society.. Now as we were setting up some aged grey haired old bird stuck her oar in  to comment that it wasn't right as children might be present. Now as it happens we don't put up a banner or anything to  refer to the group by name so she must have read this blog or perhaps my  facebook announcement- she was part of a trade stand selling not much at all as far as I could see- still what is had to do with her is anyones guess. Nevertheless  ignoring her "New Puritan" stance we continued to set up, my only remark- in a loud "stage whisper" being "Don't forget lads, tleave the end 2 feet of the table clear- I need somewhere to put my beer and Fags !"  Well if you don't like it, tough. I do not and will not indulge in my hobby only for the edification of someone else's possibly present brats- especially if they are not there. Equally I do not go out of my way to offend either BUT I will not be browbeaten by narrow minded old  birds who should  mind their own bloody business. Even if as is likely in this instance they are younger than I. Since when pray tell has our many faceted hobby been all about children.

Moving on to the show. It felt a little less busy than last year- but I was told that the gate was exactly the same  but contrariwise it did not die as early as previously so may be the flow was better. Certainly there were more games as trader numbers were down by at least 3 on previous years. As regards the trade  Irregular, Colonel Bills  and Hoka Hey Wargames catered more or less for wargamers the rest seemed to be boardgames or fantasy dudes with the exception of Worley Books- who as usual saw some of my money. I did see some rather splendid SCI-Fi figures available and some lovely Conan style fantasy Barbarians - but the Prices Jeez! and I think they were resin too- so a tad fragile to boot. . At £2.50 (foot) each a Barbarian Horde is out of the question- tempted though I was for at least 3 seconds.

As for the game- well the forces of Freedom won- our plan was a fient on the left - with air support then a massive punch on the right and it worked(shocked surprise may also have occoured)  but it was a damned near run thing  and for once the odious cubes were not always so odious- though they did their share. Once or twice they were even kind as when Roland shot a Hind out of the sky .. A full battle report will appear on Andrew the Tekkies blog Tantobie Internet Tattler- which initials doubtless aforementioned Grandmama would not wish to sully here eyes with. We are thankful for small mercies.
The Resistance Lives ON.

As usual at this show the conversations with fellow enthusiasts were many and varied. There was a good bit of interest in Steve's wonderful collection of 20mm models. Andrew runs a  good  modern game and he and Steve know their stuff. A good yime had by all - despite the Puritans.
Next year it will be back to horses and muskets for this event- assuming we are invited- plans are already afoot.