Back to the Thin Lead Line.

It is going to take a while to get over the current and continuing  political/ financial turmoil but I suppose we have to start somewhere. Picking up the pieces I mean
Now as it happens I've received a list of up and coming new packs from Blue Moon which I expect to have in August- hopefully in time for Claymore but certainly in time for Partizan
this lot reads so far as follows.

Prices will of course depend to an extent upon the exchange rate and the bank rate. Prices may have to go up a quid a bag  across the board for the larger packs perhaps 50p for the smaller ones. As always I'll keep price rises to a minimum - and avoid them if I can.

The following day
I've also received a largish list of new Vehicles for Command Decision  bot WW2 and Modern
Much of the WW2 are Russian but the list(Various BT type tanks and variants) also includes a good number of US vehicles such as the locust light tank..
The modern vehicles are  US models- such as M-60  but also include M-109 SPG variants.
In total there are 38 new packs of tanks .
Posted by Big Andy at 05:48 No comments:

The wine has been drawn and now must be drunk. We are where we are- for good or evil.#

Frankly I'm not happy. OK we've a few years before the major ramifications of the out  become apparent- though the immediate one of the pound falling through the floor is enough to be going on with.
I voted to remain for the following reasons
1/. Stability- in a world that is in thrall to the "markets"   like it or not(and I don't) stability is EVERYTHING. It is not nice but its the truth.
2/. None of the emotional outie arguments convinced me and some of them were downright nasty. UKIP are a bunch of almost fascists I was sickened by that awful poster. I would not want to be associated -even by implication- with a bunch who could come up with that.
3/. Though the remain campaign was only marginally better of itself I refer  you to clause 1 above.
4/. The ramifications of an out vote were simply awful- break up of the UK being only the most obvious. Why would you choose  to make you life harder.
5/. I export to the EU and can remember doing it before the single market- when the parperwork was onerous and time consuming- now it isn't but it may be again  or may not we don't know.
6/. The outies had no plan. With the possible exception of Michael Gove they were and are a bunch of amoral opportunists. Boris for PM Gawd 'elp us.
Now I'm aware that there were plenty of  reasonable people who voted out BUT and its  big but  that is not how the campaign played out. ALL of the various Vox Pops on the many news bulletins   showed that the "outie in the street" so to speak was ONLY concerned about immigration. This ranged from genuine worry to plenty of knee jerk bigotry and attitudes I hoped had died last century.
Without suggesting that all the outies are bigots it WAS the bigot vote that swung it.
These same bigots are now smug and even more unpleasant(Farage again)
7/. The issue if Sovereignty in today's global world is just eyewash- a non -issue for little Englanders to get steamed about when reading their Daily Mail. Why- I refer you to point 1. The Markets rule

However were are where we are and must live with this. I'd be happier if the outies had had a plan before they got us where we are now.

A deliberately daft title for what is basically just a note to show off some more new Drabant 28mm figures These are of course Alans. Another of the Steppe peoples  of the Early Medieval period.
Dammed nice models these. 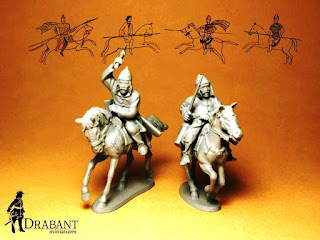 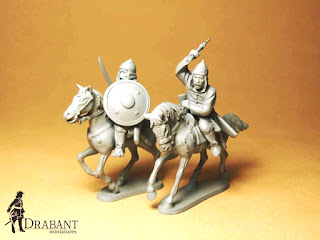 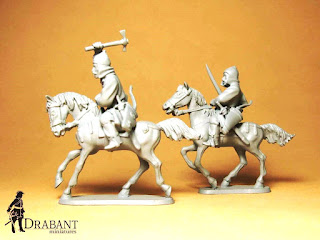 As you can see these are well up to the standard.. I'll have these as soon as my next- re-suply from Russia arrives.

Here are a couple of photos of Drabant's latest releases which I'll be adding to the website as soon as I get stock.
These are Cumans and are well up to the standard we have come to expect from Drabant. 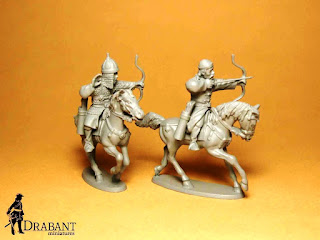 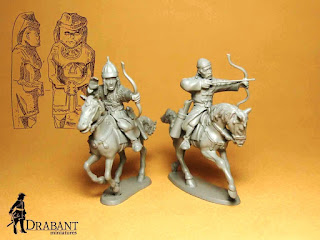 PS. I've just been informed that some Alans are also on the sculpting table. Needless to say Photos when I have them and stock in hand as soon as I can get them . I'm currently awaiting a re-supply from Russia which , hopefully will contain these goodies as well as re- stock of  much of the rest of the Dark Ages range . I'm pretty low on these currently as they have been moving just a tad ....

A Morning of Murderous Mutual Mayhem and Massacre.

Jim was about half an hour late picking Andrew and I up to go to the Durham show- where we and the resat of the TWATS were doing a demo game.  With much of central Durham  covered by roadworks and temporary traffic lights -this could have been a problem. In the event it wasn't - much-  and we were still able to set up easily. 10mm armies don't weight much !  Even over 2000 figures.don't weight much.
Scenario and strengths were the same as the previous post as Jim had not had the time to finish the additions as he- like most of our group -works for a living.
However the playing area was a good bit larger- 10 feet by six as compared to the 8 feet by 5 of the last game..
Player were- as previously Andrew and I for the Prussians but Mechanical Shaun had bee replaced by Theatrical Steve on the Austrian team- A late substitution cased by Shaun not being able to get in until after midday.
So immediately things changed. Would Floating Jeff's uncanny ability to roll 6s just when needed be offset by Steves equaly uncanny ability to roll 1s when not needed......

This was a very different game from our previos outing for Honours of War.
The Austrain sat upon the defensive but deployed ignoring the hill on their flank other than to use it as an anchor.


As previously the Prussians had 5 brigades(4 foot 1 horse) as against the 4 brigades- 2 of each including a HUGE 5 battalion brigade of foot which alone  contained almost 400 figures. Prussian brigades were 4 battalion(except 1 of 3) averaging 240 figures each.
The Prussian got of to an -intentional - slow start  advancing  in line of Brigades except for the smallest brigade on the extremeleft who occupied the hill. However the Austrian nailed themselves down so we had to go and get them.
First clash was on the right where our single cavalry brigade(2 Cuirassier 2 Dragoons 1 hussar) closed with the Austrian cuirassier Brigade of 4 regiments and mutual massacre ensued, By the end of the series of charges and counter charges both brigades were finished despite Jeff rolling his customary 6s

In the centre more mutual massacre ensued albeit at a slower rate- though not much slower-by the end of the carnage  no one had any usable units left- the second Austrian cavalry brigade immolated itself on the Prussian infantry BUT  did enough damage to force that brigade below 50% effective and therefore out of the battle..
Next left brigades also destroyed each other and on the Prussian left the Austrian big brigade  saw off our brigade facing them BUT  despite holding on by their fingernails our small reserve brigade- still fresh- had flank marched aroud the rear of the "Austrian hill" and appeared behind the Austrian lines prepared to deliver a volley into the rear of that brigade.  This was enough to finish them off. So - if victor there was- it was a single 3 battalion Prussian Brigade
In the meantime 2 small battalions of Russian had appeared but nobody had any troops to fight them. At least not for several turns so the Umpire declared "game over"
If Prussia had won it was singularly unsatisfying.
We found HoW in its second out extremely bloody- the game -even with all those troops was over by 1.30 - not having got started until after 10 in the morning. If getting a conclusion is you major reason for playing then these are fine. But if that is so then why start in the first place?. . Artillery can be deadly and armies on the defensive seem to have a singular advantage. There was much "all or nothing" here . Units  either function or do not and standing still to rally simply gets you dead   .
Generals seem to have little to do other than influence movement- but then maybe I'm missing something here.
I don't think- so far- that we have tested these rules to destruction but I'm not convinced either. I don't see how for example you could reproduce the British assault at Fontenoy- no battalion would last long enough to get within the  80 paces the Brits did before they opened fire.  Equally though somewhat out of period  I doubt Salamander Cutts would have made it to Blenhiem.
Both sides lost over 50% of their troops- even if we assume that those battalion not actually destroyed made it off table.
Indeed at one point Mechanical Shaun observed that
"These rules seem to work well if you don't move or fire! "
Now I wouldn't go that far - they certainly will do the deed for larger games with a little tweaking. How 18th century they are will depend upon the players. They are far too dice controlled for my taste- too much luck is needed for even a hope of success and they are far far too bloody. Certainly they give a good GAME  but for those wanting a little more than that I remain to be convinced as does Jim.


As to the rest of the show  it is small but  nicely formed about a dozen traders  a decent cafe and a relaxed atmosphere. I picked up some guns from Eagle figures- these are large enough to go with my 30mm Stadden crew and are nice chunky pieces without being overdone.
Whilst wandering about came across- in one of the side rooms - a little boutique called Attic which was nothing whatsoever to do with wargaming at all. Therein lay its strength.
Now my wife is into retro jewellery and clothing so this little place sparked my interest.  After a conversation with its very pleasant lady owner I bought a splendid silk scarf for my wife Carole.
This certainly helped to lighten the mood away from the  by now repetitive mutual slaughter. Man shall not live by wargaming alone.
Posted by Big Andy at 02:16 10 comments: