While I was at Partizan it came up in  a conversation  about my book- 'Their Infantry and Guns Will Astonish You that there aren't any ranges  available to wargame the campaigns out lined in the book.  Well that is both true and false.

True there aren't any dedicated  RANGES for these fascinating campaigns. FALSE because there are plenty of figures out there if you look about yourself and stop being a lazy chap expecting to be spoonfed. After all building such an unusual army is part of the fun of this hobby.

The first place to look of course is any 'Wellington in India ' range, which of course you will understand when you have read the book.

Foundry and Empress also do plenty of useful models  for the Mughals and other more irregular troops. Empress also have some useful  carts waggons and baggage items geared to Indian armies.

Old Glory do plenty of the irregular types  hidden in the Sikh Wars and Indian mutiny ranges - some of their Pathans are doing duty as Rohillas in my slowly growing collection. .

If you can source them Indus miniatures do some useful figures but beware some are, rather oddly, left handed.

Perry have a few Bombay sepoys hidden in their British Napoleonic and their plastic Afghans are a useful source of spares parts for conversions - as are the Wargames Atlantic plastics.

Eureka in Australia have some very useful 28mm in their Golconda range  but they seem to be a little difficult to source.

I have seen some rather tasty 20mm/1/72 scale models from Schilling Miniaturen - a German company  worth a look  certainly  as they are very sweet indeed.

In 15mm Minifigs do a Wellington in India range - never seen them in the flesh but the pictures look OK. Freikorps 15 used to have a warfare in India range but no longer sure who owns these now.

In the tiny sizes Irregular do some useful stuff in 6mm .

So building armies for these campaigns is very possible with just a modicum of effort.

Once you have the armies then you can think about rules.... More on this when I have had a little think ....

I've been up to my armpits in India recently - well as far as figure painting goes anyway  so I feel as if I have rather neglected 'shinyloo' and indeed other retro-wargaming projects.. I've done the odd figure or two but no new actual finished units. But I simply can't leave the shiny dudes alone !

When I look at my 'shiny' collection it covers three periods

ECW which is probably the largest of the three and  is still - very slowly- growing or at least is intended to grow as I have some Hinchliffe cavalry  to finish as well as about a regiments worth of foot- some to be added to units I received in the big bundle of shiny ECW my wife bought me for Crimbo some years ago and to which I have added quite a few bits to since, more cavalry for both sides mostly . Still some reconditioning to do  and 'painting in the style of'  to finish units. About 500 figures and far far too many guns.

Napoleonic. Shinyloo' of course which is mostly a 30mm collection  and has posts of its own. Still being added to. At some point in the future I would love to do a 'shiny-demo' at a show . A pastiche of wargaming in the 1970s .... wonder if I still have a kipper tie ! This collection is now knocking on the door of about 350 finished figures and still growing Loads more to do at least 3 and a bit shoeboxes full oh and a veggie box full of limbers and guns and well ; stuff. ..

I also have some more modern Napoleonics - Old Glory of course  for 'shinynine' an 1809 project in the same vein as 'shinyloo' , This hasn't really got off the ground yet as I have only done a few French and Bavarians and a single Austrian Uhlan unit.

Finally 'shinyrev' The AWI in 30mm using mostly Stadden models with a few Willies. Still less than 100 models rebased and shined up  but more to do. including a good number that  are already painted, some by Dave Jarvis when he was much younger than he is now ! Most need a bit of TLC and rebasing as they fought through the 80s and 90s and even into this century and nice new shiny coats. These were the first 30mm I ever bought back in the 80s. I've added numbers since . I've 2 shoeboxes full of unpainted castings

Oh ... and just to be clear I have plenty of armies that are not shiny. Shiny does not suit everything.

So here is the first battalion of the First Brigade of the Army of Hindustan in about 1792 or thereabouts.

Models are First Corps with Old Glory AWI command  with some head swaps. The gun is an old Minifigs 30mm piece - which they probably won't keep.. Each battalion will have its own 'gun company' as in the original. So each model battalion of 24-30 figures will have in addition a gun and grew representing the 4 guns and a howitzer of the prototype.

By 1803 there were 5 'brigades' in this army each of 10 battalions, more or less plus  cavalry  backed by hoards of not always useless irregulars horse and foot. In addition there were other 'trained brigades'  who would also fight the British and  give Wellington the fight of his life at Assaye..

The British- with more than a touch of paranoia often  called the recruiting grounds of this army in Northern India 'The French State' - which it wasn't but Boney did attempt contact with Pierre Cuiilir Perron the French Officer who succeeded De Boigne in command of the Army.

The period  fascinates and there are some decent books on the subject - by Helion naturally,

Josh Provan's excellent 'Bullocks, Grain and Good Madeira' gives a fine account of the Second Maratha War from the British perspective with plenty of info on the battles and a lot of fine stuff on the difficulty of supply . I heartily recommend this book.

As for the other side a little toot on my own trumpet here as my own study of the Maratha forces 'Their Infantry and Guns Will Astonish You' is also published by Helion. This covers in detail the formation of the Maratha regular forces which would oppose Wellesley at Assaye and give His Noseship  some tough memories of battle for the rest of his remarkable career.

Napoleonics in strange parts of the world ....

Catching up on my Reading -12 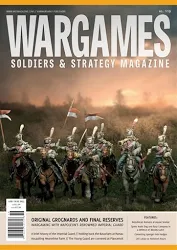 I have not reviewed any magazines for a couple of years. That is mostly because I don't see that many these days but also because those I do see often have so little content once you get past the sometimes useful  product reviews.

So it was with no little pleasure that I discovered WSS no 119 actually had something to read in it once I got past the useful product reviews.

The featured subject this issue is Napoleon's Imperial Guard and the mag has 6 articles which feature various aspects of the Guard . These 6 include 3 scenarios for Napoleonic games none of which patronise me or treat me as if I was 14, this in itself is a major plus point as frankly I get seriously tired of magazine articles that assume I need fingers for the long words. The article on the Battle of Hanau was particularly interesting - an excuse to use Bavarians in an historical context.

Other articles include one on early Tudor armies US Paras in Normandy and a nice  one on the Welsh Marcher Lords - actually Normans of course with a scenario for fighting the Welsh..

All of these articles had a little historical intro to set to scene and introduce a little context  before getting into the scenario - if one was included  which for the 'how to' on the Tudors it was not.

As usual the mag is filled with eye candy - all in the 'received style' but mostly none the worse for that though perhaps  some different styles of modelling and painting could be included once in a while - mind you the tiny 2mm(?) Romans and Germans were certainly different. Still it would be nice to see some 15mm , other than tanks, once in a while.

Rick Priestley's 'This Gaming life' column  definitely struck a chord - much of its purport was on the use of Umpires - which is something I have been in favour of  since at least the 1990s- all the games featured on this blog are Umpire controlled and I wrote and article on Umpiring for MW several years ago now. Nevertheless  it is nice to see someone else advocating a similar set of methods.

If I had a complaint it would be that on the whole the articles were on the short side - but then that seems to be the prevailing fashion these days. Some seem to find more that a couple of thousand words too much for the brain.

Still a fine mag indeed. Best mag I have seen for some months. . Recommended