Crossing to the shiny side.

Now in the past while I've admired the "toy soldier" stly I've never quite taken the plunge. For my money its a very particular style and I've never quite found the sort of thing I want. I've dabbled off and on and have a small collection of 54mm Medievals for the Hundred years war- comes of admiring those Courtenay and Ping figures I can't afford- and I fiddled about with some Irregular mins 42mm 7YW all to ultimately noavail- they left something to be desired. However some time ago I was re-reading H.G .Wells and thought why not do it sort of as Wells did so the idea of having a collection of late 19th century shiny toys took hold. Not I thought 54mm - too big and I'm not shooting cannon at 'em . As usual I don't think about rules until I've actually got some toys but it seems that Featherstone would suit - all simple and in keeping with the times thinks I. So with that I had a man or two sculpted and got 'em into a mould. I've now painted the first 5 as in the picture. with another group- this time Grenadier Guards on the way. The "enemy" will be Germanic basically FPW prussians once I get those made. As for commercial availability that will depend if anyone else fancies any. I also have a few Indian army on the go but they won't be ready for a while simply because there is too much to do in "Work" mode to give a lot of time to all the stuff I want to do.
As for work I'm hoping to have a fair bundle of new stuff out in the next few weeks. 15mm Moderns will get the 105mm light gun with ewither US Marine or British Crew New Aircraft will include a bloody lovely B-17 and some German Jets and more Jacdaw stuff is on its way. I'll also be getting a bundle of the Bluemoon 15mm WW1and Old West Ranges- in time for Salute God willingand the rest of the new BM stuff as I can and assuming customer intrest warrants.
Posted by Big Andy at 07:34 3 comments: 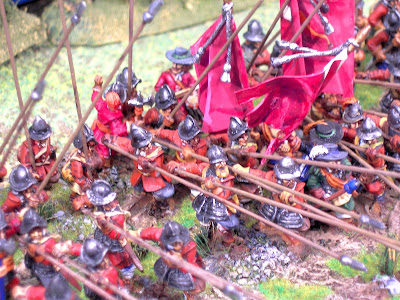 Now when it comes to basing most of my collection I'm pretty picky. I do use painting services - mostly for display units in the line of business as it were but also sometimes for my personal stuff. However I do have 1 rules I always base the stuff myself. The reasoning is simple even when I use different painters whose styles may differ slightly making the bases match through out the army gives homogeneity to the collection- looks better on the table too.
Bases have several functions of which the most important is protecting the model- then perhaps running a good second is the bases function in the game as a way of sspacing the unit . All my figures get based even those that remain singles though this may change in respect of one collection assuming the project comes off as I hope- under most circumstances the base is an integral part of the model . This is certainly so in the case of my modelof Denzil Holles Regiment of Foot for my ECW armies. The bases of the front section of the unit were deliberately made 3 inches loner to accomodate "Charge your pike" figures as the idea was to model the unit under some pressure from an enemy. Obviously the rest of the bases had to matchand I laid the odd stiff out there on the base fronts for added interest .The whole unit is 44cm wide almost 18 inches so the players need to watch the flanks- just like real generals.
Posted by Big Andy at 05:22 4 comments: