I seem to have started a tiny furore !!!

Oh dearie dearie me  don't some chaps really hate laughing !
My article in MW seems to have started a (very small) fire- which was perhaps its point as always better dead than bland  Oscar Wilde was right ...
Now I've only seen one of the supposed discussions - the TMP one
http://theminiaturespage.com/boards/msg.mv?id=351083

there but I'm told there  is at least one other but I don't have access .
As it happens TMP is the only forum I can be bothered to visit and evn that not too often the others I have dipped in the past are not for me - usually too much fantasy at high volume - metphorically speaking -  and even more spats and rows than PMT often for less reason.. I was told by omne of that ilk  that the kind of anonymous nastiness I encounted  on a couple of these fora in the past was "socialising" - but of course none of the spineless nasty whiners there had the balls to "socialise" to my face they had to keep thier nastiness anonymous and  underhand as they thought it clever ... so that explains my prejudice against some of the forums out there.

Now the current discussion isn't like that at all  heated yes at times somewhat misdirected - certainly amusing yes  pointless- well rather as one thing I've learned over the years is that its impossible to  use mere facts to outshine prejudice or  personal interest.
However I'll say this until I'm blue in the face and have it put upon my bloody headstone in letters of fire.


Having  actual knowledge is NEVER a bad idea.

Those who - for whatever reason- in our hobby usually financial - try to restrict and own  such knowledge can
"garn ferk theresels"
and that goes for you wargamer or more especially not ...

The Resistance Lives On

Now as it happens I  perpetrated the offending  article for several reason- Like Lord Reith to Infom to Educate and to Entertain  but not in any particlarly Reithian order but also to stir the mud at the bottom of our pond- to make chaps think about what we do and also just for the fun of it  after all not all of us think like accountants or office supplies executives or systems administators(and no I still don't know what one of those actually DOES) some of us like a bit of intellectual argy- bargy- it keeps the braincells in order. as of course hopefully out of debate and discussion will come new ideas ..... hopefully . .
Believe it or not thinking is important even in our little world . and there used to be a lot of it about- much more than there is now . Okay some it of got silly- Anyone remember the "Great Rhomphia debate" or the "National Characteristic" furore over Bruce Quarries Airfix Napoleonic  rules? but surely better than than the bland exceptance of the  "Games designer dudes"  inflicting their views on us without our comment. for their profit..
I did get more than  a bit narked by a dude  who opined with one breath that having books and knowledge was elitist and the  told us in the next that HE had 2 degrees  Hmmmmm???
Equally the same dude thinks its OK for chaps on a limited income to buy rulebooks at £30 quid a pop but not OK for them to buy half a dozen books at a fiver each - Sod that ! now I'm not exactly skint (or flush either mind) but I'd rather have half a dozen useful books than one overpriced over glossy  overproduced rulebook any day of the week
Equally  I was just a smidgin peeved with another chap who  said I should  not have refered to dude 1 as a patronising pillock- well maybe pillock was a bit harsh  so I apologised- needless to say this passed without remark by siad chap as did Dude one using similar terms(minus the pillock) toward me- double standard anyone- no thanks already got one.
Now the reason I'm carrying one here rather than there is simply one of convenience- I can go off and do a bit of work  whilst thinking about what to scribble next and blogger will save this for me  whilst TMP doesn't - or at lest I can't make it so .....
However having had a  right moan there were several useful posts a couple of which stated  more clearly than I the postion  I and they were in favour of so by no means a complete waste of time overall - there ARE thinking chaps out there.

But somehow there simply isn't as much ... well flavour in it as there used to be. It all seems at times to be decending into games for children  usually unpleasant adolescent boys  but then thats the GW influence... apparently readin' is borin' if there no blood .. or torture or cannibalism...
Nothing stays the same but does the  intellectual spiral always have to be downwards ?

I've written 2 posts since this including one on Wargaming tedium and frankly I'm still at a loss as to why some chaps do this - after all  it can't all be about childrens games can it ? I've evn re- read my MW piece trying to grasp why some  self oncessed ninny on PMT called it "angry" - possibly because he didn't read past Henry's introduction. I'm not sure how something can be called "angry" when it argues a case - presenting evidence and alternatives for a little adult method and at no time do I opine that this is the only way to do stuff indeed  pointing out the difficulties of my method where I can .
I know I shouldn't let these tossers get to me but  what is actually wrong wioth using your brain for a hobby that is suppoed to interst you .

Another Smorgasbord.... Tanks and Stuff ...

Found some rather battered 15mm  T-55 's in a box a while back  that Jim had painted in green . They'd had a hard life and needed a good tarting up . So checking out the relevant Osprey on modelling the T54 /55  I found a section on making a Northern Alliance T-55  for the Afghanistan War of the 1980s,
This will do thinks I for another bit of a parody
Now I'd wanted to add some armour to my "second line" troops in the on off "Harraq"  series of games- read Iraq of course so  with the current contretemps in that unfortunate country the "72 Virgins Martyrs Brigade" have now become members of IZAl.The Islamist Zealots Alliance.
Why IZAl  well chaps of a certain age may remember a medicated toilet paper of incredible hardness... of the same name ... Seemed obvious to me.
So these tanks were painted to look pretty nondescript and frankly a bit worn out and hard used and will be joining the "72 Virgins Martyrs Brigade" (read ISIS)  in our next game set in this period along with other stuff on the  painting table at the moment.

Also  newly photographed are some OOP Drabant figures- these have had their pictures taken before but not like this- again a couple needed repairing - bayonets cone and sundry chippings from the time they were in the show display case.
And finally  a pic which recently appeared in MW  with an article of mine
and put here simply because I like them.
Posted by Big Andy at 05:14 No comments:

A Rose by any other name.

As you know Gentle reader I'm a fan of Drabant Miniatures. Their 40mm are the Dogs wossnames and increasingly so is the growing 28mm Dark Ages Range- for which more figures are due this coming Autumn. More Norman Knights and some crossbowmwn so I'm told- can't wait.
So whern fellow enthusiast Ian Martin sent me some pics of his Vikings- painted by Jez at Shakespear studios  I thouight I'd get them up for other to see. Then as I'm thinking bout this Lo nad Behold Nick Biuxey of the "Like A Stomewall Group sent me a bunch  of pics of Dale  Askews  recently painted Normans from the same range- pinted by Dale . It therefore seemed a bit of a No- brainer really to put both sets of pics together so that readers can get a good look at these speldid figureswithout me telling you how tasty they are- let other chaps do that for me. 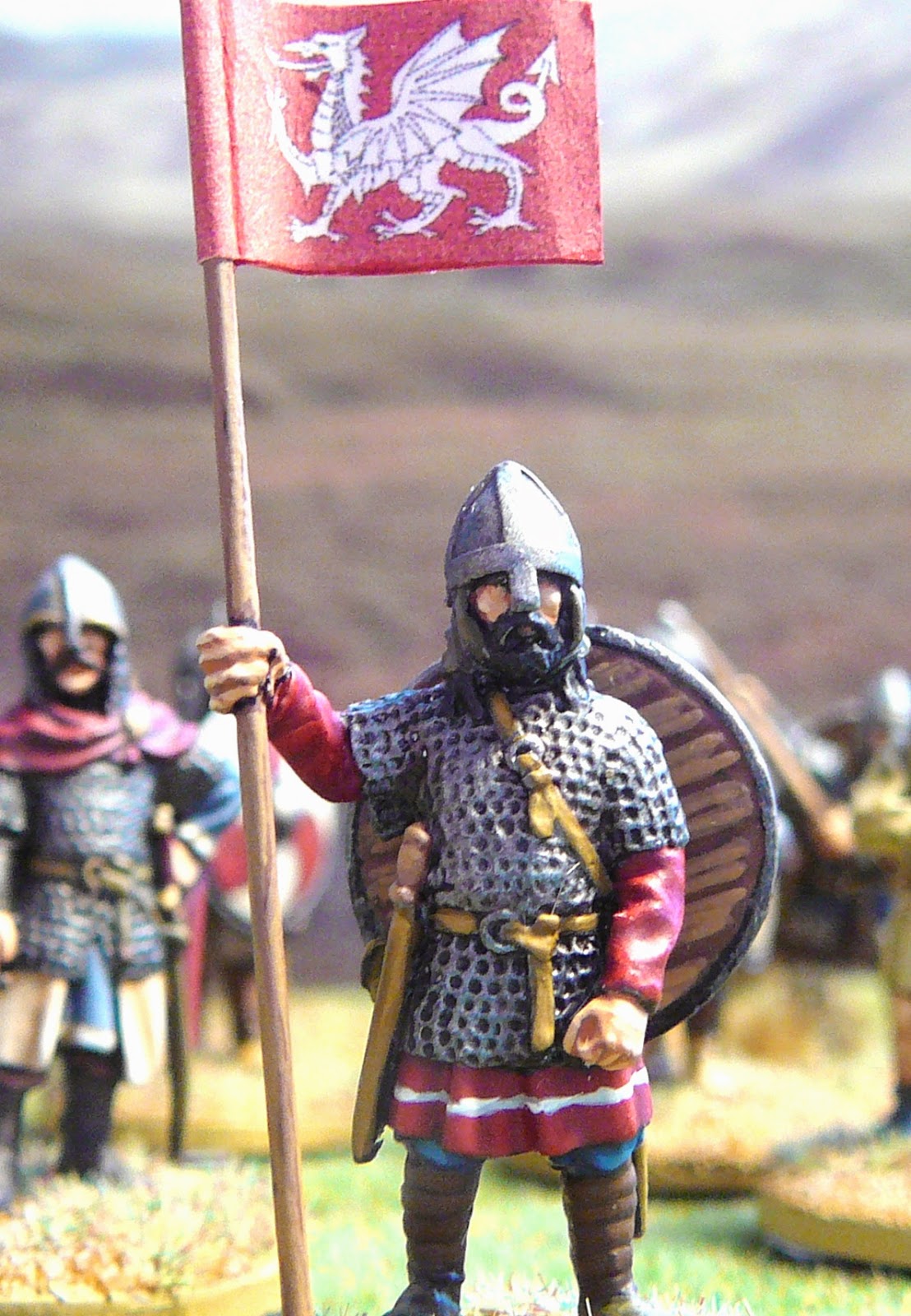 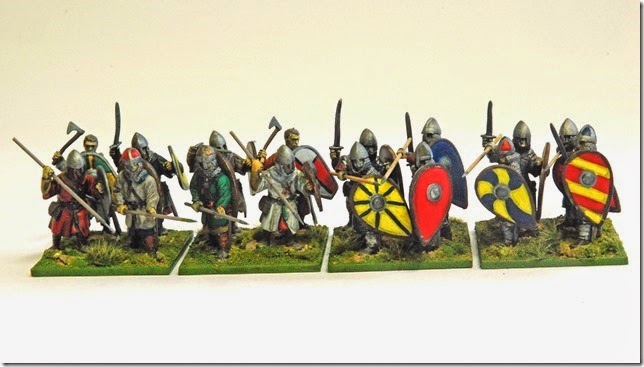 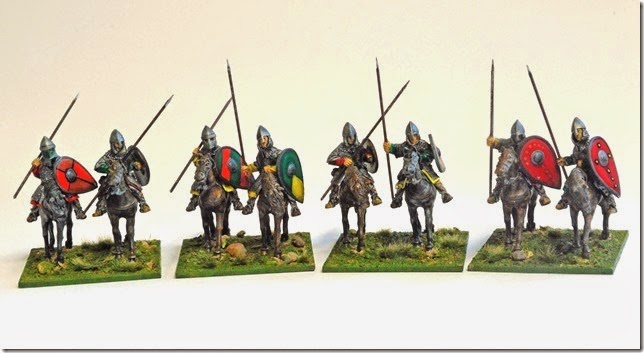 Photographs used by the kind permission of the owners of the figures.
Posted by Big Andy at 05:19 3 comments:

Had a nice parcel yesterday from Pete the Sculpt. Thext 12 new figures in the growing  Fireforce Miniatures 15mm figure ranges.  All for post WW2 conflicts these are
a/.FFM3 Rhodesian Troopies Command.
4 poses
Officer/NCO
Radio
Mortarman with mortar
RPG man
Now in theory the Rhodesians used the 3.5inch "Bazooka" but all the photos I've seen  show RPGs as the captured so many of them that they had more than they did bazookas so it seemed obvious

Dress is the usual mixture but with the cap more in evidence than in the 2 already released troopies packs likewise long trousers rather than just nutcracker shorts- both were worn .
b/. FFA6 Argentinian Special Forces.
4 poses- all armed with Sterling Pratchett SMG
Pete has put plenty of action into these little Dudes. 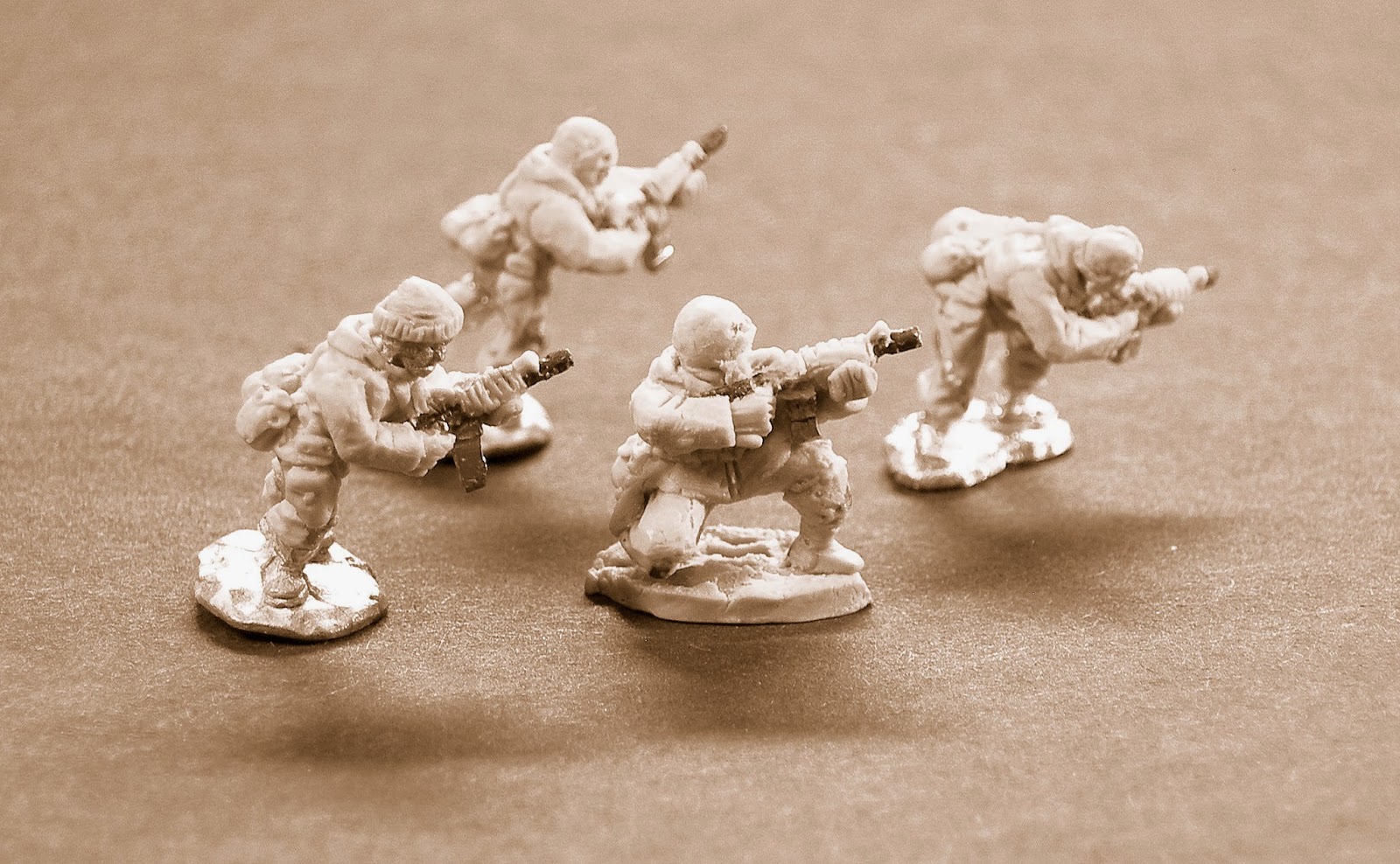 Packs in all the above cases will be 12 figures- 3 of each pose. These- along with afore mentioned Hawkwer Hunter and the  re-moulded Alouette 3 Helicopter should be out in time for Claymore .
Hopefully I'll also have  the 3 Scorpion/Scimitar/Sabre models that went to the mouldmakers in the USA 3 months ago....
Posted by Big Andy at 04:36 1 comment: