By Gum!! Two posts in One day. well sort of. I've been trying to find the time to do a "proper" post for the last week or so but what with work and the rugger and one or two other things it just never happened.. Noiw some of you dear gentle readers , will be aware of my views on the" figure fascists" , those narrow worthies who have all their little men fr in one style from one maker and who opine loudly that all others are beneath contemp- usually if they haven't been sculpted by the 3 armed hydra. Now this is not about figure quality- well not really- but more in a way about the dead hand of conformity laying its cold and clammy fingers upon us however lightly. Why I ask myself in an age where there are more makers than ever are many armies less and less characterful . The same overpainted blandness trotted out over and over ? There may be more figures but there is a dammned sight less art. What I hear your cry Art?. Well yes in a very small way you understand. I'm not claiming I and my Ilk are akin to Michelangelo or Caravaggio- except(in younger days) for bar fights perhaps but good painting and modelling in our hobby is an art form albeit a very minor one. ( and you thought an Ilk was a funny animal that wanders aimlessly about the tundra.... well you may be right..) No what the dead hand of the FFs do is make it harder to do anything different 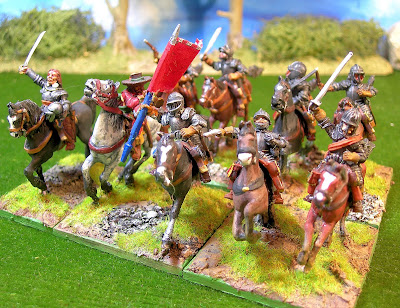 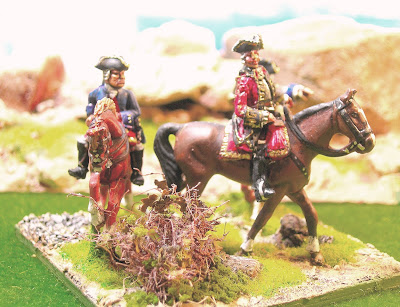 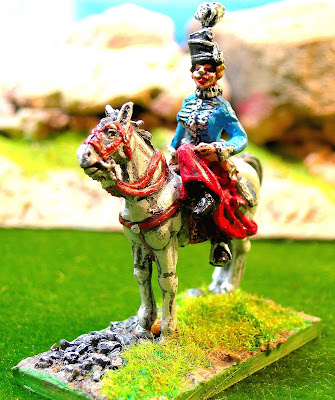 and no I'm not talking about warrior teddy bears or similar amusing silliness but about an attitude. An example , in the past Old Glory have been criticised- often quite brusquesly for using "different designers" well of course we did halfwits there was too much stuff for one bloke- unless he cloned himself and thats only been done once in this line of work-so we used different blokes for different jobs. We must have used 7 or 8 designers to date and I still use 4 - including David for Jacdaw. What that did was give us different styles for different tastes - how can that be wrong? However it was- apparently becasue it wasn't the same as the "designer minifigs" style prevelent both then and now(and no I'm not having a go at Minifigs they are fine for certain jobs). Now You also get all this sizist crap about "are yours 25mm or 28mm ". I covered this little gem in an article on the OGUK website so won't bore you with it again but its about presentation here. How you finish and present yoyr toys that is far more important than mere millimetres. So to somewaht "prove" my point- at least to myself here are a trio of pictures where mixed makers are used together. The ECW curassier unit are Old Glory figures on Jacdaw horsesand represent Colonel Balfours troop at Edgehill - one of 3 such troops in the Parliamentry army. The 18th cetury group is largely Old Glory but Soubise in the centre is a Willie figure on a Stadden Horse while the lady a la Hussard is a willie figure on an Old Glory Horse. To my mind all have more movement and style that repeated perryclones
Posted by Big Andy at 05:07 3 comments:

The weekend before Derby a few TWATS got together for an AWI game at our usual pub. Now I was in the chair as I planned to use British Grenadier however I didn't have a copy- I'd sold out so I thought I'd try Black Powder. Now mu=y earlier musing upon this ruleset in another place- wherein now I do not go- were mixed to say the least. This small game did nothing to change those views except perhaps for the worst. The Britsh force had 2 "brigades" with unit sizes rangeing from large to tiny 40 figs for a guards battalion and 5 for a light company of the 17th foot while the rebels had 3 brigades - 2 of militia and 1 of continentalsand out mumberd the brits about 3 to 2 . Add to that the defemsive position and the brits were on a sticky wicket but not by any means impossible. So to the game. We managed 3 turns - the turn and turn about system doubles the length if the game, the proprtions between the various ranges and movement are just twaddle the spatial relationships are just wrong for the AWI but far far far worse than all of the above is the simple fact that you can't find anything in the damned book.. There is no index. The contents page is only of marginal help and flicking hither and yon though all the " pretty little rich boys eye candy" to find a given page became a real chore. The patronizing tone was also a pain in the **** even when you found the bits you were looking for . It became obvious that BP is simply a pretty book for sale to the sycophants or the suckers with a few nice ideas hidden between the rich boys showing off pages. I do like the way you can personalise the units but set that agaist the set unit sizes - which I'd hate in any ruleset-and I like the idea of the order system- despoite its "poseurs charter" - which could be fun once or twice but could end up being deeply annoying at least to permanent TWATS. As an AWI set well no. But I still think they might work well 100 years later as a colonial set . I will have another go at 'em but not without a bit of serious butchering 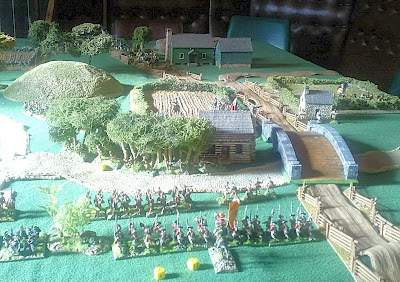 The above pic shows a general view of the battlefield - British in the Foreground. 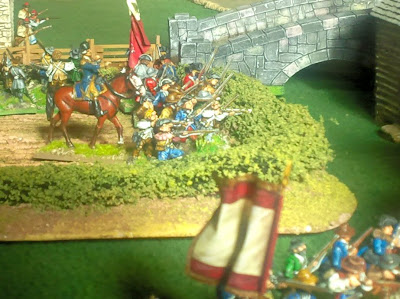 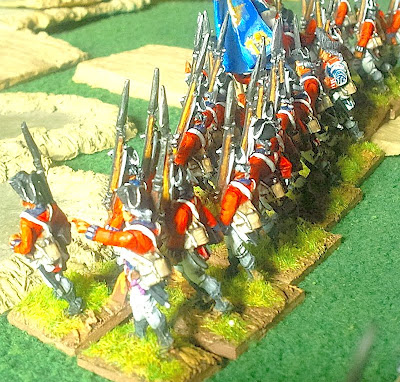 this pic shows the 1st foot.- Old Glory Second edition figures. The rest of the armies were a misture Old Glory - both standard and Second Edition ranges rubbed shoulders with Staddenand a very few Hincliffe X ranger- the Hezzlewood figs a lot like RSM. Its just a pity that the rules just didn't function. I've lent my copy to Andrew the Tekkie basically to see if its just me who thinks they are twaddle I await his " not quite a wargamer's " verdict. It will be interesting to see how he fairs finding his way around the tome. It drove him nuts on the day.
Posted by Big Andy at 03:30 No comments: