Here are some more pictures of Julian 's units that I though you might like to see. 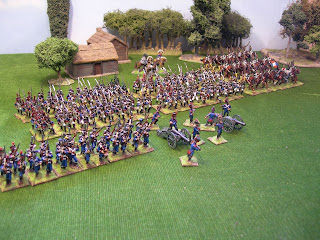 All of these pictures show Julians units to advantage. Frankly I'd be having the lot myself  if I hadn't already go a bundle of 40mm Napoleonics. I did think about it but no 1812 not really my thing, never has been- too much "War and Peace" in my youth. 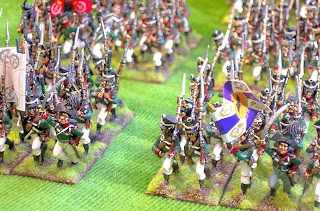 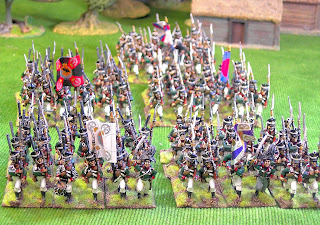 As I dig out the files I'll post more pics and close ups- Including my own Cahsseurs of the Guard and Boney and his chorts.  Keep watching....
Posted by Big Andy at 02:47 9 comments:

Spole to Terry the Mouldman in the USA on Thursday night. The 4 new 15mm Modernvehicles mentioned a few posts back are now in the mouldmaking process.
I'm hoping to have examples in time for the Border Reiver show but its just as likely to be a few days after depending upon how thisng go.
So FYI there will be 4 new vehicles
Toyota Hilux Crew cab

BSV 10 Viking
Supacat HMT400 Jackal
Supacat HMT600 Coyote
The viking especially will be a biggish kit- with 20 parts including the bar armour .

Once I have these models in hand I'll let you know.
Posted by Big Andy at 01:57 No comments: 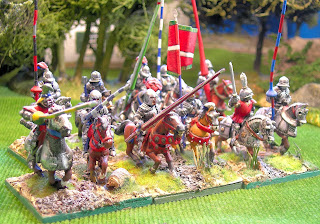 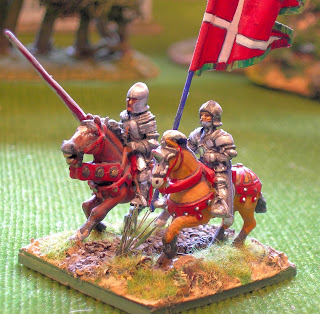 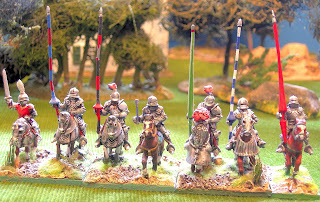 Sorting through my drawers- as you do- I found this unit of 15th Century Savoyard men at Arms. They are at least 15 years old possibly older- with 1 exception-  painted more recently but still of the same age.
Makers within the unit are many and varied. Grenadier, Foundry(only a horse or two) Metal Magic and redoubt-again only a horse and even Alternative Armies- horses again.
A right mixed bag but whemn put together the unit looks fine. Makes a lot of that"are they 25mm or 28mm look complete Twaddle doesn't it.

Culinary adventures of a Wargames Trader.


When I'm not working I do like to cook. I'm no galloping Gourmet (remember him?)  but I haven't killed anyone either but the point is I do take an interest in food.Which tends to mean I avoid Macdonalds/Burgerking/KFC like the plague- mostly because the s***e they sell tastes like it already has.that malady.
I'm not even completely convinced that pizza is actually food- unless I make it myself  or see it being made- not that I'm not fond of the occasional thin crust Italian type  or perhaps a decent Calzone but God rot all stuffed crusts( I know where I stuff them!) deep dish  pineapple encrusted monstrosities. King Ferdinand of Naples would spin in his Grave..
So Gentle reader you see the quandary I'm in  when I get to a show and feel a tad sharp set what are my choices- well often something that looks like a model of a land fill site- and tastes like it too or if you are lucky Bacon butties underfilled with underdone bacon as flaccid as a politicians backbone. Some of the most deeply disgusting food that I have ever forced down my unwilling gullett has been had at Wargames shows. In 21 years  and more of  going to such events  if anything the situation has got worse rather tyhan otherwise..
I can recall shows back in the day- usually of the smaller more intimate type where the food albeit simple was often home produced by the organisers- or more likely their WAGS ( or mums  possibly ) .At its best it was very good- sort of "Cricket Club Tea"  Gone are those heady days and even then they were the exception rather than the rule. Nevertheless some shows managed acceptable "Char and Wads" or edible Bacon Butties.
Over the years this has become less and less common. Food at shows even at its best is only adequate- you might get a respectable Bacon Buttie in a morning after the unload  but lunch is fraught with danger. In this respect Gordon Gecko was wrong. Lunch is often for the strong of stomach and the non-existant of tastebuds. Take a recent event. Morning Fine Bacon Buttie OK - fresh Roll Bacon a bit Flaccid but I've had much worse. Jim was a bit more scathing about his suasage buttie.
"Like 2 Durex filled with Pus"
Now aside from the fact that my coffie tasted like a liquid Brillo pad I survived "breakfast"
Lunch ... Ah yes Luncheon... what a delight awaited us....
I suspect it was Menued as "Pizza and Chips"  but mine looked like a Nuclear Fallout zone- still glowing bright orange and limp ..apparently it had needed a crew of two just to get it to the (paper)  plate. Having said that it wasn't the worst I've ever had- that prize goes to a show a few years back when the chips were so foul that I didn't notice I'd sugared rather than salted abd ate them anyway...
Some- but by no means all - venues charge outrageously for this simply because they have a captive audience. I've had burgers of an unsurpassing mankiness flat beer in plastic bottlesand dishes of  stuff that looked as if I'd already eaten it once- and this sort of stuff is not just a British problem.
Not that I expect anything to be done- I'm not even sure that anything can be done except either starve or take it like a man!!
But wouldn't it be nice if.....
Posted by Big Andy at 09:33 6 comments: