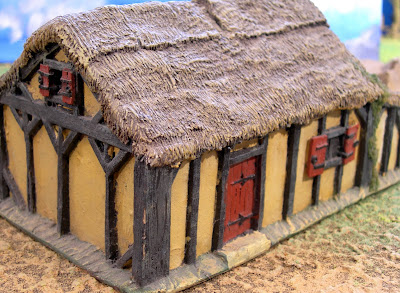 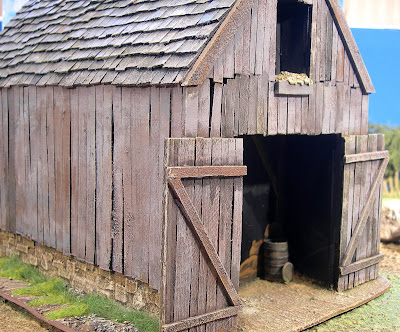 Now when it comes to scenery for the table I'm never too sure what I want- Mostly I want it to"look right" whatever that may mean. There is a lot of stuff out there in the marketplace that is just awful- badly thought out lumps of resin with little or no idea of scale or proportion. Horrible "lift off Roofs" for the cranially challenged who want to put their little men inside the little housey Oh dearie me... I've seen otherwise good looking games reduced to post tornado wildernesses by player simply leaving the roofs off so as you may gather I'm not a fan of the lift off roof. It has its place in skirmish games but at least make the roof bloody well fit properly instead of the clumsy lumps I so often see.
Make the building at least pay lip service to the architecture of the period and the location - these days that does most often get done but oddities still appear though not nealy as often as they used to.
For myself I often used to make my own buildings- its not hard laborious yes but not hard. The first picture is a25mm- approx 1/50th scale A frame cruck house for medieval and pike and shot set ups roughly 1300- 1700 and a bit after- deliberately English in style youcould squint a bit and use it on the continent.
Te second pic id a 40mm - 1/43rd ish American barn. I left the doors open for effect barrels and interior are eithr placed or painted on like a theatre set simply to add a bit of visual interest. .
Posted by Big Andy at 07:09 2 comments: