Surrounded by a load of Shine!

Its been a good while since I did a post about my "Shinyloo" project. Its been a while since I painted any . However I thought I'd see exactly what I had so  since I needed to do a photo shoot anyhow here are some shots of the current finished collection. Not large by any means but still growing a tiny bit at a time when I fancy painting a Stadden or a Minot - or even the odd Peter Gilder Foremost figure of which I've added a few to the unpainted pile..
So here are some pictures of the shiny dudes.

There are now about 70 or so figures painted with plenty more to do in between more"work- related" projects such as actually trying to undertand the jargon in a recntly aquired copy of Pike and Shotte- which looks very very pretty but I actually haven't found any rules yet but then I've only had the book for an hour.
More shinyloo soon- I've some Polish Lancers on the  painting table.
Posted by Big Andy at 04:36 9 comments:


There are lots of things about this hobby that leave me completely  cold. Competition playing being only the most obvious- though it was not always thus. The actual mechanics of  gaming being another, I know that some of you get an adrenalin rush from the actual game play - but I for one now very rarely approach the actual dice rolling with anything more than mild interest. Yet there are chaps out there who view the dice rolling as a life or death experience- Oooh- ing and Arrgh- ing over every 6 or 1  by gum its  positively childish - come on chaps you aren't ALL  6 years old. all of the time
Mind you the whole of life is starting to look like that- witness the "we're gonna make 'em squeal" from some recently elected Republican Bimbo gracing our TV screens as we in the UK suffered the US mid-terms. Is that kind of triumphalist nonsense the right way for a "serious" politician to behave? Not that she was unusual- just a tad extreme- you get the same here - just a bit more muted thank God. Yet the overplaying of emotion is now the norm in many places, it is as if we are supposed to behave like  spoiled brats    therefore many do.
That - as far as "popular" culture is concerned  over emotionalised over hyped  light-minded fluff  is now expected to take the place of actual thinking has been the case for some years. The idea that fads and fashions are more important than actual progress in any direction is now something we live with in most walks of life-
Witness Professor Brian Cox  highlighting the change in the broadcasting of science programmes on TV  in the 1970 and 80 with such giants as Prof Bronowski (The Ascent of Man- I still have his fine book)  and James Burke or Carl Sagan  with thier 13 episode series  and the 3 or 4 episodes more likely in a series of today.(Not to mention that shazam-kapow  special effects often take the place of  the actual points being made)  The public attention span- even of those actually interested is shorter it seems or it is perhaps the attention span of the programme commissioners- who want to do another X-factor for the ratings war(Gawd 'elp us).

In our world-  Witness the number of "games" that are now out there. We are no longer it seems supposed to call them "wargames rules" or rules for a given period  - they are "games" even when they are not "wargaming lite"  . This of course means that when you catch 'em out with some piece of poor research or  crappy army lists they can whine "Well its only a game" as their ultimate- and perhaps only defence. However I do not altogether blame the "Games Corporate Dudes" for this. As so  often we do this to ourselves. or is it " the public wants what the public gets " -  I'm never sure . but it does seem that many are  more secure about their hobby the more lightweight and brain free it is.
This I really don't get at all .
WANTING to be thought of as  thick and or childish ????
Give me a break !!
It is as if I'd be better off reading the ladybird book of Cavaliers and Roundheads rather than say Reid or Young  or Woolrych or- perish the thought- actual sources from the actual period . Has the mainstream become so lightweight that this is now the norm- or as I suspect is there no real mainstream anymore. As the hobby becomes more diverse the public face- and yes this is about public face is no longer the "best" but merely the loudest or most currently fashionable that is seen  to be the "in thing"  hence the popularity of WW2 currently - around a third of the games at Donnington from  6 years of Military History- most of that third actually form 2 years.- albeit a rather crowded 2 years !Or the number of assorted GW- a Like "games" you see at  shows- all looking very very similar except perhaps for the logo of the "Not GW at all" outfit running the game. the accent being on game- therefore in theory more "accessable" - read more sales potential . An incident at Donnington brought this into focus- Daddy had brought young Tarquin to the show  they were observing the rather fine Vietnam game put on by my mates of the Border Reivers club . Daddy in hs wisdom opined that the "Good guys"  had to catch and kill the "terrorists" . and that was wht it was all about- lets go and see the Space Orcs ... . Now Daddy hadn't been around when Vietnam was  going on and had obviouly been asleep when as a young lady once of my aquaintance puut it "We did that in History"   so like any good father he  spread the BS but it did make me wonder. People just seem to take less notice of the world than they used to and have less desire to know . One is forced to wonder why this is. .
However back to the plot- if there is one ....


Lets face it GW  has everything the  teenage boy of any age could want- especially if he is 47 and  still lives in his mothers attic and has no real life to go to . It has blood and torture and nastiness and more blood- even a bit of cannibalism ...all very juvenile Check out - if you can be bothered- I was "relatived" into this- the painting tutorials- now the chap is a very  good painter no argument  but what a smug  self satisfied git he looks ... "Don't forget to shake the paint !" - with hand motions yet ! . At this point my laughter was unrestrained ! - I assume you don't need a picture !
It would be sad if it wasn't all so bloody samey-  like the recent survey in WSS- Robbie Roddiss has commented more fully on this  but is less cynical than I- after all we are now supposed to call the Renaissance "Pike and Shotte"  after the overpriced warlord set so the thickies will know what it is- "Old West" is now a proper period but the Dark Ages has disappeared - subsumed perhaps into medieval  to boost the popularity of that period-  so now Henry V and  Jean Le Bel are the same period as Ragnar Hairy -Breeks- a mere 400 years and an awful lot of culture  separateing them  from each other. whilst such murderous thugs as William Bonney and Harvey Logan (Billy the Kid and Kid Curry)  get a period of their own and are sanitised   and made  the heroes they were not. . This is doubtless the influence of movies - and perhaps "historical Novels" which is highlighted in the survey and which to be honest I found  less than wonderful .
Can't think of a single movie that has made me want to game a period- and yes I'm a bit of a movie buff . The nearest would be the 2 verions of Henry V- but then I was already a medievalist who loves Shakespear so how much did that obtain,? Likewise historical novels- I have a few of the classics- Mist over Pendle springs to mind and of course Rosemary Sutcliffe but much of the modern stuff just leave me cold Cornwell gets samey after a dozen Sharpes and Scarrow is simply Sharpes Romans- I droppes out after 3 . They are just so wearisome and samey. The Matthew Hervey novels are significantly better- the language  is more precise and period for a start and Matthew Herey is no superhero but even they are getting a bit repetitive.
No  apparently we must simplify to make it easier for the proles to understand. This is at  best patronising at worst downright insulting- but again we do this to ourselves. You keep buying the mags . Enough of you subscribe - and do it loudly - to the army list and points value crap.  Its your fault.  you ask to be spoon fed. .
Yet having said that the survey did point out that a good proportion of the readership  did still like to research their chosen period  so it's by no means all bad news. There are still blokes out there who subscribe to the "Compleatt Wargamer" idea(apologies to Isac Walton)  I was pretty pleased by this .
This is GOOD NEWS.
Perhaps we'll see the results of some of this research in the pages of the glossies instead of more droning on about how to roll a dice  or tedious scenarios for rules I've never heard of ......
Posted by Big Andy at 03:12 9 comments:

Next up from Drabant.

I have recently recieved this picture from Nick at Drabant of the new Norman Crossbowmen set . Well up to the standard you expect from Drabant 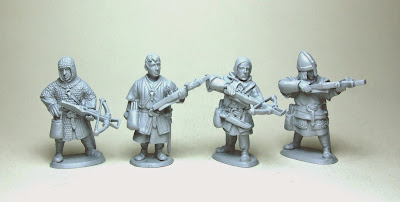 Not really anything else to say here  except that I'll be getting stock in as soon as I can along with re-supply of otrher Drabant models in both 40mm and 28mm
Posted by Big Andy at 03:03 No comments: