Here are some more examples of Jez 'sWork- not  turned into comic strips  by me this time.

I do like Jez's work  Not only that unlike more than one painting service I could name he delivers when he SAYS he'll deliver. I'm sure many chaps have waited days. weeks , Months  even years for stuff from some of the less scupulous dudes out there- even after you've paid deposits  so I'm happy to endorse Jez as he's not like that at all.  Find his blog http://shakespearestudios.wordpress.com/ for more info.
Posted by Big Andy at 03:37 No comments:

Sometimes you just have to.... 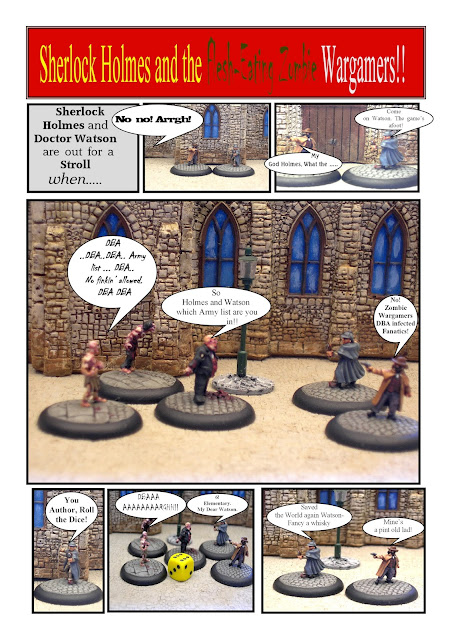 Jez Griffin of Shakespears Studios sent me these Bluemoon 15mm figures from the Horror range that he had painted for me to photograph.  As always  Jez did some cracking brushwork and just to be clear Shakespear Studios have my heartiest recommendation as a painting service . Good work delivered in  good time - can't say better than that.
Right back to the plot, any how there am I with these tasty 15mm chaps before me thinking just basic snapshots do not do them justice. so hence the above. Remember if you can't take a joke you shouldn't have joined.
Enjoy.
Posted by Big Andy at 04:27 1 comment:

Reading MW recently I noticed that the editor opined  that the Medieval was a bit of a left behind period. Now he may be right . Many wargamers really don't seem to get Medicals- not least because its not one single period. The armies from the Battle of Hastings to the End of the Wars of the Roses or more roughly 1100-1500 are at least as diverse as those of the "Ancient" period. At one end we have Norman Knights and at the other Landsknects. However the  next time I see 13th century troops on the same table as 15th century-"cos they are all medieval "  would not be the first.
Also the middle ages is cursed by - in some ways- being thought of as "good for skirmish games"  which is often the kiss of death as far as historical accuracy goes.
For myself I've had an interest in the period since my earliest wargaming days but of later have not owned any medieval armies- the 40mm Wars of the Roses are not yet table ready- since the 1990s.
Nevertless I still have the books- from basic Army lists to Froissart and Jean le Bel  taking in deVries and Verbruggen, I even have a few odd painted units.

I think part of the problem witn Medievals is of course Heraldry some chaps just can't face painting individual knights and so make it up rather than use the many books of rolls of arms that are out there. Personally I'd rather face a dozen quarterly coats than  the endless tedium of Napoleonic French line Infantry(always my personal bete noir)  and there is no arguing medievals ARE pretty.
Now my problem here is deciding where to go  I have lots of bits and pieces- painted for the show display case over the years. We have an exstensive Medieval range covering a lot of different armiesand sub-periods . All the obvious ones- Hundred Years War, Wars of the Roses, Crusades Scots English French  but also Flemish Hungarians Irish Turkish Imperialist, Hussites, Italians  Poles Russians and even Transylvanian  can come from the Old Glory ranges. .
All of these armies have characteristics of their own  so you know I can't decide.
So will I expand my few Scots and add to the small English army I have or perhaps add to the few Italians.

The Primacy of Idiot Books.

This morning , Gentle Readers, I noticed a piece on TMP advertising some new Idiot Book - or Army list if you like-  for Flames of War-. No problem with that especially as I use Command Decision  for WW2 anyhow. Nevertheless amongst the associated comments were several lamenting the fact that their currently owned idiot books were now "not current" and therefore presumably useless to their owners.
Now up to a point I get this but only for regular tournament players- after all the Laws of Rugby Football get changed every so often and so therefore presumably do lesser sports., therefore why not competion based wargames rules?

However it struck me that as a non tournament player why the hell would you care unless your brain was in fact made of porridge or as one chap once put it to me in some heat
"I don't need to read about WW2 I play Flames of War" - still trying to work that one out....
Not that the primacy of the Idiot Book  is confined to FOW or indeed is all that new- Older chaps will remember the occasionally  unsavoury debates in Battle and still more in Slingshot  concerning the relative merits of sundry WRG Army lists however in those days of Yore much of the debate did seem to centre more on historical grounds - at least on the surface-  I wonder if this is still the case?
Now I haven't seen a copy of Slingshot for years so I've no idea how it is today but it does seem to me that Joe Wargamer is far more willing to have his rules handed down to him from On High (or perhaps Nottingham)  by some latter day Corporate Moses than the lads of the 70s and 80s were.
For myself I've never been an uncritical  fan of Army lists- not that they don't come in handy from time to time especially for the "pre-regimental" periods  or those in which I have only a passing  or  newly formed interest.
However I could never imagine myself using such things for say the ECW or the Hundred Years War or Napoleonic or indeed any period where I've actually read more than a passing Osprey. I suppose that once again it comes down to the difference between "playing to period " and  "playing to ruleset"

Now I do have some army lists- but even here there has been a change over the years.WRG's Rennaissence  set had one slim volume of lists FOGR has a good half a dozen or more.FOW gawd knows how many and these are far from the only ones. It now seems to be the thing to publish as many wallet catchers as you can -perhaps these chaps resent you dear Gamer spending your cash on actual soldiers....  or perhaps the plot is even more sinister- stop 'em reading actual books then once we have them by the parts we can feed 'em any kind of exspensive tripe and they won't know the difference...  but THAT IS just plain SILLY....
Posted by Big Andy at 06:46 7 comments: