Look what I found- part 2

More daft discoveries from the depth of my drawers. These I believe are Connoiseur from almost 30 years ago. I certainly had these before I was in the toy soldier business so at the least over 20 years(Yes chaps 2012 is OGUK 20 th year in business) I found the camel corps chaps first along with the rest of a partly painted unit and some kneeling camels- but no dismounts. Now the Sudan has never been one of my things so can't think how I came by these. The civvies and goats etc have been used more recently in modern games but even they havn't been out of their bioxes for a few years 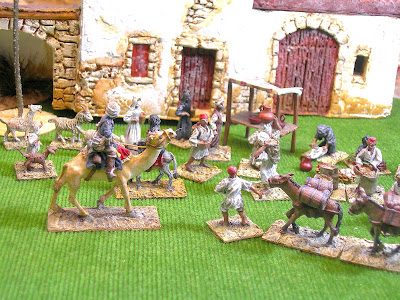 To bwe honest I blame this whole found it thing on the entirely fictional Colonel Kurt Stallone of the 69th Marine Independent Landing Force since it was his group I was looking for. The good Colonel and his cohorts represent my only non-historical foray. whats is known in our group as "silly Sci- Fi " Silly becasue of the truly bad jokes therin 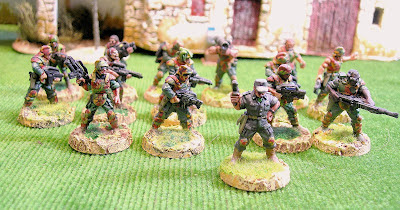 Here we see the Colonel and his men on the streets of San Antone in the Jordan valley in the republic of New Nevada on O'Tooles World s Doubtless searching for Denzil Wahington Snipes and the Terrorists(Freedom Fighters) of the Armed Revolutionary Socialist Executive. Told you it was daft didn't I.
Posted by Big Andy at 03:47 No comments:

Forgive the alliteration in the title but I'm never one to resist a bit of harmless silliness. So as promised here is a picture of the slowly growing Bavarian forces for the WSS. All Bluemoon 15mm- or 18mm if you are picky 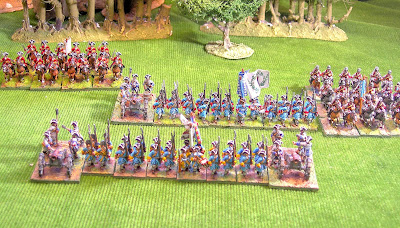 I have to say that although John Reidy painted these lads- fine job too- I flagged and based 'em myself and pretty fiddly it was too. Worth the effort though.
Posted by Big Andy at 03:29 1 comment:

Well its good to be back now the damnable flu is almost gone and I don't have to stop to cough up a lung every half hour I can turn my attention to this blog again. As it happens I was sorting out some old gear the other day and came across these 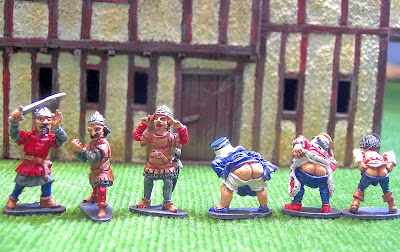 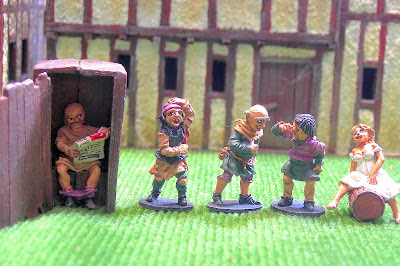 I bought these about 20 years ago from Minifigs USA when I was over at Historicon they are to say the least a little odd. The first pic shows the King ,Queen.,Prince and sundry palace guards showing their contempt for the opposition ("Your father was a Hmaster and your mother smells of Elderberries!! ) and the second pic shows the revolting peasanty . I have never yet found a use for them myself- they were bought purely for amusment value and they may go in the "For Sale" box along with some other ex- display units which don't have armies. The next pic is something a little different 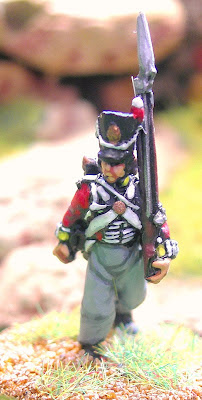 He's a Bluemoon British Napoleonic painted by Jez Griffin of Shakespear Studios- and yes he's 15mm or 18mm if you prefer. Now I knew Bluemoon were tasty but this shows just how tasty - close up - aided massively by the fact that Jez can paint a bit. Next photo session I'll do some shots of my slowly growing 15mm Malburians. Gawd me doing 15mm Who'd a thought it.
Posted by Big Andy at 06:41 3 comments: