"Charge- your Pike " and comparative pricing. 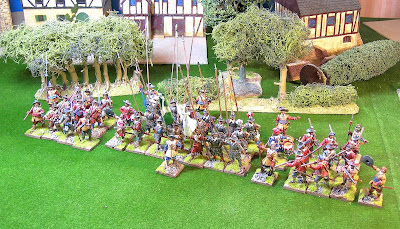 An ongoing thread on the Old School Yahoo group about converting Young's Charge rules to the ECW got me thinking so there I was searching for appropriate info on what ECW stuff was available in those far off days when I came upon my copy of Military Modelling ISSUE 1 January 1971.
Afew comparative prices are absolutly intrigueing. I quote
Lamming 20/25mm Cavalry 2 per box - with horses- 7/-each Now as Mil-mod was only 3/- per issue at the time this would make1 cavalry figure more expensive than the magazine.
Translate that to today and you'd be paying a fiver for a single 28mm cavalry figure- given that most of todays glossies are 4 quid plus each - current Miniwargs price £4.25 . Around 3/- (15p) seems to have been the norm for mounted figures back then-(Garrison were 3/- each with fpoot at 1/3d each a box of Airfix would cost you about the same. Some outfits were more expensivew some less so but while comparisons are not exact its interesting that the actual models are in real terms cheaper than they were then - 3 bob was a lot of money certainly 2 or 3 pints (I was a bit young to know precisly) Now asingle pint will cost you about the same as a 28mm Cavalryman Hmmmm choices....
For me -despite the nostalgia for the old days - we have a better hobby now with more competititon - more companies and, on the whole, far far better product- at least as regards figures.
Now the photo is a depiction in 40mm - using my own Jacdaw and Romanoff figures a "battalia of foot a la Peter Young as depected in his article in the december 1969 issue of Bayonet. . I have placed the figures as he had them in the diagram- with the exception of the CO who I have placed- dismounted at the head of his regiement as would have been practice in the 17th century.
Andy
Posted by Big Andy at 06:08 3 comments: 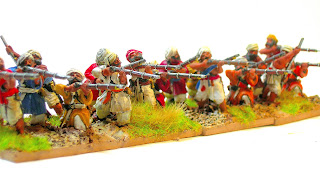 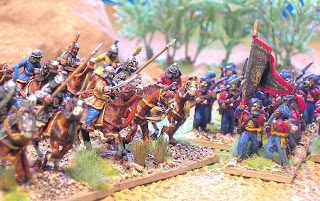 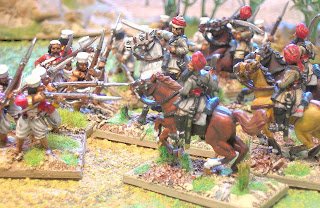 The Search for Reality- part 2

THE RESISTANCE LIVES ON ....


The ongoing debate on the Old School wargames Yahoo group which started as my poor first impressions of "Black Powder" has expanded beyond all recognition into dicussions of scale, battlefield Casualties and weapons effectivness. Some of it is pretty esoteric and basically boils down to the differences each of us has when we examine what we do. As an debate it's interesting but unlikly to change opinions. I've learnt a few things so its not been a complete waste but as ever I'm mildly surprised by - in what is a history based hobby - how many apparent "history haters" there are out there. Now that's deliberatly a bit strong and its probably truer to say that its the "empiricists" vs the "gamers" with perhaps a third faction - a small one- the "humanists" - having a bash at both sides as occaision serves .
For myself I'd say I'm a humanist with a shot of empiricism on the side- for me both are important. The "numbers racket" of the empiricists is a foundation and helps us quantify the quantifyable- weapon range movement speed etc. But the human element - mewmoirs battle reports history books prints and paintings put the flessh on the bare skeleton of the number crunchers.
Were our hobby a mere "gaming excercise" for "FUN" I'd be doing something else - watching paint dry perhaps or reading Paradise lost .
There are - contrary to the "Funsters" (another faction perhaps) many kinds of enjoyment and while I find some of them peurile that does not make them wrong in any way. Live like you wanna live Dude but that works both ways surely?
Now to be honest there is no such thing as a perfect set of rules - various systems do various jobs at various times. I shudder to think how many rulesets I've tried in 40 years but that doesn't stop me trying, maybe I'll get a bit of insight into how this or that worked.
In 40 years I've solved the odd problem- at least to my satisfaction latterly I've found most problems can be sorted by an Umpire who knows hisa stuff.
Quite why so many wargamers are anti- umpire I can't fathom. Its seems to be based around the fear that they may end up being one. Twaddle !.It's fun - in the broadest sense- espeially with adult players who also know the period. Its the normal way we run games at the T.W.A.T.S.. The idea of 2 player "head to head lead" no longer has appeal- I've done my shareand want a different experience one that - in an ideal world is intellectually stimulating , socially diverting and yes even that overused word !fun" - oh and preferably with beer in it ! .
What I don't want is to be patronised by over glossy rulesets with buckets of eye candy and comparatively thin content . Told that they are the best thing since sliced bread (to be fair NOT by the publisher) and if I don't like 'em I don't like fun - well not that kind I prefer to use my own brain thanks You can continue to plumb the shallows if you like
I'll not be dumbed down ...
The Resistance Lives on....
Andy
Posted by Big Andy at 04:36 2 comments: