While it would overstating the case to say my latest purchase from Helion's "Century of the Soldier" series gave my postie a hernia- it was a near run thing. This one is a meaty tome of some 400 pages

It is also rather good and very useful.
My knowledge of the Civil War in Cheshire was limited to R.N. Dore's dated but useful - and rather slim volume  plus the various  snippets in those books one may tem "The Usual Suspects"- Reid, Rogers and suchlike.
The meaty volume fills that gap admirably.
Sir William Brereton's Cheshire Army - fighting for Parliament- had never previously been studied in such detail and there is no doubt Mr. Abraham knows his stuff. Not only is there a narrative of Brereton's campaigns but more substantially details of units and organisation as well as  how the Cheshire Army was raised and paid for.
We find out that Cromwell was not the only officer to have a "double Regiment" of cavalry- Brereton's was also a large regiment- though it did tend to fight in smaller sub-units that Old Noll's Ironsides. The colour section contains illustrations of many of the Cornets of the individual  troops of Brereton's Regiment along with - amongst other photos a rather splendid one of a re-created Dragoon.
It may well be that my ECW figure collection will now gat a Cheshire continget- to fight the "Lings Irish"- when I get a hold of THAT volume.
This one however is highly recommended.


Coincidentally arriving on my doormat a few days late was my copy of JSAHR Journal for spring 2020 . If I was only allowed to keep one  set of magazines or Journals  and had to dump the rest  it would probably be this one. This Journal is at the top of the list that most  current wargames magazines are near the bottom of in terms of choice of magazine reading. While the Arquebusier- Journal of the Pike and Shot Society runs it close. The JSAHR journal  covers a wider timespan. This issue no 392 has articles on the ECW, WW1, The War of Austrian Succession and the War of 1812 and very particular and detailed for their specific subjects they are- I now know the names and heights of some of the Drummers in the Canadian Fencible regiment for example!. This is not a usual wargamers lightweight read but for those of us who like to delve a little deeper. 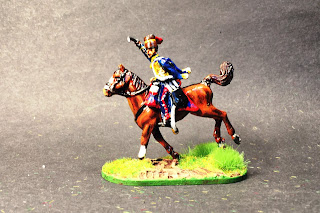