As an exercise it was quite hard work..Jim the painters comment that we needed 2 umpires was apposite - he took over the last few moves as my head was throbbing .
Actual troop numbers were fairly substantial. On the Allied side their battalions avaeraged 28 figs each though Von Donop was 48 and the Lieb Grenadiers a mere 14. Cavalry squadrons were most often 8 figures with the British having 2 3 squdron regiment and a single squardron with the Hessians/Dutch haveing a single Squadron plus a troop of Hussars.
On the French side Most of their squdrons were again 8 figures but there were some 6figure s and a 10 - fitzjames and a12 - Royal Dragoons. Infantry avaerages 28 figures but the Grenadiers de France were 52 .
In terms of make of figures most were of course old Glory but Stadden Willie Front Rank and Eagle were also represented as were Jacdaw- I just don't have many Jacdaw painted yet.
So in rough figure numbers the Allies disposed of 320 infantry- including Jaegers 58 cavalry and 6 guns- including 2 battalion guns which had to be asigned to specific infantry units.
The French had 308 infantry including lights 104 cavalry and 5 guns- including 1 heavy piece.
In analysis the question remians why did the French footle about ??? They singularly failed to "get tore in" while an Allied defnsive was an obvious move for a somewhat outnumbered and certainly out horsed army . The French Cavalry was not used well- niether were thre brits . There was no major cavalry vs cavlry figt in the whole battle-on the French right their horse did achive a victory of sorts against the British but were too few to exploit it .
Niether commander showed at his best that day.....
Perhaps a veil should be tactfully drawn over the affair and we should await the next campaingning season to begin...
Andy
Posted by Big Andy at 00:43 1 comment: 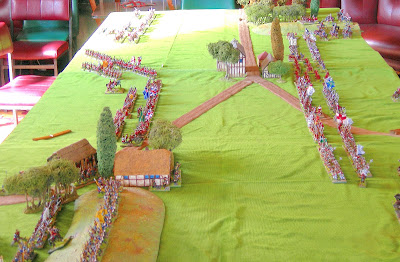 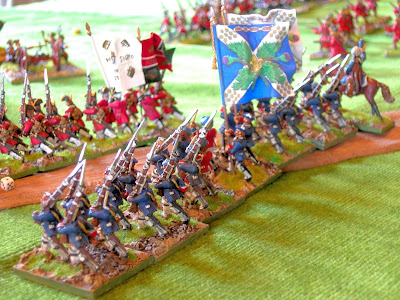 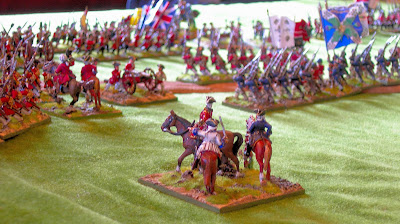 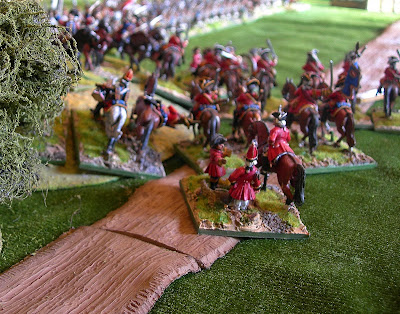 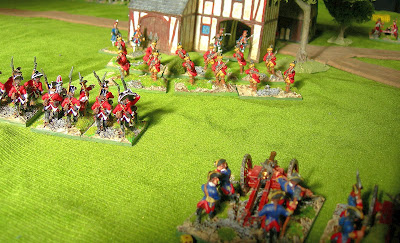 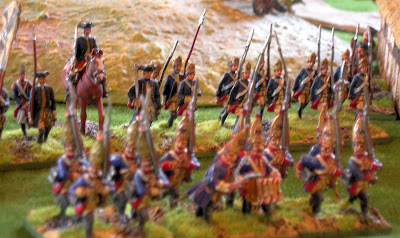 A bright crisp day saw the arrival of generals troops and terrain at the Commercial Inn- Tantobie Co Durham known as the "COMMIE" Locally but strictly speaking is now actually
"The ..... RI... as all the other letters have fallen off.
Nevertheless 5 members of the Tantobie Warfare and Tactical Society and 3 Border Reivers Wargamers converge upon this hostelry for our almost regular monthly game. This time I was in the chair again and so elected to dig out the 18th century troops for a largish encounter battle.
Now read on.......
The French army disposed of 10 infantry Battalions 15 cavalry squadrons and 5 guns plus some light troops while the Allies consisting of British Dutch and Hessian troops deployed 12 infantry battalions 9 cavalry squadrons and 4 field guns plus 2 battalion guns attached to the 2 British Infantry brigades.
Rules were a somewhat modified version of Warfare in the Age of Reason plus the experience of your steely eyed and granite jawed Umpire.....
Both sides were hesitant at first and movement was kept to a minimum. The Hessian
commander- actually a Dutchman - Hertz Van Rentaalls by nom de plume watched anxiously as a mass of French horse bore down upon him on the Allied right. There was little he could do but grit his teeth.and order Hessian regiment Von Donop to stand fast on their ridge. The Dutch Garde Te Voet moved up in support along with the Hessian Lieb Grenadiers. Dutch Gunners worked like trojans to get their guns into position before the grip came.... The first wave of French Cavalry came on- FitzJames Horse and a squadron of the Royal Dragoons . Fire leapt from von Donops muskets and when the smoke cleared the Royals were gone loose reined the sorry remnants galloped from the field. Fitzjames however were of stronger mettle despite many an empty saddle they closed with the Hessians and a fight ensued- alas they simply were not strong enough to do more than disorder the Hessians and the remains of the regiment drew off to make room for the second wave- 2 squadrons of Cuirassiers du Roi and another of Dragoons . Again the French charged in Gallantly but this time to even less avail a fearful volley from VonDonop smashed the Curassiers flat ably seconded by the Dutch gunners - A troop of Dragoons got amongst the gunners and a shout of "Nails! Nails !" went up but there were none ,  the dragoons however were enough to finish the gunners. The  supporting LiebGrenadiers enough to finish the Dragoons ... The French Horse had shot their bolt.
What .I hear you ask, had been happening in other parts of the field while these momentous events unfolded on the Allied Right- well not much to be honest... The French maintained they had a plan but no amount of enquiry by your gentle Author could uncover what it actually was.
On the Allied left fear of the French artillery was causing the British cavalry some concern- Your author could hear the Marquis of Granby spinning in his Grave at such craven behaviour. When the British Dragoons finally launched their attacks the French barely broke sweat seeing them off despite some French gunners standing not upon the order of their going and legging it for the rear. The French right was never in any real danger.
In the centre peace reigned- a little bickering between the Schomberg light infantry and the British line resulted in heavy casualties for Schoomberg . The French plan seemed to involve neutralising the British Guns before commencing an advance. This last is however a mere guess as finally the French centre began to move. Fire rippled along both lines but the additional firepower of the British Battalion guns sent 1st battalion La Reine reeling back. However the British having suffered from French guns and indeed light troops were not prepared to move and stayed nailed to their positions.
After shattering the French Horse Van Rentaals had been given furiously to think- a not common event after calling for the Bols he decided to advance his command from the ridge to menace the remains of the French horse and threaten the centre but as dusk approached little more could be achieved and his thrust petered out.
On the other flank despite defeating the British Dragoons the French cavalry no more than 3 squadrons- were not strong enough to do more than support their own foot. so the action petered out into a muttering of skirmishers as night closed in.
In truth it was an interesting fight- the more so because some of the players exhibited a pusillanimity I didn't expect. The main body of the French horse was handled with courage but was in the event thrown away to little avail.. The foot of both sides- excepting the Germans and dutch lacked resolution- though the British could claim with some justice that they were merely acting on the defensive.
Both sides exhibited fear of artillery to a -to me- ridiculous degree and allowed their plans to be influenced by it.
Nevertheless as the saying goes a good time was had by all- and a few beers drunk too..
Andy
Posted by Big Andy at 02:43 6 comments: