When I was at school (when they still had flogging) there was a teacher  who opined that any boy who had not read 20 books in a term was by his own fault a dullardand a cretin (the B*****D'S favourite term of dissapprobabation) . Now this old bugger was out of date even in the 1970s and didn't specify what kind of books these should be though he did quiz us on what we had read... so I kept quiet about my "Victor Book For Boys" and told him about  Rosemary Sutcliffe, Arthur Ransome and R. F. Delderfield (this last chap not only being a quite tedious novelist wherein  I spent a tedious couple of days as an extra in a TV adaptation of  his "To serve them all my Days"  but a not half bad Napoleonic Historian- Try "Imperial Sunset" and "The March of the Twenty- Six"  a bit dated now perhaps but worth a read.) The point her of course being that I got away with it unlike some of the less literary members of 3E who - poor slobs- had to endure a bawling at which if it happened today  might have involved the appearance of Child Protection !

However the other point is that even at that tender age (13)  I read books that didn't always have pictures in and I didn't use my fingers to follow the long words. This has stayed with me. The literary side of our hobby is important to me but not only within the hobby.
What started this train of thought was  re-reading Helene Hanf's splendid  84 Charing Cross Road a wonderful little book made into a splendid film with Anthony Hopkins . It caused me to ponder upon essential Reading that did not include wargaming or even military history.
Shakespear is obviously near the top of that list and a bit of Jane Austen can do you no harm.. I love the precision of the language. I may get pilloried for this but I could never get on with Dickens you can shove " A Sale of Two Titties" where Rev. Spooner  would not want it to go! I do quite like Dorothy Parker- again brittle humour combined with pathos and on our side of the pond Evelyn Waugh- though it has been a good few years since I read any. I still look in at P.G. Wodehouse- I have 4 volumes of his stuff  with more to get- for light relief.  Of poets T.S.Eliot, W.B Yeats and Robert Frost spring to mind. All these dudes are of course "SERIOUS LITERATURE" as distinct from the more popular sort that most of us read
So a question.
What serious literature do chaps read if any  and also therefore what do you consider to be serious literature

Stephen Huckaby- the Man from Rave Banner Games  sent me these 3 pictures of his upcoming releases which, as soon as they are available, I will be adding to the OGUK product list.
Hopefully I will have these in time for Salute on April 22nd 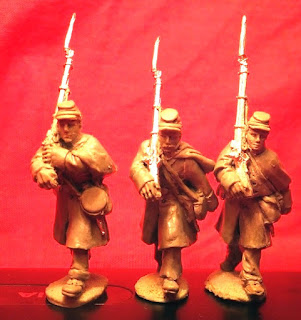 You don't often get figures in  greatcoats or foul weather gear- yet warfare did go on in the rain .....


I realy do like the look of these- even though I don't do ACW in 28mm - don't really do it at all any more. The 40mm have not been out of their boxes for 3 or 4 years. However these lads are tempting my paintbrush.

or if in the US on Raven Banner's own site
http://shop.acwgamer.com/

It will be intresting to see how this range and company develop.

In Time for Vapnartak at York.

I'm currently unpacking 11 crates from the USA- which incidentally are costing me a grand more than the same order this time last year- not in US dollars of course but in post- Brexit not as good as they used to be pound notes. However it is still cheaper than trying to produce the stuff in the UK what with business rates and local council kickbacks and rent for premises (which is outrageous)and VAT  which adds more costs so despite the current burst of lunacy I'll keep at it.

so new stuff for York
Top of the list will be those splendid Raven Banner Games ACW figures mentioned in the previous post
Also a couple of new packs of Sash and Saber ACW.- Frock coated Confederate Infantry. The Sand S  range now stands at over 50 packs
There are also some new Blue Moon ECW packs - but not the guns which did not seem to be included in the shipment- I've added them to the next order.
More Napoleonics in the shape of more late Saxon Hussars and Artillery crew both horse and Foot
so about 17 or so new packs for York- more than some dudes have in total
Oh and all the normal stuuf- the ECW range and most of the Saxons have never been to a show before .....

Raven Banner games are a new- to me- American  company just starting to produce some really tasty 28mm ACW. I am now  selling these in the UK and Europe.
The first 7 packs are up on the website
http://www.oldgloryuk.com/28mm-american-civil-war-(rbg)/55/241

Personally I think they are some of the best ACW figures I've seen.
They have a slightly  scruffy campaign look to them very reminiscent of the photographs of the period, but are splendidly sculptedand have good anatomy and movement.
So far there are only the 7 packs- 3 vignette sets and  3 unit packs depicting the 33rd New Jersey in their rather badly fitting "chasseur" uniforms imported from France. The 7th pack is an extra set of command including a mounted officer.
More packs will be added including some Infantry in greatcoats which look splendid and I'll show them to you when I can
However for now here are a couple of pics of the 33rd New Jersey chasseur types. 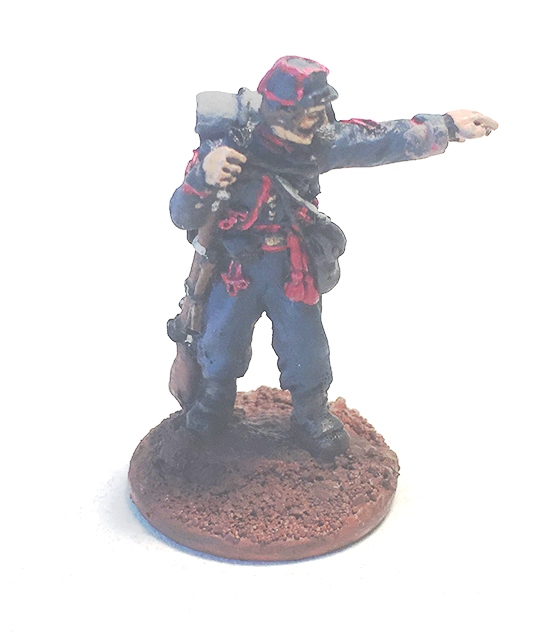 An army marches on its stomach.

Now this post has nothing at all to do with Wargaming but is rather about my other minor passion - Cookery. Yes actually making meals for myself and Carole that don't come out of a packet and have never seen a bloody microwave- won't have one in the house ! Awful things.
Now don't get me wrong I'm not really a total Foodie but probably a bit of one (and yes every possibly punning connotation intended) with a limited repertoire yet !!
But I've never killed anyone I've fed- nor even given them as much as a tummy ache- unless it was from stuffing down seconds.
Of the world cuisines I've tried a few  Anglo - Indian Anglo- Chinese and American- Chinese- somewhat different.
Greek , French , Dutch- Indonesian, American,  German, Belgian, Thai , Tex-Mex, Italian and Spanish and of course English Scottish ,Irish and Welsh.(Welsh Cakes and Irish Soda bread- done properly are truly splendid and I don't object to a decent Colcannon either. Ayrshire round may just be the best bacon on the planet and a good Scotch pie- though perhaps an acquired taste  can be superb.
There was a time when British food was incredibly boring  and indeed at times  still is though for different reasons. Top of my tedious list is the "classic"  British Roast Dinner or Sunday Dinner. When done well it can be quite acceptable and even good but as a home cook it is a hell of a faff for not very much in the way of style or flavour- the now old fashioned British aversion to anything resembling herbs or spices(except yellow curry powder) is still in evidence in pubs doing "Sunday Lunch" Beef you can sole your boots with boiled veg that- if you are lucky, still has some vestige of flavour. Often at these pubs you get out of a packet Yorkshire Puddings (God Damn Aunt bloody Bessie) that make reasonable shrapnel shells when stabbed. Obviously for some culinary variety is not the spice of life.- or this kind of stuff would not be so popular- likewise such  dangerous dross as Macdonalds or KFC-  "A coronary in a bucket please with extra salt and sugar ! "

So far myself and Carole we tend to have gone quite Mediterranean in our diet- especially as my current favourite cuisines are Spanish and Italian. Good Tapas and chilled Fino sherry are a combination made in Heaven and I've just acquired a book on Tuscan cookery and now love Garmugia amongst other dishes.

In case you all think I've gone metal  there is of course still room for the indispensable Bacon Buttie- at shows and a TWATS meeting simply would not wash without Landlady Jean's excellent Beef Butties and chips.
Posted by Big Andy at 03:18 4 comments:

Email ThisBlogThis!Share to TwitterShare to FacebookShare to Pinterest
Labels: Food and Drink

Thank God that is over at last.

Well the holidays are over. Not that Carole and I really had any. Christmas was a total frost due to an outbreak of some  kind of Flu like virus so all plans went out of the window. Then of course you get those people to whom the rules simply do not apply. That is - these days- everyone who wants anything NOW.
To be sure these are overall a very tiny minority but you end up spending more time  on a chap who thinks he's Trump if he spends a tenner than on blokes who spend  a few tons or even a monkey or more. This of course is a fact of retail life and works in any area of endeavour and is by no means just  a wargaming thing.
So the world is back to more or less normal. I've almost stopped trying to cough up a lung every 10 minutes and even got a tiny bit of panting done. Though nowhere near as much as I'd wanted. For instance I've cleaned up but not started a  group of the new Blue Moon ECW range. Hopefully it will develop over time into the Dunkirk Dunes campaign.
I'll have to get a copy of the Osprey "The Pikeman's Lament" even though I suspect it won't be very 17th century. However until I actually get one I'll give it the benefit of the doubt. Mind you  being told it is based around "Lion Rampant"- which I do have does not fill me with confidence.
On to other stuff.
"Shinyloo" moves on at a pace slightly faster than glacial. with figures being added to both sides. The first game will definitely take place this year- only 6 months or so behind schedule.

There are now almost 200 figures painted for "Shinyloo" with the French having a large preponderance of Cavalry.. Certainly enough for a small "beginners" style "Charge " game. However we'll see. I may use Featherstone instead or perhaps a melange of both.  After all you don't have to tie yourself to a given set of rules.