Catching up on my Reading 9

Brazen and to the Point.

When I was at school a very long time ago they still had history lessons where they taught you stuff. Now WHAT they taught you was often later proved to be twaddle but that is beside the point. You were expected to regurgitate it-twaddle or not- so you could pass your exams.

Some of this was actually Military History of a sort , including the Battle of Minden  during the Seven Years War where apparently 6 battalions of British infantry shot the whole French Army to bits in the supposedly usual manner and won yet another famous victory .. oh and there were some German chaps on our side who helped a bit.

Over the years of course you find out that it wasn't quite like that ......

Nevertheless I suspect it was partly the twaddle they taught you in 1972 that was the initial spark for my interest in the  British contribution to the Seven Years War which despite some periods on the back burner has never completely  left me .

So it was with considerable interest that-

by Ewen Carmichael came to my attention 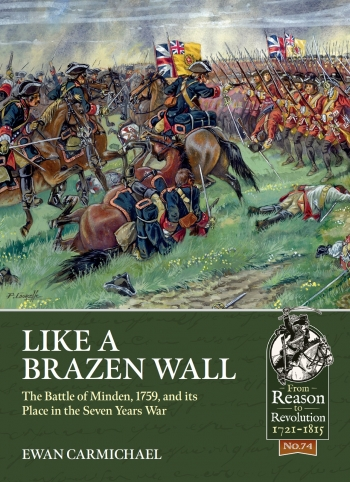 Published by  the ever busy, Helion this is a meaty tome of some 265 pages of which not one is wasted.

I do sometimes think that the campaigns against the French in Europe during the Seven years War often get a bit of a raw deal compared to the campaigns of Frederick the Great against the Austrians and Russians. This books goes a considerable way to redressing that imbalance.

The author clearly knows what he is about. In 16 Chapters and 6 Appendices Mr Carmichael (actually a retired Major-General and currently Chair of the Society for Army Historical research) tells the story of the famous battle and puts it firmly into the context both of the campaigns against the French and indeed the overall context of the Seven Years War in Europe.

But this is not merely an overview, the detail is all there. Orders of Battle, Uniform details,(these encapsulated in a collection of tables) lots of contemporary quotes- often from European sources as well as British ones.. The depth of Mr. Carmichael's research is all there for the reader to see.. This is a formidable book telling a sometimes complex story. What becomes admirably clear is what a very mixed force the Allied commander, Ferdinand of Brunswick actually had to draw upon and how few of his troops were actually British. The vast bulk of Brunswick's army consisting of Hanoverians, Hessians, Brunswickers and even a few Prussians.

It is this depth of research that I found most impressive but there is yet more. There is also a Guide to the Battlefield with some useful photographs and some delightful colour plates by Patrice Courcelle showing uniforms of some of the combatants. Add to this a decent crop of maps showing both theatre operations as well as battle details and we have a book that students will rerun to again and again.

Niggles - well no not really , if I was picky I could have wished for a few more contemporary illustrations but that really is my only 'complaint'. I heartily reccommend this book to any interested in the Seven Years War.