Now it is not that often that the Tantobie Warfare and Tactical Society  go floating about on the Briny  but this month Theatrical Steve was in the chair and decided to run a Napoleonic Naval game.
So with four members turning up to our usual watering hole in the relentless rain we grabbed our backstays and clewed up our fores'ls and set off
Steves rather spiffing 1/1200 ships were on the table and the rules were a set called Trafalgar- which I had never seen before. This last not surprising since it had been a good few years since I had played Napoleonic Naval though it has always interested me off and on over he years- C.S. Forester and Dudley Pope's fault, devil a doubt, with a side order of Alexander Kent  and perhaps a soupcon of Gregory Peck and Virginia Mayo!


However enough of the frivolity and on with the action
The French Squadron facing the stalwart tars of the Royal Navy considered of thee 74s and  the Austerlitz- first rate manned as usual by a lubberly crew- Shaun and Andrew !!  Under my own hand were 2 74s a 64 and Victory - a first rate, I also had the Surprise- frigate 32 which was carrying important despatches and needed to be seen out of harm's way until it could show the French a clean pair of heels  and glory of glories I had the wind !

No it wasn't the beer. I had the weather gauge which  gave me a reasonable and unexpected  advantage in the upcoming contest. I had my four ships in line ahead with the 64 leading ad Victory at the rear shielding the Surprise from the French ships.. With the wind against them the French had something of a task, but of course the wind can change  and we did get a fog  bank which fortunately dissipated before any harm could be done. the opening rounds were fired bu Austerlitz and replied to by my little 64  in a vain attempt to slow Austerlitz down to try to slip Surprize through the gap and away.  This didn't happen - round one to the French .

However despite losing a fore mast the gallant 64 bow raked the Austerlitz twice and since the French first rate also received a stern rake from Colossus 74  she  became a floating wreck - scuppers awash wi' blood. Yes Gentle Reader the odious cubes were actually running my way for a change! Shock Horror - how unusual, but rather nice.

So I hear you ask what were there rest of the French doing all this time. Short answer- trying to turn round against the wind. Not easy indeed mostly impossible especially as the wind stayed steady. Yet despite this there was more for the Royal navy to do. A miscalculation on my part led to Surprise losing a fore mast and later its main to French fire though  it cost the French one of their 74s as Victory - slower than the others(was he bottom foul?) finally came to the rescue and escorted the limping , but still mobile, Surprise away from the action.

I was pretty impressed with the rules- there were bits I didn't grasp which almost led to a fit of pique but Steve explained slowly using nice short words so I got it in the end ! I will happily have another go with these- even if I don't get the wind !

As usual thanks to Landlady Jean for superb Beef butties and chips and to Landlord Eric for Consett Brewery's White Hot - an excellent "session beer"  for convivial toping whilst playing a spendid and different  game.
Ships were all from Steve's collection and are Langton miniatures. Lovely models.
Posted by Big Andy at 04:24 4 comments: 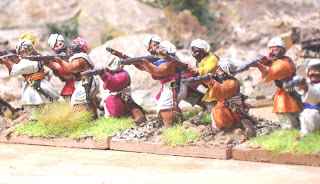 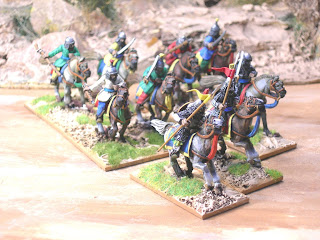 So here are a few pics of the initial results of this line of thought. Some of the cavalry were painted by Dave Jarvis about a decade ago and have been given a reviver.
All the models are Old Glory 25mm - or 28 if you prefer and come either from the Sikh Wars or Indian mutiny ranges. I shall also be using packs from the Renaissance Persian range and  from the later Ottoman Turkish
Wonder where this project will end up?
Posted by Big Andy at 05:23 5 comments:

It has been a while since I actually finished any new models for any of my on going projects. I have had these on my desk for several weeks but actual real life keeps getting in the way.  However finally another whole 8 figures fr the Forces of Napoleon Shinyparte and a single cavalryman for the Duke of Wellyboote. The speed is positively breathtaking ! . Mind you this collection is now knocking on the door of 300 models with plenty more to do - including a bundle of limbers and teams which will take forever so there is plenty of life in it yet. I have also just bought some few Austrian and Russians which may end up doding duty as part of the tiny forces of some ficticious and fractious member of the Confederation of the Rhine. In the same lot were a bundle of Prussians  which only need a bit of touching up before they can take the field.

So with things looking a bit bleak for General Shinyparte I thought I'd finish these voltigeurs and add a few figures to the Guard. As for the Brits well, amongst the various lots I have acquired over the last year or so was a small group of Stadden Hevy Dragoons in the uniform of 1810-11. Some regiments at least had abandoned the  clumsy bicorne and used instead a "watering cap"  or shako . That dress is what the cavalryman depicts. A bit unusual and very attractive so I painted one of the five I have as an Inniskilling Dragoon  just for a bit of difference.

As for the Imperial Guard . I  now have a good bundle of them . both Stadden and Minot with an odd Willie or two (FYI that is a figure brand not an anatomical description)  so many more will turn up . The voltigeurs are all Staddens  Like most of this collection advertised as 30mm when they were made imn the late 1960s.
Now a bit of a rest from shiny chaps. Next on the painting desk some more models for my growing "India" collection.  Once finished they will appear- and thiese are a matt varnisehd collecton. Not everything I do is shiny !
Posted by Big Andy at 04:43 2 comments: