Opens to the strains of YES..... In his estimable Blog - Wargaming for Grown Ups Trebbian poses the question

Well it depends- stories about wargaming often are as I can surely witness..... A good few years ago OGUK used to have a stand at the show in Eindhioven in the Netherlands or this incident may have taken place in Essen Germany- certainly it was not the UK. Some years we'd put on games as well- unusual at the time as we were historically based and not All conquering Workshop junkies. I remember doing Dark Ages, Hundred Years War and WW2 games . After the show the evenings could get a tad convivial. - There should have been a sign saying

On this occasion I found myself cornered in a restaurant by a Dutch Geezer who was boring the arse off me recounting his list of Workshop Victories. My eyes were glazing over, my brain turning to mush. I applied myself to my beer and looked about me in despair and at last gasp caught the eye of my savior. Todd Fisher - he of EHQ- also present- enviegled me into a more historical conversation. Sighs of relief were sighed and later after the meal Todd says to me in pure Chicargoan.


I was in a bar last week at home and caught sight of a biker guy I know sitting there looking deeply pissed. All of a sudden he cuts loose and wrecks the place. Just before he started He had EXACTLY the same look on his face as you had- so I thought I'd better rescue you

Thanks Todd you were not wrong. If you are a a show and see Jim the Painter - say to him

and even after a dozen of so years his face will screw up with distaste. This fellow was to put it mildly a complete tosser. For3 or 4 years we would dread his appearence. He'd demand to open sealed packets then scatter the contents- then ask why stuff weas missing. He'd usually do this at Salute when we had chaps 5 deep at the stand waving wads of cash at us. The last straw was when he demanded- never asked always demanded that I break open 2 packs of latex roads to give him the selection of bits he wanted. Now leaving aside the fact that this buggered up the product for other chaps his manner was so dammned offensive that- at Salute- I 'd had enough. No I didn't rend him limb from limb and dance in his blood- though for a fleeting second that was a possibility, I merely tore his credit card reciept in half and told him to make way for a bloke that wanted to buy stuff and never to darken my sight again. My restraint was admirable.


The other side of the coin.

Salute again. Two Spanish chaps are buying some toys. Both are spending sizable sums for the time. I start to process the first chaps credit card and it's rejected. The Spanish chaps is understandably dismayed. His friend gigglesand in a perfect Speedy Gonzales voice says

And then without a seconds hesitation hands over his own card to pay both bills. That of course is what friends are for.

- possibly my favouite story ABOUT wargamers and their foibles... Evening -after the show my team and I are booked into a Mexican restaurant of our aquaintanve along with our good friend Mike Mc Nally- now an almost famous Osprey author. A couple of chaps- aquaintances of Mikes inveigke their way into the company. In my memeory they are both Thirtysomethings overweight and bespectacled with the definite look of the- to use a splendid Americanism

about them. So there we are in this eatery when I and Mike notice on a nearby table several Toothsome females of the species- proper eye candy forsooth!- Phoarr - may have been uttered- were enoying a meal . One- a Blonde as I recall in a fetching LBD- is ,to coin a phrase, having trouble with her puppies. It's pretty obvious to Mike and myself that they need restaint. Jim - with his back to the action curses under his breath, eyeing us balefully. Finally the young lady succeeds in wrestling them more or less back into harness and I take a moment to look and listen elswhere and am shocked- not to say aghast ! While all the monumental events has been proceeding these tow wothies - despite the fact that they had at least as good a view as I, had I realised, continued the conversation I had noticed out of the "corner of my ear" . What you may ask was this about- eye candy? Blondes? Sassanid heavy Cavlary.. A games a game lads but sometimes.... Jeez...
Posted by Big Andy at 05:21 No comments:

For those of us of a certain age and diposition the current continuing trend towards eye candy above all is at best lightweight at worst mind numbing. Rows of minor Z list celebrities with enhanced silicon knockers parade before us with the glassy eyed stare of the truly vacant (and that's just the blokes) . We are told that a picture is worth a thousand words and so it might be if your vocabulary is that of a ten year old - and a retarded 10 year old at that. No I'm afraid there are times when I'm reminded of the old fella who upon seeing TV for the first time opined that he preferred radio as the pictures were better. In Wargaming terms- we are supposed to OOH and Ah over the magazine eye candy and because we bask in its magnificence entirly miss the fact that the intellectual content is nil or less. These pictures are meant to inspire us. Gawdamighty!! Mind you at least the pictures are usually respectable. I have before me the book "The Wargame" edited by Peter Young published in 1972. It contains chapters by Young Grant, Featherstone , Chandler etc - all the Wargaming Luminaries of the day on famous battles Austerlitz, Gettysburg Agincourt- 10 battles in all and -with a few exceptions- the photographs of the wargames are horrible- even by the standards of the time they are at best average. The written narratives are fine enough- tasters for those interested but inexperienced if you like and on that level the book succeeds. Its succeeds with the stories it tells rather than the mediocre pictures it shows. The writing is far better than the eye candy. Wheras now the reverse is often the case which is a shame. While I am far from averse to a bit of eye candy whether it be in the wargames arena or otherwise it should never dominate, surely the story is the thing, every picture might indeed tell a story but the caption is always worth reading- or at least should be. Are we no longer capable of using our imaginations to conjure the pictures we need?. Or do modern publishers think we must be patronised or are too thick for long words.... The pictures should add to the story not BE the story.
Posted by Big Andy at 08:09 6 comments:

I've finally got around to doing some infantry to go with those tasty Charlie 1s I did a month or so back. I have even kind of sorted out an organisation. each stand will - depending upon game level represent either a platoon or a section so a base unit will be 4 stands ie Platoon HQ and 3 sections or Company HQ and 3 platoons. HQ stands or "Command stands" in CD ese will have less firepower. At the company level a "Weapons stand" can be added at platoon level such are more likley to be in the Fire Support Group. 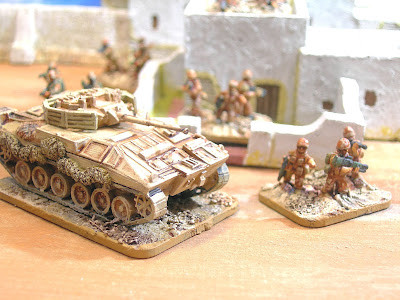 The next show British troops patrolling the streets of Ghob City in southern Harraq sometime in 2003 (What I hear you cry is this a fictional country- well yes sort of but NEVER an imagi-nation -abominable term) Harraq is of course to the south of R'hagidistan....... 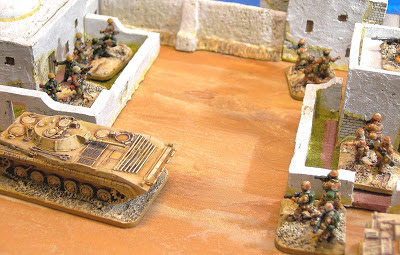 A small firefight between the British and Harraqi Republican Guards. 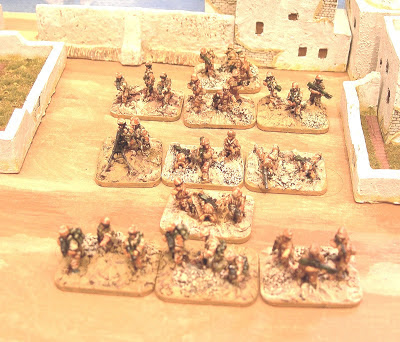 More British troops . Two companies with most of "Support Company" - which still needs a command stand and an 81mm Mortar stand and probably a sniper stand when I work out how that will fit into the higher level game. In theory the battles in "Harraq" will have tanks APC's Helcopters the lot using Orbats taken from CPQ and similar."Harraq" will be a tougher nut to crack than its erstwhile origonal of that I'm sure.
Posted by Big Andy at 07:12 2 comments: