The Battle of Theakstons Folly. 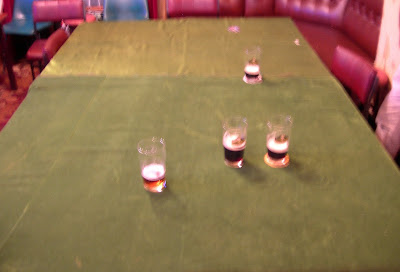 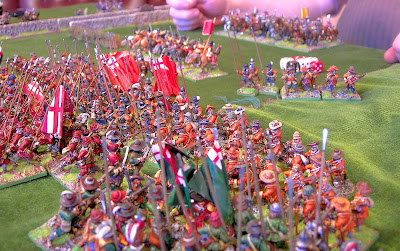 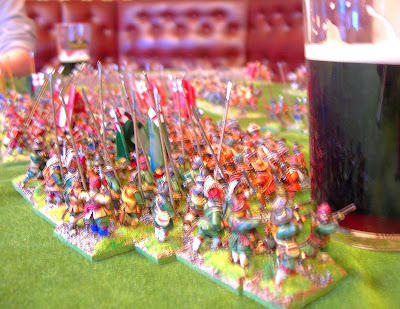 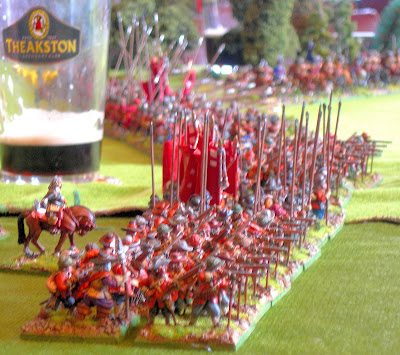 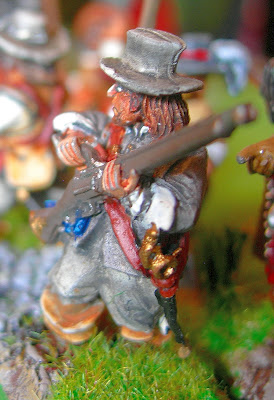 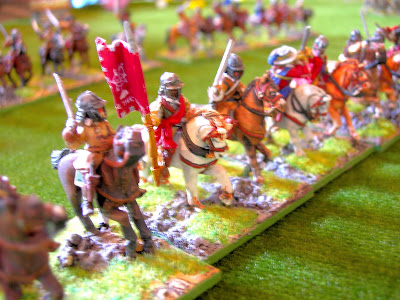 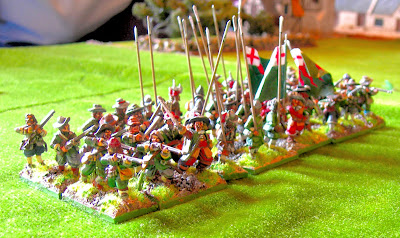 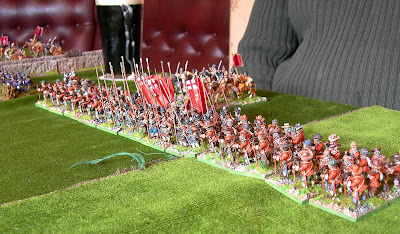 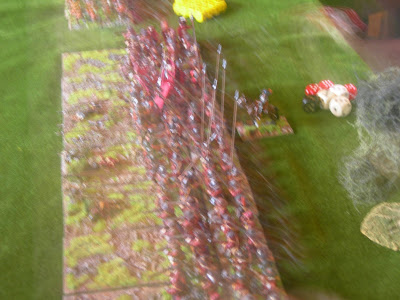 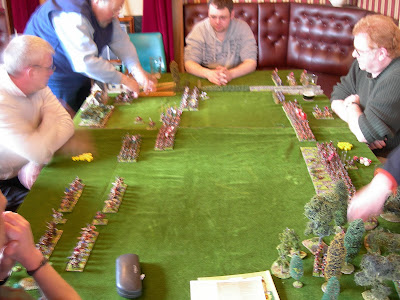 So Here we go my first battle report on this blog.
Settle back and transport yourself in your minds eye to the summer of 1643 - somwhere in middle England.
Major Genral Harbottle Grimstone of Parliaments Associated counties of Rutshire Loamshire and Trumptonshire has a problem his army is confronted by a Royalist force which heavily outnumbers him in horse and while their foot are neither as numerous as his own or as well equipped they are far from insignificent with 3 regiements totalling 150 figures Their Horse are in 8 troops toalling 72 figures whil hes can muster a bare 34. The Major Generals pride and Joy are his two regiements of foot The Lord Generals at 96 figures and Col. Denzil Holles at 94 together with commanded companies of Shot from Lord Brookes regt and Col. James Wardlaws Dragoons should enable the Major- General to hold off the Royalist forces- always provides he can contain those masses of Cavalry.
The first picture shows the action around move2 with the Royalists on theleft of the pic. slowy feeling their way forward - their 3 infantry units trying to bully and overawe the Lord Generals Orange- Tawney coated splendour.
To begin with the Royalists were cautios seemingly scared of the 2 Parliamentarian foot units in the centre. Wardlaws dragoons occupied Nutters Copse- bottom right of the pic - and remained there holding Parliaments left flank. On their right thir Horse- including a troop of Cuirassiers hung back to await opportunities.
The first Royalist assualt came from their foot upon the Lord General regiment2 charges were declared but a resounding volley or two from the Roundhead halted the Royaslist foot in tis tracksand The Kings lifguard of Foot and Sir William Pennymans regt began a slow withdrawal to reform.- The presence of Royalist horse precluded any roundhead follow up. .
The next 2 pictures show the 2 roundhead foot regiements in all their glory Large units like this take work but are well worth the effort. Even the 40 figs plus royalist units look fine- Large units can adopt more realistic formations.
On the Roundhead left Flank Col Charles Gerard decided to launch his royalist horse at Wardlaws Dragoons the first charge went in and was promptly shot to bits at point blank range by the Dragoons Col. Gerard was not pleased- he applied himself to his ale muttering the while....
Meanwhile- now about move 8 or so - the Royaluist launched a neck or nothing charge against Lord Brookes commanded shot behind their hedge on the roundhead right - some truly awful dice caused the roundheads to panic and conquently hedge or not they were cut to pieces by the Royalist Horse- who then Cavalier - like pursued the remnabt off the field in thier turn pusued by a single troop of Parliamentarian Horse.
The cris was now approaching . Roundhead cavalry - finally moving forward on the right were at first checked but finally narrowly victoriuos - capturing a standard of the Earl of carnarvon Horse but suffering lossesin the process. In the centre the 2 foot regiements began to advance while on the left Gerard - putting down his pint- launched another charge against the Dragoons which never really got off the ground. Gerard went back to his beer....
In the centre the now reformed Royalist foot were on the move Drums beating and Colours flying this advance meant business. A short firefight and finally all 3 albeit reduced- Royalist Foot units charged the Lord Generals Foot Almost simultaneously Gerard tried again - THIRD time lucky Wardlaws Dragoons finally gave way and scattered into the deths of the wood pusued by the finally victoious Royalists.
Thenext 2 pictures in the sequence show Gerard- red Cavalry Cornet- finally mounting his charge and a muttering soldier of Wardlaws thinking - "Time I was home".
The end was now fast approaching The Lord Genrals regiment was still resiting mostly due to some truly average dice throwing on both sides but the returning Royalist horse- although they had taken their own sweet time would even in their reduced state be enough to ensure a narrow victory for the King.
The final 4 pictures show the progress of the last struggle between the rival infantries- The fighting for the Pints of Theakstons was both prolonged and vicious - cries "Ya Basta! its yer round " and "Mines a pint " could be heard from the depths of the melee!!
The final picture shows the battlefield afrer all toys are back in their boxes ready for home.
A few technical points. Rules used were forlorn hope - for my money the best for the ecw and not half bad for the Thirty years war - with a biy of fiddling- there were a total of 8 player- including gentle reader the Umpire- my humble self- and the game laste about 4 and a half hours- including a lunvch break for hot beef butties as well as time for meansering scurrilous and highly humourous coversations that are mostly unprintable. All figure were from the Old Glory 25mm ECW range again IMHO the best and most complete of the modern ECW ranges out there- and yes I'm biased but they do look good on the table.
Doubltless in the fullness- especially when I get more units painted these armies will be at it agsain.
Andy
Posted by Big Andy at 03:10 6 comments: