When is a game Not a Game?

So there we were in a new venue for the first game this year. 3 of us managed to get past work and real life commitments to try to get a game in. I was in the chair so decided to give my small Sikh Wars forces their first outing together with some new jungly bits I had amassed during lockdown. I actually bought most of them in one lot off ebay but a few bits were made by my own fair hands as well.

Now being a new venue there was a bit of delay sorting ourselves out and of course none of us had seen each other face to face for some months so the craic was  perhaps a tad OTT nevertheless we got the game set up - the scenario being vaguely based upon the Battle of Mudki in 1845..

Rules were to be Black Powder - Second Edition-  which while an definite improvement on the first edition still has issues- most notably  the brown print on the off white paper which makes some bits a bugger to read in certain lights. There is also the serious faff involved in sorting out the units which I ran out of time to do - having a real life- though the idea here is fine as the units can be tailored to the scenario. For a large game with multiple brigades this could take a considerable amount of time but may appeal to the sort of chaps who regularly sort out their sock drawer in colour or alphabetical order. Most of course will take the Holy Writ of the 'game designer' for granted - even if he is talking twaddle- since that seems to be the 'received wisdom' there days 'finkin ain't Fun' for some at least.

So on second thoughts maybe I'll have to learn to organise my sock drawer, at least metaphorically speaking, rather than merely accept some of the historical howlers that appear in the sample armies for the scenarios in the book . There is still good stuff in the book even if much of it is hidden amongst a plethora of eye-candy and other associated fluff. 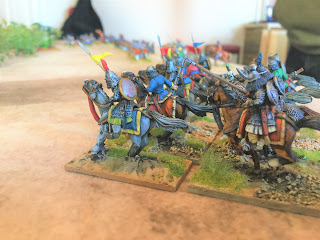 So to the game ... or rather not as with all the chat and ribaldry we only did three moves. Mind you - despite the seam in the playing cloth I did rather like the look of the thing and as I get more 'India' models painted - both for the Sikh wars and of course De Boigne's campaigns there will be more spiritual visits to the warfare of that intriguing subcontinent.

Models were mostly Old Glory 28mm - though one of the sepoy units is Foundry and the Bengal Horse Artillery are old Willie 30mm. All  blend in pretty well on the table so 3mm angst can go whistle. Check out the photos  you simply can't tell.

So to answer my title question .....  when its a good time with your mates .

Our thanks to Norman Oyston| (that's Andrew the Tekkies Dad)   for allowing us the use of the  new venue- we will be back.

Catching Up on My Reading 10

Another late17th century title came to my attention - from Helion naturally-  this one being Andrew Abrams latest . concerning the English occupation of Tangier during the reign of Charles II.

Now unlike the last book I reviewed concerning the Late 17th century this one is no lightweight gallop through the period, and of course is all the better for that. After all  not all of us HAVE to be assumed to have the intellectual capabilities of a backward haddock surely?

No this one is for chaps who don't need to use their fingers for the long words. Mr Abram can read and write- no mean feat these days, and it shows in the 200 plus pages of. hard information within these covers .

The English Garrison of Tangier - Charles II 's colonial venture in the Mediterranean 1661-1684, tells you exactly what it is about right from the first page. 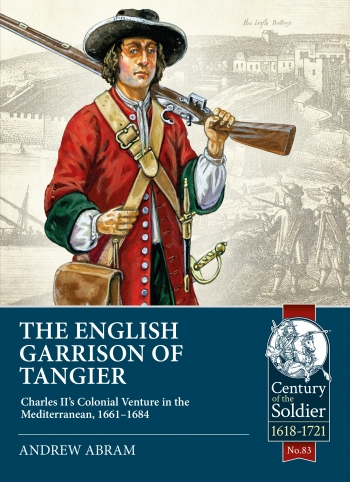 The depth of research is excellent in 12 chapters plus 10 appendices Mr. Abram gives us a picture of Charles II's  small restoration army and it's first colonial adventure.  The 9 page bibliography gives us a hint of where all the information comes from.

Tangier came to Charles 11 as part of his dowry  from his new Catherine of Braganza - his new Portuguese wife- Bombay came to be a colonial possession  by the same route  but that is another story. The plan for Tangier was to make it a trading hub  and entree into the hinterland ... but the local population were not that keen to say the least.

So Charles II was saddled with an outpost which needed a small army to keep it safe or indeed  often not so safe.

The book give us some serious detail on the garrisonand a good amount on it's Moorish opponents.. There are, for example, 54  tables giving establishments , officers names , rates of pay and provisioning details type of guns in the various forts, all the information one might need to run a brigade sized 17th century army. should you wish to do so.

As you might expect there is a fair amount of info on 17th century logistics peculiar to the Tangier Garrison but there is also a  detailed narrative  of the various actions fought by the garrison against the  Moorish  forces and the reader quite quickly realises that Tangier was a dangerous place, if the Moors didn't get you then disease, bad food and too much alcohol might.

Abram makes it quite clear that Tangier was no easy posting and that conditions were often grim, the garrison was frequently ignored by the home government and often held on only by the skin of its teeth and because the Moors often had their own political turmoil.

The book is profusely illustrated in black and white with copies of contemporary illustrations and pamphlets. there are also form very fine maps. One small niggle- although the Garrison's uniforms are described, as is the dress of their Moorish opponents  it would have been nice to have some modern artwork to put these descriptions into context. This being especially true of the Moors.   However that does not really detract from the overall worth of the meaty 380 pages in this excellent volume.

There are sufficient battles, actions and skirmishes here  to fascinate and wargamer what wants something out of the usual rut but this book is much more than  that with its depth of detail and strong narrative . For those interested in the early history of the British army it is a mine of useful information.