The Battle of Schortenhausen May 4th 1708

One of the problems that arises in the running of any small business in almost any field is lack of time. The demands of Government bullshit override almost anything. They have the power - you don't . This is a universal constant. However add "somewhat busier than normal" and 2 shows in following weekend AND  the arrival of a 10 box shipment from the USA which had to be broken down and sorted  before Partizan and you might just see why I have been neglecting this blog a little of late. What follows was mostly written  the week before Carronade.  but only just this morning finished.


There were plenty of T.W.A.T.S.  in evidence at our rather rushed May meeting. A total of 6 members turned up for the dress rehearsal of our Durham demo game. Jim the Builder was in the chair and running a 15mm Marlburian game using modified "Warfare in the Age of Reason" rules. There were a total of 5 players plus Jim as officiating Umpire so that made half a dozen T,W,A,T,S, in the same place quite an achievement given some recent turnouts.

This was the first outing for the 15mm Marlburians and between us Jim and I managed a total of 28 units- so 14 a side for this dry run. Jim has several other units on the go  so by the time of the demo in June the forces will be significantly larger.. As for my tiny contribution well- That would be 7 units in total plus some command bases,2  Bavarian Infantry Battalions 3 Bavarian Cavalry squadrons an a battery of 3 Bavarian guns. The single British Battalion I had joined the other side along with 2 commander bases. One British and one Dutch.
So the terrain was set before us and with myself and floating Jeffon one side and Mechanical Shaun Liam and his brother Jake on the other, we were off to the early 18th century.


The Anglo- Dutch forces began by an advance in the centre of an infantry Brigade of 2 battalions which immediately came under serious artillery fire from both French and Bavarian batteries. On the Franco Bavarian right  we occupied the village with a battalion with  another ouside in support who were in turn supported by Bavarian Dragoons, Our center - composed of French and Bavarian cavalry  hung back - awaiting events on our left the French foot moved steadily into line.4 battalions up, 1 in reserve. We sat back awaiting events and continuing our bombardment of the somewhat isolated Anglo- Dutch centre. However on the Franco,Bavarian left  a series of savage attacks threatened to overrun the position forcing the Bavarian Dragoons into a somewhat precipitate charge and chasing a Bavarian infantry battalion into the village for shelter. Nevertheless  the village position did its job , soaking up enemy pressure and troops which would have been better used  in the centre.


In response the  French Cavalry and Bavarian Cuirassiers  moved forward. The cuirassiers charged into the infantry opposite them and a long fight ensued- bum dice on both sides- before the infantry finally broke. They had been weakened by artillery fire first or the charge would probably not have succeeded. French cavalry - led by Elector Max in person  then charged in support of his cuirassiers  pushing back and eventually breaking the Dutch cavalry opposite them. This charge gave the pressured Bavarian Dragoons to the right time to rally and- although much reduced  finally polish off thee weakened and battered allied foot facing them.


Meanwhile on the Franco- Bavarian left the French foot advanced in a slow and deliberate manner threatened as they were by significant enemy cavalry formations. When the charges came in  the situation looked dicey for a while but floating Jeff managed his usual ridiculous dice rolls at the appropriate time and despite the rout of a French battalion Jeff hung on and the Anglo- Dutch - in disarray with 5 units at least in rout and others looking distinctly shaky  conceded the day.


Models were- as you might expect- all Blue Moon 15mm from the extensive Marlburian range. Beer was by Consett Brewery and Beef butties by Landlady Jean. Next months game will be the demo at the Durham show on June 8th. If you are  planning to go and want and order bringing then as usual email me on info@oldgloryuk.com and I will sort it out for you.

As always our thanks go to Landlady Jean for here hospitality. We will be back.

A little bit here and there.

We have been very busy of late  so that not a great deal of painting has been done. Stuff that was on my table before Salute is still there. Now  I am not , and have never been, one of those wargamery types who can start at one end of an army and finish at the other without food or sleep or a pint or any normal comfort . Chaps like that make me nervous, obsessive aren't they? Sometimes  bit self- righteous perhaps ? Anyhow I ain't one of THOSE boredom would kicj in far too soon. No I apint what I want when I want and enjoy the process at least s much as the results 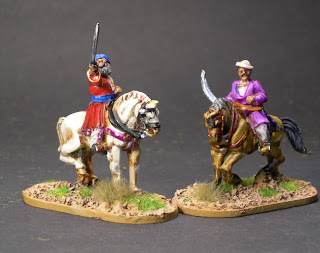 So recently I have bitted about a little more than usual. Some 15mm Marlburian High command  for our groups game at the Durham show in June.  A40mm drummer for Regiment Champagne  for the very slowly growing 40mm TYW project . and finally these two little beauties. Command figures for the Indian Mutiny project. Both of these are from the Mutineer high command set and to be honest I am not sure who is who- though they do come with name labels on the figure and  another as yet unfinished is definitely  Lakshmi Bhai - The Rani of Jhansi as the figure is obviously female.
Painting these two was a  treat in acrylics and inks over a white base coat to make the colours pop a little. They are added to the slowly growing force of Mutineers - or  Freedom fighters if you prefer.  To take on the forces of John Company 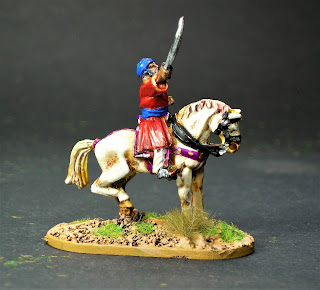 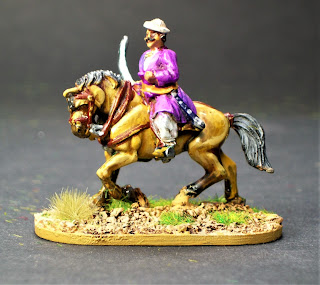 All of my Indian Mutiny forces are from the Old Glory  range and once hey are table ready I plan  to use a hybrid of Charge! and The Sword and the Flame which -at least in theory- should give the right mixture of order and sudden unpredictability.