I've had a small collection of 40mm models for the later 30 Years War for some time but I could never quite decide what to od with them.  The problems were all of my own making.
I used my own Romanoff miniatures casting together with some Sash and Saber and Drabant pieces  but was never consistent in what I actually built or painted. There were bits of all sorts. Bavarian French Scots Danes and the odd Spaniard, as well as models that were really ECW. Also I could not make my mind up about basing. The earlier models were on 25mm square for foot , the newer on 25mm round for use with sabots. Rules had not been thoght about except for a vague idea to use a variant of Young and Lawford's Charge! from the 1960s as an antidote to the  points based faff and organisational twaddle that is Pikemans Lament. A variant on Forlorn Hope was also a possibility but I wanted to game smaller actions  rather than full dress battles and I was daft enough to think PL would do the deed.  Well I got that wrong so the project went to the back of the shelf for a while even though I liked painting the models and completed to odd few here and there as the mood took me.
I will probably still have to repaint a few Officers Sashes but finally I begin to have some actual units. What I actually fancy are the early campaigns of Marshall Turenne against the Spanish and Bavarians  and possibly the War of the Fronde in the early 1650s.  Lots of scope for small actions around sieges  and suchlike.  Also quite a few of the troops are pretty interchangeable.
As for rules well - still a bit of a problem but nothing that can't be solved. Using Featherstone ECW rules as basis  but adding some command rules  might serve but I will need to test the theory as is using a Charge variant . What I don't want is the same old same old just because it is popular - indeed rather the opposite.
So here are pictures of a reinforced rebased and revamped Regiment Champagne chosen because my wife and I like Champagne and always have a bottle or three about the place. Next regiment for the French will be Picardy - with  some of the Queens Cavalry on the go as well.
Posted by Big Andy at 06:33 No comments:

This has been a long time coming. Half of these Lancers have been on my painting table for over a month. But while other fellows have been enjoying themselves painting away during the lockdown I have been sending out  lots of soldiers so they can paint them. This has left surprisingly little time to actually paint any of my own.
Nevertheless I have managed a bit here and there. A few sepoys for the Sikh Wars project and these fellows.
Well half of them anyway.
Most are Stadden 30mm with a single Willie (stop giggling at the back there !) while the Trumpeter is an old Minifig 30mm on a refurbished Willie horse. The poor creature needed a new tail  which was provided by a broken Old Glory horse from my spares box.
As regular readers will have gathered these are going into the "Shinyloo" "retro" collection and when possible will be used along with "Charge!" rules for smallish Napoleonic games.
The whole idea of this project has always been a sort of pastiche  of and homage to wargaming in the 1960s and 70s. Back in the 1970s when I started, I may have ogled and lusted after Stadden and Willie 30mm but simply could not afford the price tag. Even 25mm metal in any quantity being beyond my pocket  until the late 1970s. Back then 30mm were usually  3 times the price of  the then 25mm (28mm being an invention of the mid 1990s of course) so it was not until   comparatively recently that I managed to amass a decent collection of these models- most bought secondhand and some in shocking condition , picked up at shows initially  and more recently on ebay. 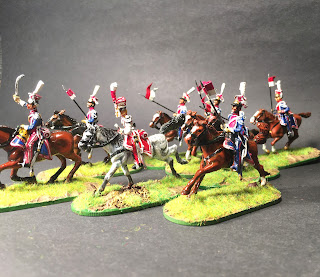 So these Lancers and the Minifigs General (who although painted as French may not be so but since he arrived French albeit battered  I thought it better for him to stay French ) will join the forces of Napoleon Shinyparte to hopefully once again try conclusions with the Duke of Wellyboot across the tabe in my groups local pub...... Not today though.  The whole look is deliberately retro even to using retro style scenery where I can- old Britians and Merit Trees for example with some even older- but refurbished Britians farm haystacks and Johillco metal hedges
Posted by Big Andy at 07:27 7 comments: