So blag posts have been thin on the ground lately  but like buses(anyone remember them)  there are none for ages the 2 come along at once.

The photos are of my latest rather small unit for "Shinyloo" my retro Napoleonic mostly  30mm collection. These aged chaps are from Barry Minot who made a good bundle of assorted 30mm Historicals in the 70s and 80s. These days  some are a bit thin on the ground - which is why this unit is only a dozen strong. I have a couple more of the figures but they need some TLC and repair before I start painting them.

I do now have quite a bundle of Minot Napoleonics. Some splendid French Cuirassiers and a fair number of British Infantry and French Imperial Guard but of course most of them need painting. Earlier "Shinyloo" posts show those I have actually finished - both Minot and other makes.

The "Shinyloo " collection is now in sight of 400 individual  models- not quite there yet but I can see it from here. Still  plenty to paint though.
Posted by Big Andy at 03:38 5 comments:

Catching Up On My Reading 5

Now as a general rule I hate reading wargames rules. The deliberately difficult language supposedly designed to stop players cheating added to often silly acronyms which have nothing to do with the period in question, but make the "game designer" feel clever (what are PIP, MU's and Fast Knights anyway and why the hell should I care?), make toiling through the average set of rules only fun to those who arrange their socks in numerical order and find half a shandy the epitome of excitement.

So  it may come as something of a surprise to see this review of a set of rules from  the Helion stable that does not follow that well worn and oft repeated path.

In these strange time reading is about all I can do with them anyway  but suffice it to say - Gentle Reader- that  once you can get to a wargames table they should also play pretty well too.

For the record the rules are for large, fast playing, 17th century battles in the smaller scales- so 15mm and below- and to my mind should do that very well. To me there are a few distant echoes of a 1980s-90s big battle set called Volley and Bayonet - which back then I played quite a bit of and enjoyed. In Deo Veritas being focused on the 17th century of course have significant differences but there are still echoes in the base sizes but the writer does acknowledge his debt to that ruleset and its writer Frank Chadwick.

Using this set it becomes possible to refight such large 17th century battles as Lutzen and Marston Moor- that latter being one of 6 historical scenarios included in the book.  The accent is on the history- although for the gamey types there is a points system if you must.

All the appropriate troop types are there from Spanish Tercios to late 17th century regiments, concentrating on Western style forces. I suspect a supplement might be needed to cover the Ottomans and the Poles and the Muskovites for example though with a bit of thought many  if not all of their particular troops could be organised or this game system. The accent here is definitely on "big picture" rather than regimental detail but that is as it should be for a "big battle" set such as these

Physically the book is up to the usual Helion standard though I could have wished for some captions on some of the eye-candy photos. However at about half the price of some of the hardback  paving slab sized rulesbooks you see about the place this softback is good value.

My preferred option here would be for the 30 Years War in 10mm  and for that or the ECW or for much of the 80 Years War and a decent chunk of the various Northern Wars these would fit the bill.

Definitely recommended .... Now all I need to do is to get Jim to paint up a bundle of 10mm TYW troops ... well I do have most of the troop types in the Old Glory 10mm range so it might be rude not to/ ..... 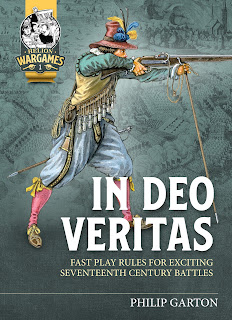