In between writing and selling soldiers I am actually getting a little painting done. Never as much as I'd like but then you never do really.  The fruits of the last couple of weeks appear in the pictures.

The Kala-Paga are the elite Maratha cavalry - several steps up from the Pindaris and suchlike that the bulk of their cavalry often consisted of and that the British were so disparaging about. No, these chaps  were the paid(in theory) more or less 'regular' cavalry of Maratha armies. Much better armed and equipped than most and able to fight as 'battle' cavalry as well as raid in the 'gaminia Kava' style of normal Maratha warfare. There were never that many of them and ten percent of Maratha cavalry is possibly a bit generous. I've given this first bunch the 'national flag' of the Marathas the saffron yellow carried from the time of Sivaji the Great if not earlier. 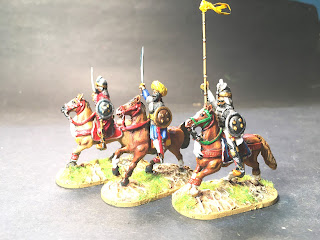 Sikh Akhalis, warriors for their faith. These chaps fought Mughals, Marathas and indeed anyone else including the British. The British first encountering them in a skirmish in 1809.

British Infantry of the Sikh Wars period. These are the 31st Foot. Command and Flank companies still to finish. But we are getting there.

Email ThisBlogThis!Share to TwitterShare to FacebookShare to Pinterest
Labels: India, Painting and modelling