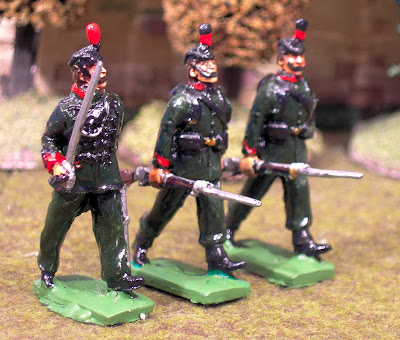 As ever these things take longer than you'd like but I now have a second release in the "Glorious Victorian Toy Soldiers" range. These new figures cover the Rifle and Fusilier regiemts of the British Army . Now I've always had a soft spot for the Green jacket- especially when it carries the red distinctions of the KRRC( my Dad was a rifleman in the early 60s in the 2nd Green Jackets - The KRRC ) or the 60th Rifles - depending upon date. Now thanks to Sean Bean and Sharpe the 95th get the glory but the 5th Bn 60th had rifles first- not by a long time its true- about 3 years or so but first nevertheless and definitely senior in the line - 60th against 95th until both regiments were taken out of the line to become the Kings Royal Rifle Corps and the Rifle Brigade respectivly. Despite the perfectly normal interegiemental rivalry both regiments and thier modern successoors- The Rifles speak for themselves and in the case of the 60th starts in the French and Indain War in the mid- 18th century and continues in Afghanistan today seeing on the way such diverse fields as Talvera , Albuhera, Delhi Ridge , Spion Kop the Somme Calais etc etc etc By Gum you may say the lads have been about a bit and just like the rst of our Armed services so they have.
So here are the rifles available in both helmet and busby - paintable as either KRRC or Rifle Brigade- and doubtless as RIR and possibly Canadians too .
In addition you can now also get the Fusilier regiements or at least the non-scottish ones- I plan Scots in the future. so the British Army marches on in toy form as by God we hope it continues to do despite the actions of its enemies- mostly those in Parliament .
Andy
Posted by Big Andy at 02:32