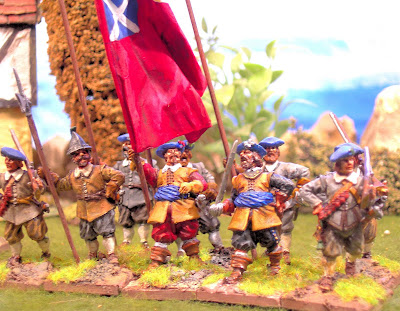 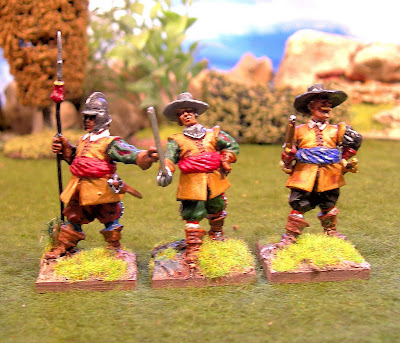 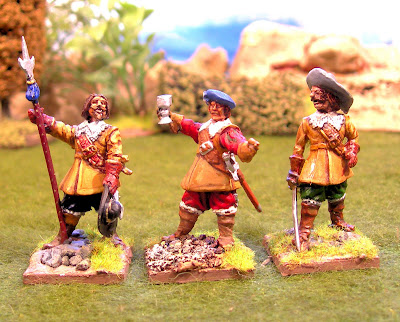 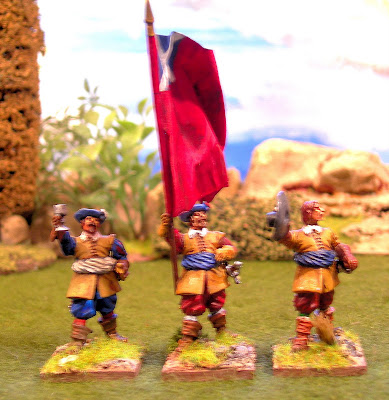 Now all in all despite my butterfly habits when it comes to wargaming and model soldiers I do seem to keep coming back to the 17th century. I have largish ECW armies in 25/28mm(take your pick they are of course the same). Ealier posts will show you at least one of the battles- see Battle of Theakstons Folly.
I suppose it's what comes of sapending 10 years as an ECW re-enactor but the period has always been one of my favourites not just ECW but the Thirty years War too- especially the involvment of English Scots and Irish Mercenaries. So here we see the first of my "Munroe's Regiment" in 40mm - equally it could be Mackays since the latter became the former. In Danish and then Swedish service until the 1630s there is even a little evidence to suggest that the remnants ended up in Ireland- certainly Robert Munroe did- in the army defeated at Benburb by another Mercenary come home Owen Roe O'Niell - who had fought for the Spanish..
There was a lot of that in those far off times. Professional soldiers following the Drum across Europe. ECW Generals Waller and Hopton both fought in Bohemeia and the Earl of Essex fought for the Dutch. Lesser names fought in Poland Saxony and all across Germany. The Scots especially providing troops and Officers for Swedish, Danish, Moskovite and Polish and Dutch armies- but especially Swedish.
So thinking upon these variations the next 3 pictures show officers of various armies of the later 30 years War period- most of whom would be equally at home in ECW armies. All are 40mm and like Munroes they are made from a variety of parts. Mostly Romanoff but with Sash and Saber heads or jacdaw with Romanoff heads . The parts are all pretty interchangeable /. They were designed that way. I wanted the interchangeability. - this would be a pain in 25mm but the bits are big enough to get your fingers round in 40mm .
sculptors do this sort of stuff all the time- small variations in a basic figure. Some charge the bloody earth for it too . I've been quoted £40.00 for a simple arm variant- about 15 minutes work according to the lad who got the job- and DIDN'T charge anything like that.. Some sculptors are just taking the **** but if you are daft enough to pay then fine. However there are plenty of lads out there who do a good job for a fair price so you takes your pick...
Posted by Big Andy at 08:42