Bit busy at Salute but did pick up one very useful little tome from Helion.. "In the Emperors Service by Laurence Spring is an examination of Wallenstein's Imperial Army of the Thirty Years War.  Now anyone who has read even one book on the 30 years war will have heard of Albrecht Von Waldstien- usually Wallenstein and the army he raised for Imperial service. This new volume gives us  some details added to the bare bones that many of us already think we know.  I have other work by Spring and this is well up to the standard of research and scholarship that I have come to appreciate from his work on the English Civil War. 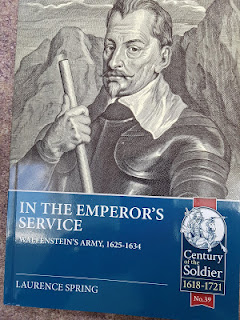 This new book covers "all the usual suspects" - organisation , pay  officers and men , arms and armour very well. It also gives us details of the Siege of Stralsund and the Battle of Lutzen to give us an idea of the army on operation service. There are plenty of photographs and a good slew of contemporary illustrations. I found the photos of captured Imperial flags especially useful especially when coupled with the colour plates of colours and standards. I can feel an addition to my small Thirty years War collection of 40mm models coming up over the horizon.
I would certainly recommend this volume to anyone who has even a passing interest in the armies and operations of the Seventeenth century  in general and the 30 Years War in particular. 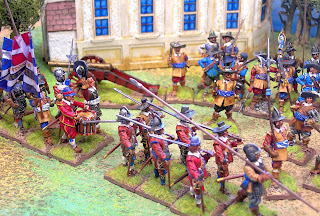 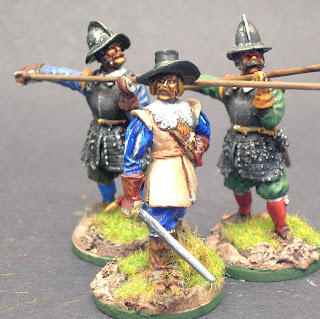 The photos show a few of my finished 40mm Thirty Years War models. Castings are by Sash and Saber and my own Romanoff Miniatures. Armed with this new book from Helion I can now sort out the organisations an flags for these models !
Posted by Big Andy at 01:46