Catching up on my reading 4

One of the several downsides of being a relatively studious chap in today's whiz-bang -kapow world is that so much  of the wargames reading on offer is pretty lightweight. It is one of the reasons I don't often read wargames magazines any more - unless I find something in them to engage my brain. Now this does happen as there is sometimes still good stuff in their pages but so often the articles simply do  not interest me, being yet another scenario for a "game" I've never heard of and would not want to use anyway or perhaps a how to paint- this extremely expensive collection of assorted thingys wiv pointy ears or overly large ray guns, or even if historically based frequently merely a scenario for yet another skirmish game with little or no reference to the historical sources.

So it my come as no surprise that my reading is somewhat more "in depth" than most magazines can(or indeed would want) to provide. These glossy journals being at the shallower end of the  pond so to speak.

Now currently I'm chewing my way through William Dalrymple's "The Anarchy" - which being Dalrymple is a meaty tome indeed in size much like his "White Mughals" and "The return of the King" and equally being Dalrymple concerning an Indian Subject. This time the rise of the East India Company from its comparatively humble beginnings in the 17thcentury to being  overlord of the Indian subcontinent by the  first decades of the 19th.  Shortly put and with massive over simplification the EIC stepped into the vacuum left by the crumbling of the Mughal Empire throughout the 18th century. There were plenty of bumps in the road  but that is essentially the main thrust of the narrative.  This is a subject close to my heart as Indian military history is definitely one of my "things". However this is not a purely military book but puts the battles, sieges and assorted political skulduggery into context. Therein lies its value, context is everything-otherwise there is little point to the battles we (or at least some of us) study.

Definitely recommended for anyone interested in the wars of India. 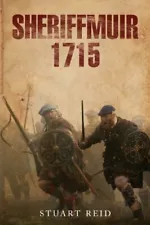 Next up is Stuart Reid's Sheriffmuir 1715. Now this is a more military study as you would expect from Reid. Now it is a long way from the heat and dust of 18th century India to the rain and cold of 18th century Scotland  but that merely goes to show how wide my taste in history goes. Once again however this is a book which puts the Jacobite Rising of 1715 into its political context as well as giving us a fine breakdown of the armies involved in the campaign. I've actually had this one a few months and like most of Reid's books it is a good read (sorry !!). Stuart knows his stuff and since I have a Highland army in the throes of rebasing.......

Again recommended.- especially if you can find a cheap one.

As it happens I also have Jonathan Otes's book on the same campaign - but I have not read it yet . India was in the minds eys much warmer than Scotland so after Reid I went with Dalrymple.....