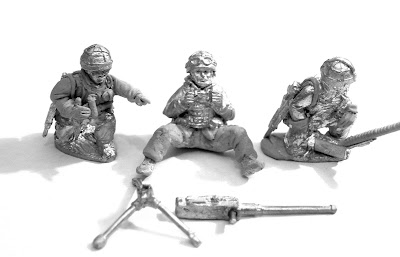 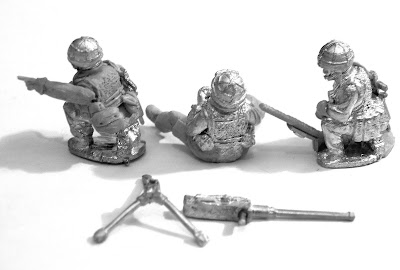 Just arrived this morning from one of my sculptors is the British 50cal and crew for the Brooks miniatures 28mm Modern range . Following not very fast on the heels of the ANA packs relased ealier this year- or was it late last year time flies when you are having fun- these add to the Brooks miniatures range.
My own interest in post WW2 and modern warfare means that both the 28mm Brooks range and the "CDMODS" in 15mm will continue to grow. Not only that but watch the Firforce 15 label for more intresting stuff as soon as another sculptor has finished his current project..
The pictures show the 50cal team in both Front and rear views- made as black and white images simply becase they are clearer on the "greens" . I'll have these moulded up and in production as soon as maybe.
Posted by Big Andy at 04:34