Contingent upon being finished in time

My next gig so to speak is the Durham show on June 10th. Now Old Glory UK don't trade there as there simply isn't any space and frankly the show - whilst very enjoyable is just too small. So as we have done for the past several years we- that is the Tantobie Warfare and Tactical Society- will be running a demo game.
Unlike many other demo crews around the country we will be running a different game from last year. if you recall last year Jim the Builder ran a 10mm Seven years War battle with over 2000 little 10mm dudes on the table.
Indeed as I try to recall the games we have run at this show in the past I get quite a list of different periods and sixes.
Off the top of my head I recall
40mm American Civil War-possibly twice 2 different games including one where I deliberately changed the rules every few moves and made the players change sides.
28mm English Civil War
10mm Seven Years War- twice 2 different games
1/600th Russo- Japanese War naval.
28mm War of Austrian Succession.
15mm Modern- "not the Gulf War at all".
and this year
40mm Wars of the Roses
Many but possibly not all of the games are recorded somewhere on this blog - which is now longer than Ben Hur and War and Peace put together- now THAT is a truly scary thought! 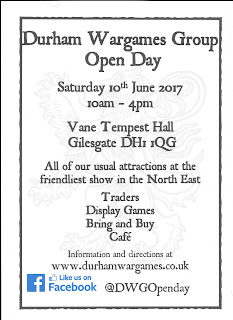 Not bad for a group that currently only has half-a dozen members and has never reached double figures-well not for very long . If pressed we could probably add 15mm WW2- in at least 2 different theatres and maybe 20mm Cold War goes hot and 15mm Ancients- though this last might take more work just sorting out how many Greeks Shaun and Jim have between them!
Now no mention is made of rules or "games" here as we would tend to tailor the rules we used to the period and scenario- especially if we are doing a public demo. At least one of the crew would be a dedicated talking head- usually me but all of the crew are capable of, and will talk to interested parties - unlike so many demos I see at shows where you are often ignored and- extremely -shouldered out of the way (that would be a pillock in a flying helmet at Derby a year or so back- tosser... I let him live.)

Equally there will always be someone at the table unlike more than one game I saw at Partizan last weekend, though to be fair most of the games were manned all the time and of course, being Partixan I saw none of those "introverts R us " board/card/boutique/skirmish/usually sci-fant games that are sometimes a feature of smaller show(not so far at Durham though) seemingly put on by clubs who just want to play the same game in a different room from their usual club night. Not really appropriate for a show that punters- however few or many- pay to get into. If that kind of crap gets to be the majority game type at shows, then goodbye shows. I don't care if they are "fun to play" ,  A bunch of mumbling unwashed around a 2 foot square board littered with cards is hardly impressive or inspiring and maybe a little hard on the olfactory organs as at York. So we don't do that because it is self centred and pathetic  and if that is being judgemental then I am JUDGE DREDD! .
(I was going to say Judge Jeffries but you have to have read a book or two to know who he was)


Nevertheless I am quite proud of our little group and what we can do with just a little effort. So as always I am quite looking forward to the Durham show.
As for the game my personal target was 120 finished singly  based 40mm figures plus a couple of guns. I have exceeded that by a little with a fortnight to go and some blokes still on the painting table. Jim the Builder will add around 30-40 more figures. Rules will be deliberately simple - but hopefully not simplistic and the table action should actually resemble a 15th century encounter. (so not rampant then) Basically the rules will be an altered version of Tony Clipsom's set Foray but with Imperial measurement instead of metric- somehow it does not seem right for medieval England to be in Millimetres !
Now as inn previous years you can order stuff for me to bring to the show- pay on the day or previously  your choice- though I won't have card facilities on the day as I'm not trading.
Contact me on info@oldgloryuk.com

Email ThisBlogThis!Share to TwitterShare to FacebookShare to Pinterest
Labels: 40mm, Battles, Shows, Wars of the Roses.