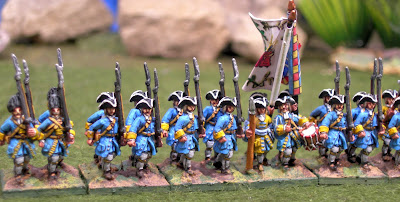 Well its dammned ticklish- just when I thought I'd sorted out how I was going to finally approach Marlboroughs wars I get stymied. I mean you don't expect it do you? A mate of mine John Reidy by name- known to at least 2 folowers of this blg- vpainted a battalion of the new Bluemoon 15mm Marburians for me - for my display case at shows. I ummedd and arred over flagging and basing them but finally did the deed- dammed fiddly it was too but worth it as you can see from the picture - yep those are 15mm. Grand paint job by John I only added the "smoke and Mirrors" but the end result is a bit tasty. Now the problem with 15mm is like any of the shorter dudes you need loads of 'em to get the effect but it has to be said that I've 25mm that didn't look this good so I think I'll have at least a few more units . This won't stop me painting those Drabant 40mm though but these little fellas are dammed tasty all the same.
Posted by Big Andy at 02:58