This won't do- write me down a victory!! 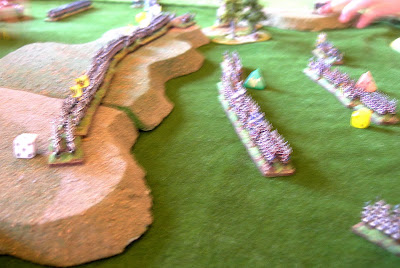 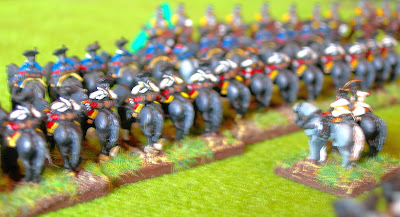 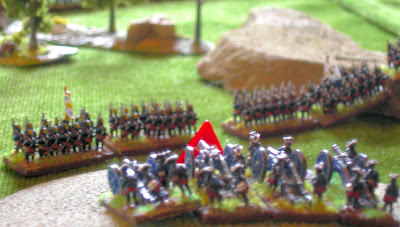 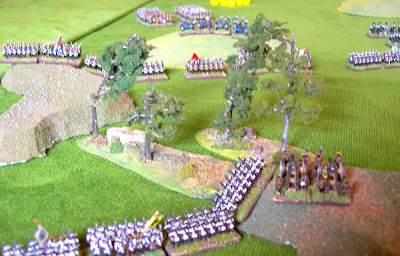 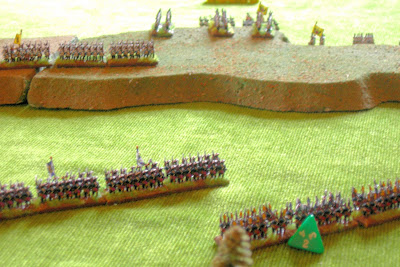 - From the diary of General Hertz Van Rentaals Saturday March 26th. Now I have entered the service of his majesty Frederick of Prussia it behoves me to tell you dear Diary of an action fought this day against the Austrian army commanded by my one tome comrade Avis Van Hire also from the United Provinces. ....
For the record this game - umpired and run by Jim Main and using his superb 10mm collection had a toal of 5 players, 3 Prussian and 2 Austrian. The Austrians had 48 infantry stands - each of 14figures in 8 6 stand Infatry battalions 3 cavalry regiments of 4 stands each - 4 figs to a stand and 2 guns . The Prussians mustred 11 Infanrty regiments at 4 stands each - so 56 little men per battalaion 4 cavalry regiemtns and 4 guns. Rules used were AOR - mostly unmodiefied. Each stand represented the usual 3 figure AOR base so the number of little men was- in this case for the look of the thing- in which they suceeded admirably.
now back to Van Rentaals Diary. I disposed my forces in4infantry Brigades with the bulk of the cavalry on my right to my left front the Austrians skulked behind the mass of the Largerberg ridgeand our right outwinged them.They somewhat outwinged me on my left but such was their defensive posture that it concerned me not
After a little prelimenary movement the action commenced in earnest with Prussian cavalry charging the slowly emaerging Austrian Horse and after a sharp figt putting some- but not all to flight. In the left centre the Prussian guns gained the height of a small hill withing range of the Largerberg and commenced to batter the Austrian Infantry. The Prussian guns would perform somewhat above the norm all dayand effectivly accounted for 2 of the Austrian Infantry units.
Meanwhile on the right the Austrian horse- albeit weakened had rallied somewhat and while a major and prolonged firefight ragres along the main infanrty lines sought to hold the Prussian horse and even put in a couple of spirited charges against hard pressed prussian foot - capturing a brigadier in the process. However this brave action saw the end of the Austrain horse and with Prussian Hussars rampaging about their reras areas (OOOH Ar missus !!) and the rally Prussian Kurassiers again beginning tpo threaten the remaiming Austrian foot began to draw off..
The firefight in the centre had been long and bloody and had it not been for the preformance of the Prussian guns the day had gone hard for the Prussian foot. As it weas their weakend conditiion led to a most lacklustre follow up . Indeed there seemed to be a heavy sigh of relief about the Prussian camp as the Austrians staggered off into the dusk.
The actual game was fiarly fast running - starting at 1 pm and finishing around 5 - including beer, fag and buttie breaks.( alas gentle reader some of our bretheren still use cigges!!).
On the photos the dice next to units are casulaty markers so in AOR termsthe Austrians had 16"hoits" before a battalion was wiped out the Prussians 12 - though no unit on either side was actually wiped out- it was close a couple of times though!
All the figures were from the Old Glory 10mm range the infantry come in 5 figure strips which are- as Jim has proved easy to cut- his infantry bases have 14 figures on them . This makes for some fine lookin units - real linear warfare indeed.
I'm in the chair for the next game- hopefully sometime in April I have absolutly no idea what will take my fancy by then.
Posted by Big Andy at 04:50