Sonn to be added to my slowly growing 15mm modern range will be these fine landrover variants. They are such that a simple painjob can make them anything you kije from  the 1960s to well now really . The short wheelbase will do duty in civilian police and military roles all over the planet ad to a slightly lesser extent will the long wheelbase variant. You will be able to choose softop or hardtop and there is a box body 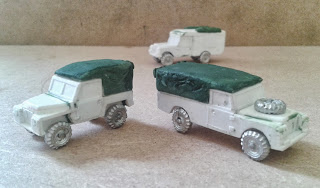 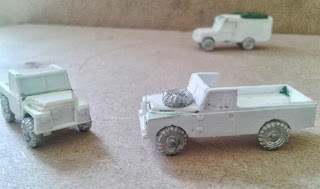 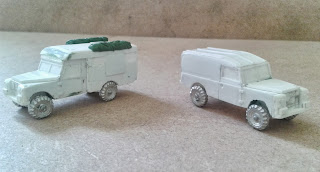 for the LWB variant as well. Ade has done a cracking job . These will of course go with the Rhodesians, Falkland War British  BAOR- again using the soon to be released Falklands Brits. Various African nations of course. Tons of civilian and quasi military usage. The box body variant gets to be an ambulance.
More of the falklands range are now being sculpted- Mortars 50cals Milan as well as Infantry  weapons and command packs for both sides. As for vehicles Scorpion Sabre and Scimitar variants are all under construction as well as- a bit further down the line this -a 1 tonne Landrover.
Hope to have these landrovers available in time for Smoggycon- if not a bit sooner.
Posted by Big Andy at 02:18