2 of this months magazines plopped onto the mat this morning and they show such a massive contrast in style that- were I a newcomer I'd wonder if each magazine did not showcase a different hobby were it not for the use of the word "Wargames" in each magazines title.
.
Wargames Illustrated.
The usual busy SHAZAM-KAPOW  style and mostly short  lightweight articles for the hard of thinking. Fantasy/Sci-Fi heavy but also with a few short rules reviews/infomercials - the one for the new Napoleonic set "Over the Hills" actually being of considerable interest though written by the rules authors.. There were pretty- but small- articles on Flodden and the siege of Athlone. My good friend Mike McNally's books on the Boyne and Augrim which I have made this article a bit superfluous for me and to be honest more than a little lightweight  but not a bad starting point .
I suppose the 3 fantasy/sci-fi skirmish articles might be fun if you are 14 (or have a similar mental age)and indeed might be fun once at any age but the joke wears thin pretty quickly.
There is good stuff in the magazine but as usual it is obscured by the flashy style over content outlook.
perhaps my tastes are changing but I really do find the over reliance on eye-candy rather wearing. Despite its thickness in pages its content is somehow thinner and rather lightweight.

Now the contrast here is considerable- it actually feels as if this magazine is at least in terms of content put together for adults. I actually found myself reading it pretty thoroughly.. Again there is considerable non-historical content but presented by someone who is not 14 and expects you to be able to read a few hundred words without looking at a pretty picture.. Not that this issue is short on pictures but they add to the articles rather than overwhelming them.
I particularly liked the Sci-Fi article -though I don't play that particular set of rules. The Terry Wise"Nostalgia" ACW game was fascinating- and chimes in a way with my own "retro" shinyloo project  differing in the.main only that the author Mike Batten wanted to recreate something he did 40 or more years ago whereas my retro project is an attempt to do something I could not hope to do 40 years ago. Nevertheless a fine article more especially sine I had been re-reading Wise's book myself recently .
Henry's own fictional countries campaign continues with lovely maps again. This time we had a little of the Umpires perspective and yes as someone who loves "active umpiring" the Lucy Tanner affir is just the sort of scurvy trick I'd use on any player who is so thoughtless as to draft his orders in such a slipshod manner !.
Except in matters of detail I find my own approach to the hobby is quite similar to Steve Jones'. Again a nice piece
Oh and by the way Henry thats not a library THIS is (about 1/8th) of a library-  though you probably have more wargaming books than I do !! 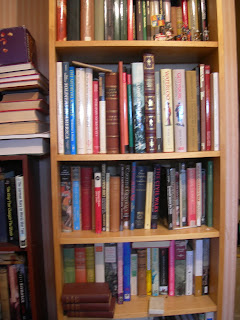 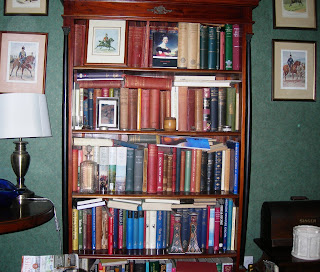 My wife Carole  upon seeing the photo of Henry's bookshelf- one of several I assume-  asked me to count my own bookshelves. There are 16 in 3  different rooms plus a few square feet on the Office floor. I keep thinking I must thin out the collection but frankly I'd rather sell off an army or two.

Anyway  this only goes to highlight even more the  differences  I perceive between to two magazines. I'm not sure that WI is actually targeting people who can read a whole book .


PS -The following day. Sharp eyed readers may notice I've upped my bookshelf number to 16 . This is simply because I missed a wall full  when I (mentally) counted up. Said wall had my KRRC Chronicles and a good chunk of my "India" section, not to mention my JSAHR journals and most of the actual "wargaming books"-a mere half a shelfs worth and ALL of my full run of Tradition magazine. So I should have gone upstairs and counted the lot in the first place- memory is a falliible thing.
Posted by Big Andy at 06:23