Regular readers of this will know that I'm a big fan of the 40mm figures from Drabant Miniatures of Moscow. So much so that when they first appeared I wasted no time in Contacting their supremo Nick and buying some bth for myself and as a trader. Since then time and distance permitting I've tried to stock all they do to a greater or lesser extent - depending upon loval market popularity. Nowe as you expect I'm always a bit behid- there are about half a dozen figure I don't have yet- that soon to be fixed. Now in my view these fine figures deserve to be more popular than they are but- and its an aficionardo here 40mm is never going to be as popular a scale as so called "28mm" . That's just a fact of life . Nevertheless hold on to you hats for Drabant are doing a 28mm rangeand here are some pictures of the first few. 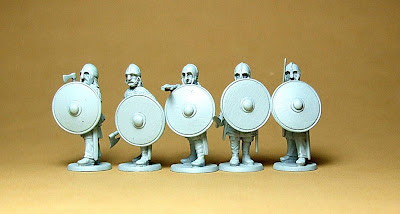 The first release in this new 25mm range will be Dark ages Saxons- eventually covering the whole gamut from Sutton Hoo to Hastings. Normans and Vikings are to follow. Now I'll be carrying these as they appear. and UK prices will be about the same as say Gripping beast at about £5.50-£6.00 per pack of 4 , Not bad IMHO for imported stuff. Now despite the fact that my own Dark Ages stuff is in 40mm I'll be having some of these- probably for King Alfreds campaigns.. or maybe Athelstan. Here are a couple of pics of the painte Saxon thegns just to whet your appetites 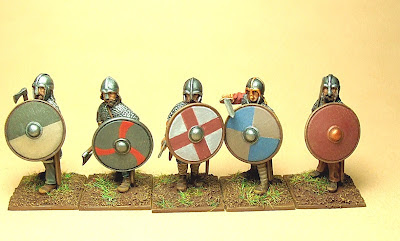 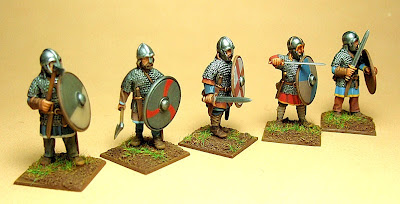 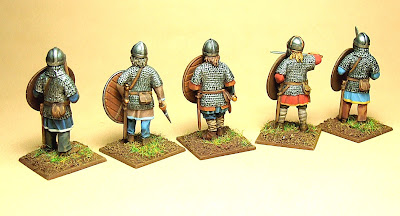 Now these are pretty impressive- not my painting I hasteb to add but Nickolay Bokarev. I'll be taking orders for these closer to the time of release but having a cruel streak I just want to set your glands going.
Posted by Big Andy at 02:43