The Second Battle of Theakstons Folly

Saturady the 18th August- temporarily 1643 saw a smaller than normal number of TWATS gather at the pub for this months game Farmer Dave and Lawywr Tom had cried off so present were Floating Jeff Andrew the Tekkie Scribbling Steve and your gentle Author- who as Umpire might well be forced by brute circumstance to be anything but gentle. For the first time this Year I decided to run an ECW game. Rules used woud be forlorn Hope as I simply have not yet found a better commercial set- and to be honest I like these so much that a little tinkering aside, I couldn't write a better. I've heard good word about Pike and Shotte - but as it comes from the Black Powder stable the 30 quid price tag for a 10 quid set of rules is a bit off putting. I might try FOGR but not for ECW. So to battle. The scenario was based loosly on the 1st Newbury campaign but the available forces and briefings were as follows. First the Royalists.
The 2nd Battle of Theakstons folly 1643. A Scenario for Forlorn Hope. GOD SAVE THE KING!! The Year of our Lord 1643 18th September The Rebells have relieved the Town of Ambridge and are seeking to make their way back to London. This we must prevent From Ye Lt-Generall of the Horse 20 th May 1643. “Ye Horse are in 2 Brigades Not including His Mat’ies Lifeguard who are fit for service. As for ye others there are somme who will doe goode sevice and yt some who are but new Troops howsoever being mostly little gentlemen and their servants think themselves fine fellows of souldiers but yt they have seen noe service.” From Ye Major-Generall of Ye Foote. 19th May 1643. “Ye foote are mostly fit for small service consiting of 3 Regiments. Wee could wishe for more shott and there are few corselets among Ye Pikes.” His Mat’ies Lifeguard of Horse.GALLOPERS TRAINED/ELITE 12 figs The Earl of Carnavons Regt. of Horse GALLOPERS TRAINED 24 in 3 TROOPS OF 8 Sir Thos. Astons Regt. of Horse.GALLOPERS RAW/ELITE8 in a single troop. Lord Northamptons Regt of Horse GALLOPERS TRAINED 24 in 3 troops. A Company of Dragoons Trained 10figs Col Chas. Gerards Regt. of Horse.GALLOPERS RAW/ELITE 16 in 2Troops His Mat’ies Lifeguard of Foote TRAINED/ELITE 2to1 48 figs Lord N’thampton’s Regt. of Foote RAW 1 to 1 44 Sir Wm. Pennyman’s Regt. of Foote TRAINED 3 to 2 52 A Saker ARTILLERY TRAINED ------ 1 medium gun & 4crew. LEADERS. Prince Rupert of Ye Rhine Ld Generall lv2. Ld George Goring Lt. Generall of Ye Horse. Lv2 dropping to lv 1 after lunch ’ cos he’ll have had drinke.” Colonell Sir Chas Gerard. Lv1 The Earl of Nor5thampton. Lv1 And May God Have Mercy upon Ye for Ye UMPIRE shall nott. and the Parliamentarians For God and Parliament!! The Yr of our LORD 1643 September 18st. The Malignants bar our way to Lomdon If yt please ye Almighty wee shalle prevaile. They are mightier in horse than wee but oure Foote are better menne . As Lord General of the Forces of ye Rutshire Association yt is your task to engage ye malignants and continue your marche to London.. Youre forces consist of. The Lord Generals Regt of Foote VETERAN 2 to 1 96 figs Coll. Dezil Holles Regt. of Foote TRAINED 1 to 1 88 figs e Lord Generals Lifeguard of Horse CURASSIERS TROTTERS TRAINED/ELITE 10 figs Col. Arthur Goodwins Regt. Of Horse.TROTTERS TRAINED 24- 3 Troops of 8 figs each Col Robert Balfours Troop of Cuirassiers. Cuirassiers Trotters Veteran 8 figs in a single troop. May brigade with Ld Gens Col. James Wardlaw’s Regt of Dragoons Dismounted Dragoons TRAINED may use open order 30 3 companies of 10 figs each Commanded shot Foot Trained 15figs 3 guns Artillery RAW ----- 3guns and 9 crew. LEADERS. Ye Ld Generall lv 2 Ye Major Generall of Ye Foote lv1. Ye Lt. Generall ofYe Horse lv1. And May Ye Lord of Hosts have Mercy upon you for the Umpire shall not!!.
I'd deliberately built in a problem for both sides. The Royalists had a force geared to the Offensive - yet their brief argued a strategic defensive. For the Parliament the precise opposite was the case. Right from move 1 the Parliamentarians hugged their baseline- I'd structured the game aling the long axis of the table as I wanted to see if the Roundheads dare advence -even with moderately secure flanks against the masses of Cavalier Horse- not so after lining a hedge with Dragoons and Commanded shot and sticking their guns out on a limb- of which more later- they stayed put leaving the Royalists to advance along the table 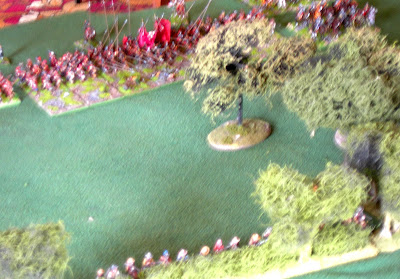 this pic shows the mass of Royalish Horse that seemed to mesmerise the Roundheads.

The first picture sgows the Parliamentarian position. They would hardly move from here for the whole game. 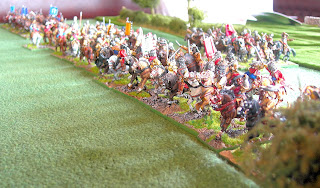 The Royalist horse began a long advance- outdistancing their foot and gun by some way. Nevertheless the foot toiled manfully to cover the distance. Thefirst action was on the Parliamentarian left where they had placed their 3 guns . These raw gunners looked askance at the total lack of support they had been givenand were not amused. On the Royalist side Lord Northampton crid "God and King" and led his troopers in a charge for the guns... Finding himself alone(Floating Jeff threw a 1 needing anything but to charge) His Lordship went back to his muttering troopers to try again. Charge ..." nope sorry don't fancy it Guv..." - Jeff unbelievably threw another 1 in the following turn as well. In the meantime the gunners had opened fire removing 2 troopers from the regiment and finally stinging them to action. The poor gunners- having done their part departed -standing not upon the order of their going. Lord Northampton had captured all 3 parliamentarian guns. this was to have consequences. 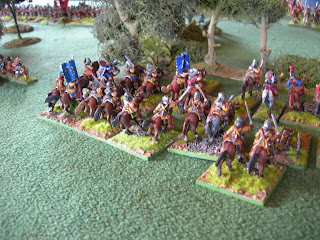 In the centre the dragoons of both sides bickered over the hedgeline but the destruction of the roundhead artllery caused 1 company of Warlaw'sdragoons to retire and a second to halt disordered. The Royalist drsagoons- supported by Horse were able to insert themselves into the gap thus created and enfilade the roundhead line. The Floodgates now opened,as the Royalist Foot came up and engaged the Roundheads in the hedge the rest of the Cavalier horse flooded through the gap. The 2 troops of Rounhead Cuirassiers put in a charge but despite manful resitance it was clear it wasn't enough. By hugging their baseline the roundheads had sacrified space and couldn't manovre. Even if they beat the off the first attacks of the royalist horse there were plenty more- at this point Andrew the Tekkie conceded. 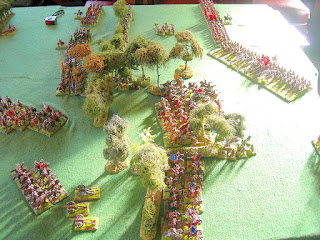 The final picture shows the position when the roundheads conceded. My own view here is simple the roundheads should have advanced.- their Foot were far supieor to the Royalist and they could have filled the table from edge to edge- supporting thier outnumbered horse with shot and Dragoons. This would have forced the Royalists to react. Insted they adopted a snail mentality curling up insdie their shell and aloowing the Royalists to do as they pleased.
Posted by Big Andy at 05:37